The Tale of Peter Hain, the Aga, the Holiday Home & Apodemus Sylvaticus

When Peter Hain hit the headlines in October 2013 for claiming £4571.74 for electricity and oil heating bills on his "second home" in Aberdulais, Neath he offered the following explanation:

“I have spent £8,000 putting in solar panels at my own expense and my electricity bill is one of the lowest. But where I live means I can only use this type of heating oil, which is also true for a lot of my constituents. This one is not my choice.

Everything I have claimed has been within the rules. I need to have a second home in order to do my job. This has all been properly done.”

This claim was the second highest of the 650 MPs in Parliament, and he has been one of the highest claimants in years gone by as well. He was by far the highest claiming Labour MP with regard to such costs, and was just "beaten" by millionaire Conservative MP, Andrew Robathan who claimed only £15.06 more than Peter Hain.

Immediately below Peter Hain in the rankings was another millionaire Conservative MP, Alun Duncan who claimed £3998.06, or a full £573.68 less than Mr Hain.

Notwithstanding the benefits of solar panels, Mr Hain's electricity bills still seem quite high.  Mr Hain also took advantage of a grant for installing the panels, paying £8000 of his own money but getting works carried out to the value of £16000. So the taxpayer actually paid 50% of the cost of these works. 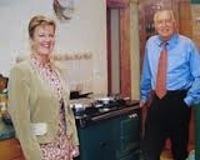 Mr Hain (left with his wife Elizabeth) runs an Aga which they use for cooking. These appliances are notoriously fuel inefficient.

When Mr Hain has said "this is not my choice", well actually using an Aga appliance is his choice. A modern electric cooker is far more eco-friendly. But then, he is on record as saying that food tastes much better cooked on an Aga.

"At first I was a bit sceptical about the Aga. I thought it was a great big lump. But now I actually think it's fantastic. We found food cooked on the electric cooker tasted very second class." 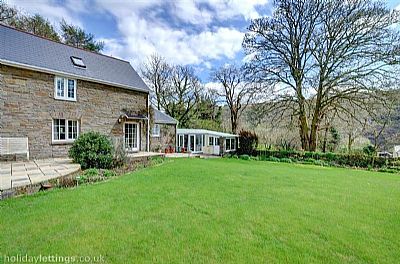 Curiously, what Mr Hain never seems to have mentioned was that these heating bills were doing more than keeping just himself and his wife, Elizabeth warm. For as far back as 2010, possibly even back to 2008, Mr Hain has been offering a holiday let at his address as well. 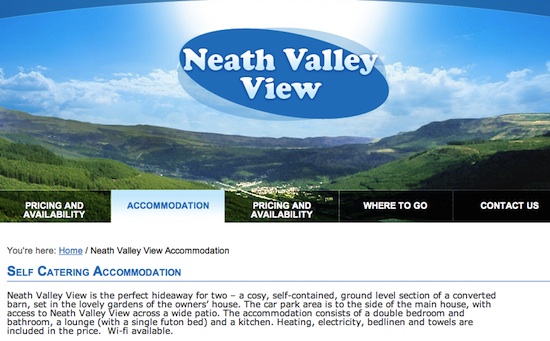 The holiday home is known as Neath Valley View. If you are tempted to stay there, then if you are squeamish first check out what the situation is regarding the mice. This is because sightings of these were mentioned in one of the few reviews that have been written about the premises. As it's a countryside location these are likely to be the rather cute long-tailed field mouse or wood mouse as it is alternatively known (Apodemus Sylvaticus).

One of the attractions of staying at the place is that once you have paid the rental fee you should not be burdened with any additional, unforeseen costs. The advertising blurb makes it clear that the oil central heating at the premises is provided off the landlord's system and since Mr Hain's oil bills (and lots of others) are met by the taxpayer, then anyone staying there, would, on the face of it, have been subsidised by the taxpayer.

Mr Hain has however apparently entered into an arrangement with IPSA, the body responsible for overseeing MPs' expenses since 2010. Under this arrangement he submits a cheque annually to the said body. This cheque seemingly is to reimburse IPSA some element of the payments he has received for the holiday let, although nowhere in IPSA's public records is there specific mention of a holiday let - only Mr Hain making repayments with regard to "a sublet". This article has assumed that the sublet and the holiday let are one and the same. The basis of calculation is unknown, as are all the elements of Mr Hain's bills (e.g. electricity, oil etc) that are included in the payment figure on the cheque.

Set out below are the repayments by cheque made annually by Mr Hain since 2010.

Business may have been bad last year. The repayments to IPSA are the lowest ever made. Maybe people have been discouraged by the review that highlighted the mice?

IPSA Repayments - What is/should be included?

Set out above is information re oil and electricity claims but it is surely wrong to believe that these are the only figures that should be built into the repayments calculation. What about water charges, for example? It is understood that there is an element of these within the repayments to IPSA but again we have no idea what these amount to or the basis of calculation. What of the Wi-fi facility offered to holidaymakers? And house insurance? Mr Hain's insurance bills both for his house and his office premises are again some of the highest in Parliament. Why should this be? His annual house insurance premium claim for reimbursement in 2013/14 was £1124.62. Has the fact that there is a holiday letting at the premises been recognised in this premium payable, or has Mr Hain taken out an entirely separate policy for the holiday let?

The holiday let was constructed as part of building extension works that received planning permission in March 2005. These works entailed in the main the construction of a new granny flat, plus a new "party area" above the garage of the premises. Around this time, records of Mr Hain's MP expenses show increased payments on the interest on his mortgage, such costs having been reclaimed as part of allowable expenses through the Parliamentary authorities. The interest paid for the last month of 2004 was £375; for the first month of 2005 it was £975. Was this as a result of increasing his mortgage to fund the development?

In all the criticism over many years levied at Peter Hain with regard to his energy claims he has seemingly never said as an explanation - well look, part of the reason is that we let out a wing of the premises to holidaymakers and my house running costs are inevitably inflated as a result - but I pay these back in accordance with an arrangement with IPSA. Why he has never said this is a question only he can answer.

(This article was drafted by Stan in July 2014 for inclusion in his weekly column in the Neath Ferret. Many thanks for the help and assistance in its production offered by like-minded individuals - you know who you are.)