Beyond the profile is Peter Hain the author of many books (see menu bar), as well as his numerous newspaper articles and television appearances.

He has been recently registered with Clive Conway Productions Ltd, a corporate and motivational speakers' agency, and Hain has already done some work via them early in 2014. He is also advertised as being involved in events later in 2014.

He delivers lectures to South Wales universities on a range of topics.

(Video of lecture can be seen on above link)

Peter Hain has financial interests in South African gold mining with a non-executive directorship working for Amara Mining, as well as being a shareholder in the company (see Amara Mining in menu bar).

There is also the Severn Barrage and the hope that a future government will take an interest in it. Peter Hain resigned from Ed Miliband's Shadow Cabinet in order to focus on supporting and bringing forward the Barrage project.

He campaigned vigorously on behalf of Hafren Power to persuade (unsuccessfully) the existing Government to support the scheme (see menu bar).

He is now also registered as an Advisory Board Member of Developing Market Associates Ltd, a social enterprise promoting investment and development, especially in Africa with agencies including the World Bank (see menu bar -  Financial Interests).

He is a non-executive director for African Potash Ltd who are in the business of identifying potash reserves within Africa, and the subsequent mining and sale of the fertiliser.

Letting out the "granny annexe" of his home in Aberdulais as a holiday home is yet another venture - see the full report in the menu bar.

Notwithstanding all the commitments on Peter Hain's time imposed by the above, he has a wide range of leisure interests that he pursues, referred to in the menu bar. 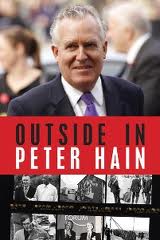 When all is said and done Hain’s vanity is so blatant and persistent that one just accepts it as a rather amusing and almost endearing part of his persona. Every politician has to cultivate some sense of his own worth and has to develop a coherent and acceptable image. Of course, Hain had to deal with being an ‘outsider’. He chose to live in another country and to abandon the role of protester as he entered mainstream politics, first in a small party and then in one that was capable of forming a government. In reliving this process I think Hain rather overdoes the relevance of his rebellious past, for the 1960s were a general period of protest and this country is full of successful business people, vice-chancellors and politicians who would be reluctant to discuss their 1960s values and lifestyles. What emerges from this book is that Hain being an outsider was far more of a psychological question than one of political extremism.

Read the full review and the response: