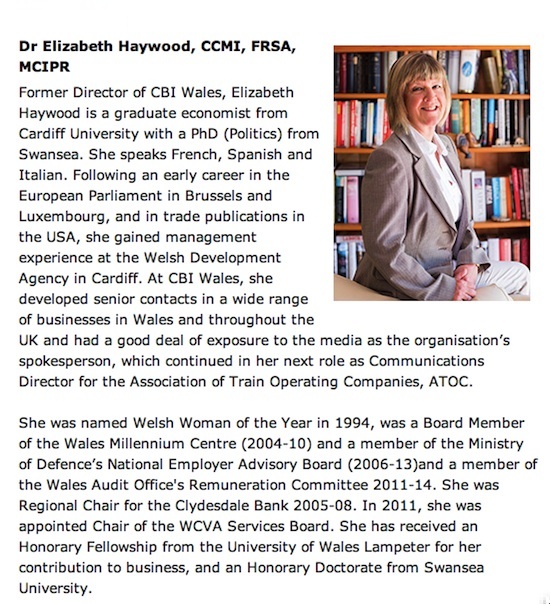 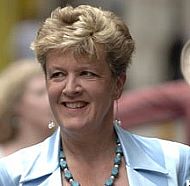 Before establishing Bosshunters*, Dr Elizabeth Haywood spent seven years as Managing Director of kmc, an international recruitment company specialising in scientific management and regulated industries.
Elizabeth, wife of Peter Hain MP, is a graduate economist from Cardiff University with a PhD (Politics) from Swansea. Following an early career in the European Parliament in Brussels and Luxembourg, and in trade publications in the USA, she gained management experience at the Welsh Development Agency in Cardiff. As Director Wales for the Confederation of British Industry, she developed senior contacts in a wide range of businesses in Wales and throughout the UK and had a good deal of exposure to the media as the organisation’s spokesperson, which continued in her next role as Communications Director for the Association of Train Operating Companies, ATOC.
She was named Welsh Woman of the Year in 1994, is a Board Member of the Wales Millennium Centre and a member of the Ministry of Defence’s National Employer Advisory Board. She received an Honorary Fellowship from the University of Wales Lampeter for her contribution to business, and was Regional Chair for the Clydesdale Bank 2005-08. She is a Companion of the Chartered Management Institute, Fellow of the Royal Society of Arts and Commerce, and an Associate of the Chartered Institute of Public Relations. She was also awarded an Honorary Doctorate from Swansea University in July 2014.

A light hearted look at the wedding by Just STaN, columnist on the NEATH FERRET 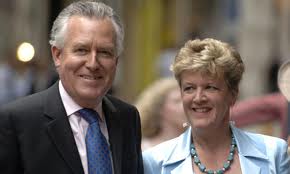 When Peter Hain tied the knot with his second wife, Elizabeth at the Towers Hotel in June 2003, they named the wedding tables after South African freedom fighters. Obviously Nelson Mandela was one table (I assume the top table). Others that appear in Peter Hain's memoirs were Walter Sisulu, Donald Woods and (rather in poor taste in my opinion) John Harris.

(John Harris was executed in South Africa in 1965 for his part in a bombing which resulted in the death of an elderly lady. Her twelve year old daughter was maimed for life by the explosion).

According to Peter Hain the atmosphere at the wedding-do was "terrific", Roy Noble acting as MC, with a "rasping vignette from the Welsh comedian Max Boyce, a constituent from up the valley in Glynneath, who ribbed everybody, not least me".

Sounds like that was the place to have been that day. So sorry I missed it.

I also missed the Hains' London wedding party which Peter Hain states was attended by David Blunkett, but "no other Cabinet colleague showed". Perhaps they'd been pre-warned about the names on the tables and wanted to avoid potential career-ending embarrassment? Interestingly, Blunkett is on record as saying "if there's anyone who upsets colleagues more than I do, it's Peter". So in fairness maybe that's the reason only Blunkett turned up and it had nothing to do with the tables after all.