As his works became more popular they were issued as albums, some especially composed, others collected together by his publishers. They included; 'The Royal Albums', 'Premier Selection Albums', 'Rosie's Musical Albums', 'Merry Moments volumes 10 and 22', 'Favourite Waltzes volume 12', and 'Daisy Albums', to which he was a major contributor and which reached at least volume 58.

With success, Ezra began to see instrumental teaching as a part of his role and he produced tutors for various instruments - his 'Easy Pianoforte Tutor' was still in print in the 1970s. Always an early riser, Ezra found time to write ,'A Catechism of Music' for students, an examination book used in Australian music colleges and several other works on the rudiments of music, harmony and composition. He was also the music editor for several journals.

At some time, possibly during the Boer War, he was a band master, but little information has come to light on this aspect of his life.

Ezra Read's compositions were intended to be played by the amateur pianist entertaining family and friends round the parlour piano. Piano teachers soon found that his melodic tunes and straightforward harmonies made useful exercises for their students and used them widely.

Current events were major sources of inspiration for him. Already mentioned were his popular pieces based on the Boer War, but he also wrote, 'Australia - a Grand March in Commemoration of the Federation', 'The Coronation of King Edward VII Grand March', ''The Call to Arms', 'The Royal Military Tournament', and many other pieces based on the news of the times.

During his lifetime he composed hundreds of marches and waltzes, dozens of 'descriptive fantasias', such as, 'The Miner', 'A Charabanc Ride', 'The Football Match', 'Christmas Bells', 'Fireworks', 'Fire! Fire!', 'The Midnight Express' and 'The Wedding Day'. Gallops, polkas, schottiches, mazurkas, barn dances, gavottes, reels, hornpipes, quadrilles and even a few sand dances and ragtime pieces flowed from his pen. Some of these were later reissued as piano duets, or piano accompanied pieces for violin and other instruments.

'The Catalogue of Printed Music in the British Library', available in main libraries, lists almost 400 of his works.

The National Library of Australia lists a holding of over 80 items of his sheet music, some of which can be downloaded on the internet at www.nla.gov.au/catalogue.

The Derbyshire Records Library, in Matlock, Derbyshire, holds 'The J. L. Noble Collection' of over 50 of Ezra's pieces, together with over 50 more pieces donated by Joseph and Simon Read. 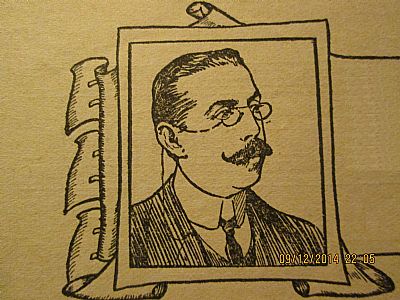 This sketch of the editor of Musical Home Journal was published in the periodical about 1900.

Could it be Ezra Read?

(With thanks to Kim Evens)