A BRIEF LIFE OF EZRA READ

Born in Willenhall, Staffordshire, of James Read, a master lock maker, and Mary Read (formerly Mary Brevitt), Ezra had three older brothers, James, John Colley and Eber. James followed his father's trade, but John Colley, Eber and Ezra were apprenticed to a blacksmith at an early age. They were, however, also expected to help out in their father's workshop. Of Eber there is no trace after the 1871 census when he was eleven years old.

Lock makers worked long hours bending over the vice using the file and hammer. Their cramped and crowded working conditions were Dickensian in their squalor. It was fortunate, then, that James, the boys' father, was forward looking enough, not only to have his three younger sons trained into a new trade, but also to arrange piano lessons for John Colley, who, in turn, taught his brother Ezra to play.

Most surprisingly, considering their background, both John Colly and Ezra became accomplished performers on the piano and related instruments, John Colley actually becoming the organist at the Roman Catholic Cathedral in Birmingham. They both had the ability to play strings of popular melodies by ear, to the delight of their friends and the patrons of the local taverns.

Ezra left his trade soon after finishing his apprentiship, intending to make a living as a pianist. He travelled with small popular orchestras and in Bristol he met Miss Beatrice Ida Hampden, a talented pianist and violinist. She was the daughter of Mr. Renn Hampden of Bath and the granddaughter of Rear-Admiral Cumberland.

Soon after they were married, in 1886, they both took a course in harmony and musical composition and both began composing. Ezra's first piece was published in 1887. His wife, who wrote under her maiden name of Ida Hampden, had her first piece, a barn dance called 'Stolen Moments', published the following year.

Over the next 25 years their numerous works were published by many leading music publishers in London, America and Australia, and by over a hundred journals and provincial newspapers at home and overseas.They are said to have written over 4000 pieces under some 120 pen names and sales of their works broke world records.

Perhaps the best known of Ezra's works was his 'Easy Pianoforte Tutor' which sold many thousands of copies throughout the world. Other successes were his 'Cinderella Waltz', of which over a million copies were sold, his 'Mafeking', 'Kimberley' and 'Ladysmith' Marches which were very popular during the Boer War, and his many descriptive fantasias with titles such as 'The Christmas Ball', 'Fire! Fire!', 'The Victoria Cross'  and 'War of the Nations'.

The couple had the pleasure of performing at the Royal Military Ball given in honour of King Edward VII, who was Prince of Wales at the time, Ezra playing the organ and Ida the piano - a musical combination which they often used when playing together.

They travelled widely throughout the British Isles and seemed to have no permanent home. While they were staying in Derby, Ida contracted an illness which led to general paralysis. She died in 1912, aged 45 years. She is buried in Nottingham Road Cemetery, Derby.

Ezra finally settled in Shirebrook, Derbyshire, where he probably felt at home with the mining community. He continued to write music for publication, but spent much of his time as musical director of the local theatre, playing in the music hall orchestra and using his gift of playing by ear to accompany the silent films of the era.

He died on October 13th, 1922, of cancer, having been bed-ridden for just over a year. Surprisingly, he was not a rich man, but he left all his possessions to the lady who had nursed him during his final illness. It is reported that his sheet music was taken from his house by the barrow load after his death. His grave is in Shirebrook Cemetery. 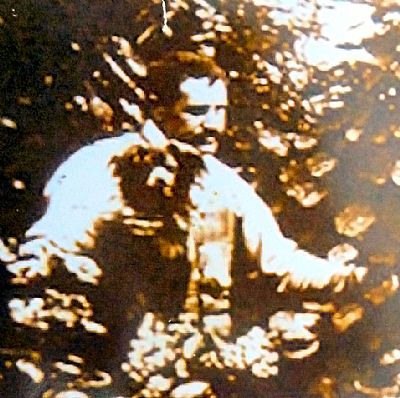 Ezra with his dog at home in Shirebrook