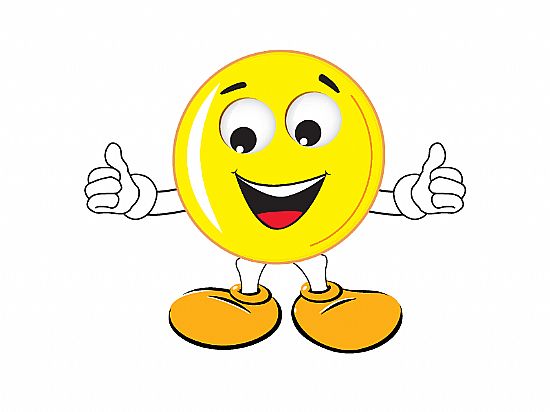 We need a volunteer from our membership to organise this famous event . 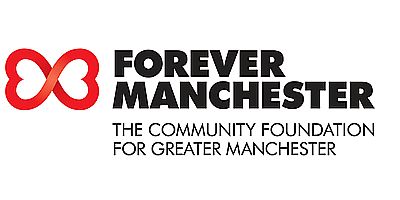 - Top photo shows Rosalyn relaxing after winning the round robin competition on Saturday. 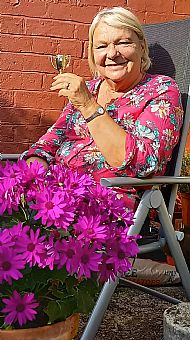 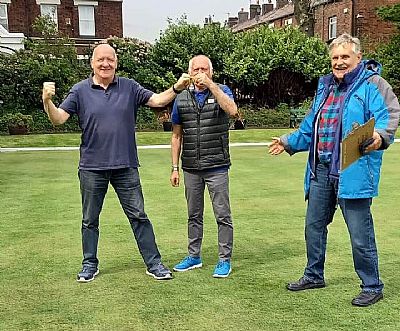 - we had a grant from Bolton CVS [ Eric Wright Group]  and some refreshments from Asda  which helped make this event. 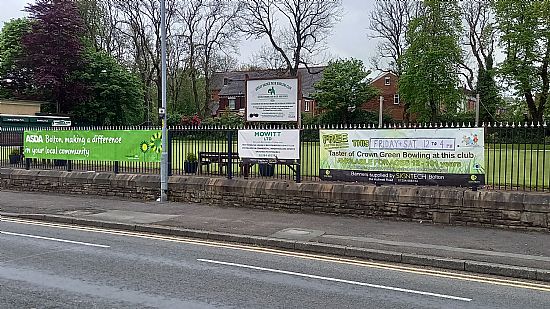 Monday May 17th competition was a great success - thanks to Terry Tansey and our faithful volunteers/supporters and those who took part in the competition.

Our top photo shows the setup of the new marquee with trestle table of sandwiches/drinks and goodies - really impressive marquee -so that we could eat and drink outside whatever the weather.

The marquee and food was sponsored by Bolton CVS

Thanks to Barrie Howarth/Johnny Mort/Dave Tadd/Kevan Latham for putting the Marquee together - it will be easier next time we do it.

Thanks to Norman Jones who kept us watered and sorted the club house/kitchen.

Terry Tansey organised the comp - couldn't be better - two teams playing a round robin match - which finished up as a draw 145 points each.

Bottom photo taken by Kevan - everyone chilling out after 4 matches each and finishing off the free party food and drink - I am sure they will sleep after that.

thanks to the players and supporters [ from left ]

We also had a number of spectators not on the photos 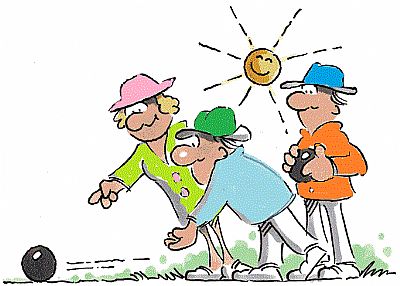 Our first competition of the season  was a huge success - some 16 members attended with Terry Tansey organising the event.

The weather was sunny and warm and everyone was in good spirits - looking forward to playing competition bowls after a break of 18 months.

Everyone got 4 rounds of bowls starting at 1.15 and finishing around 3.30 with 8 ends per round - just enough to have sore knees in the  morning for those that haven't been practicing.

Everyone really appreciated being able to mix as a number of players had been shielding and not mixed for 12 months.

We have some photos below showing players getting in the swing of things with the eventual 'aggregate winners' being Rosalyn Wilcock partnering Terry Judge with Terry Tansey at the rear - so well done Rosalyn and Terry and thanks to Terry Tansey for a well organised competition. 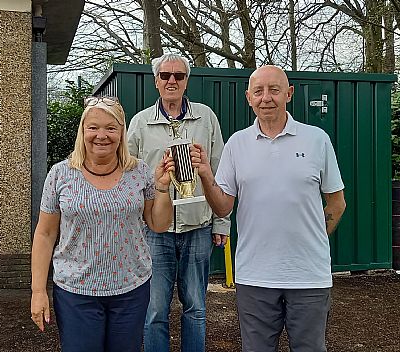 other photos of the day are shown below 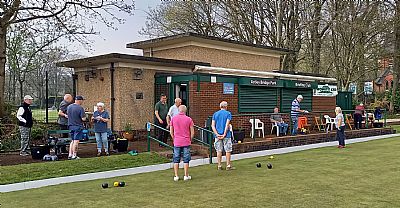 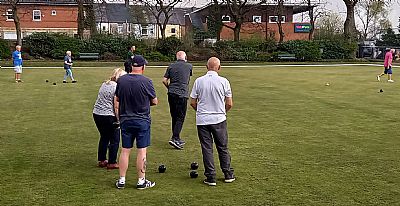 The competition was organised by Chic Gilbertson and the day turned out to be good - just a couple of showers which did not affect the bowling. 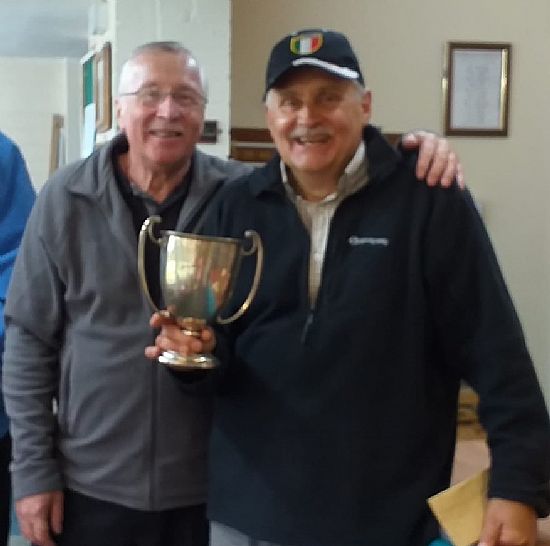 The competition was won by Kevan with Paul in the final.

Thanks to everyone who helped out with the jobs and cleaning up afterwards.

Our open/fun day and 'taste of bowling' on Saturday 22nd of June 11 till 3 pm  - was for the club and local community to come together just to have fun and it was just that as can be seen from the photos below .please

It was sponsored by

'Forever Manchester' who have helped us with funding in the recent past. 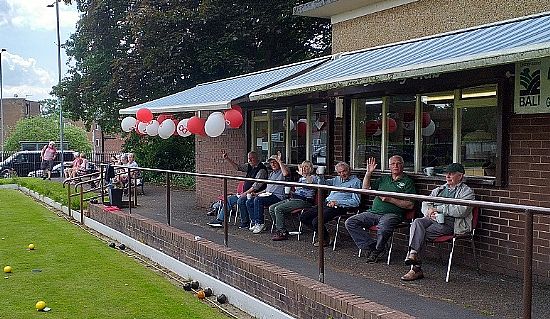 just the right start to the day - nice cuppa - and catch up chat with members and locals.

Activities in full swing - crown bowling round robin  /coaching for learners / and anything you like - well almost.

-its for French Boules - really fun game here - with Sue going on to be champion - well done.

Our regular green keeper bought and delivered the sand for us and the members put together the sand pit - what a great success.

Rosalyn and Paul putting more food on the table

- provided free to all - sponsored by 'Forever Manchester'

The food was bought fresh - prepared and delivered by local catering 'Fresh and 'Tasty' -yummy yummy - what a  great spread. 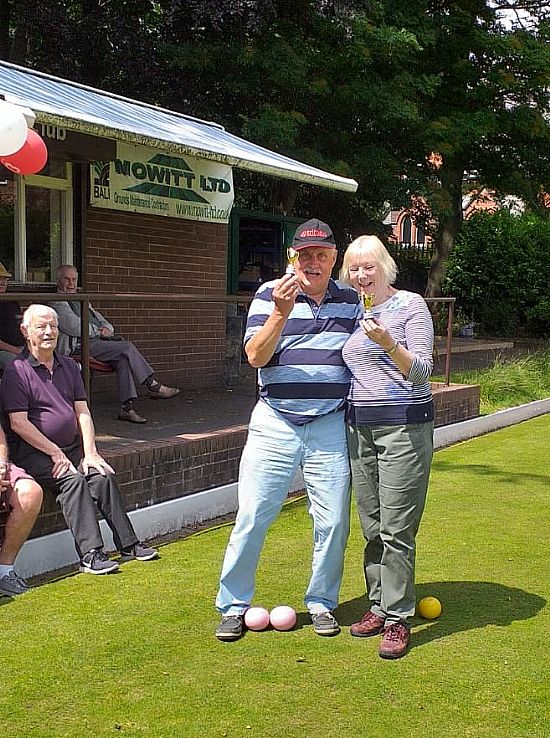 Here we have some of today's winners.

Kevan with a cup for winning the 'round robin' singles bowls competition.

Sue with a cup for winning the French Boules singles knockout.

The other winners on the day were everyone who attended the event and Forever Manchester ' who funded all the food , materials and green preparation.

Photo-shoot for some of the party/sun-lovers refusing to go home after a great day out and getting ready to tidy up after a really fun day. - Thanks particularly to Paul, Rosalyn, Norman, Malcolm, Sue, Denver, Barry for getting the preparations underway and Dave for helping clear the sand pit and me for organising the event - Kevan.

This is a great video