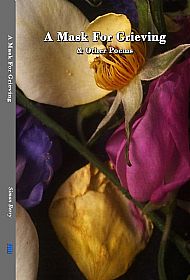 A Mask for Grieving

A Mask for Grieving & Other Poems by Simon Berry

“As the title poem suggests most of the poems in this collection are written in response to a bereavement. My wife Colleen died of cancer suddenly several years ago. She read very widely and also reviewed fiction, criticism and biography as well as painting and photographing. But her first love was poetry. I attended counselling groups but I was at first unable to find words to express grief. To confront it directly was too painful as indeed was almost any kind of writing. Then I started reading again. It was by looking through some of Colleen’s many books that I began writing poetry for the first time since student days.

“Some but not all of these 40 poems owe a debt to her favourites, and some to mine. In most cases the ‘debt’ relates to the rhyme scheme, the line metrics and even the substance of the poem. The original, whether by Cristina Rossetti or Seamus Heaney, provided me with a model that fortified and encouraged me to embark on my efforts as an apprentice poet…..

“There are one or two dangers in adopting this approach. One is that the result becomes a ‘mere’ pastiche, depending for its effect on the reader’s knowledge of the original. This may well be so. But where I may have crossed the line into pastiche (or even parody) I have tried to indicate this in the title. Whether the label pastiche negates any claim to originality is open to argument.

“There is also the other p-word that hangs over anyone involved in writing or composing: accusations of plagiarism. My view is that originality is greatly overrated and the chance of unconsciously using a phrase or a line already out there is a very real risk that must be faced by anyone finding a creative voice…….

A Mask for Grieving can be purchased for £8.50 directly from Simon. Please contact him by email: sjcberry@gmail.com