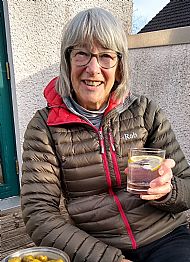 Louise James has lived in Scotland since 2003, although she has spent countless days over the years in the islands and highlands on hillwalking adventures.  She tries to ‘grow where she is planted’, drawing on her Canadian roots, as well as her twenty years in Yorkshire, to inspire her writing.

You cross the bridge and can’t resist looking down, hoping the muddy canal bottom will be hidden by rippling currents heading upstream. Then slack tide will follow, waters will retreat back to the firth. But if it’s high springs, and dusk, then, looking down, you might see an otter in the reeds that choke the wide part of the canal. But now, despite the tide there is no otter.

Walk down, see if the dipper has visited. You saw him once, on a protruding rock at the tumbling weir, dipping in and dipping out, but not today.  Onward to see the kingfisher. Holes in the bank at the railway bridge where they say that two or three make their homes, burrowing deeply, coming out to fly low upstream towards the weir. Small fish make easy quarry but the blue dart does not show itself and remains an illusion, seen by everyone but you.

kingfisher flying
low and straight as an arrow
evades detection

Teals scurry in swelling eddies, purposeful and proud of petrol coloured markings and terracotta head stripes. Moorhens obligingly prefer the canal edge, where with ungainly legs they scamper onto narrow sandbars, big feet imprinting the mud. Chicks, still sporting youthful colours, dance about before entering the water to show off their diving prowess.

Leave the mythological kingfisher burrows, then on to the shady footpath. With naked eye you pick out the stately heron, peering over the heads of waders and ducks that loiter in the tidal flow. Ubiquitous oystercatchers, flocks of redshank in their multitudes taking a breather before foraging again for invertebrates buried in the disappearing sands.

Too soon you reach James’s bridge with its melancholy story of loss and remembrance. Widgeons whistle plaintively to each other, a note of sadness to their signals that pierce the evening air. Their unvarying call stays with you and strikes you to the depths of your soul.

At last where the silted estuary meets the firth, you spot a lone lapwing, heading back up the Conon. The rest of its kind are waiting on a rapidly submerging sandbar wondering why one has left the security and safety of numbers.