The Emergent Natural Science, Art and Spirituality of Real Life

When we treat space and time as if they are quantifiable substances, divisible into discrete intervals of length and duration, we obscure the intangible depth of void stillness and continuity of energetic flux from which all tangible bodily form arises.

We entrap our true nature within a static box frame that does not actually exist, but causes us to act in ways that are psychologically, socially and environmentally damaging.

We can escape this trap, and enhance our human understanding and well-being by recognising that in reality space naturally includes and is dynamically included in substance. We are then free to live with one another within our natural neighbourhood more sensibly, creatively and lovingly than many of us are currently able to do. 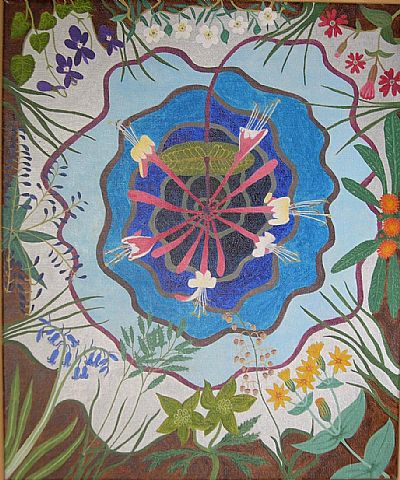 Given that the basic principle of natural inclusion can be discovered purely and simply through contemplation of what is familar to us from personal experience, it's not surprising to find it implicitly - if not explicitly - at the root of many examples of ancient and indigenous wisdom and spirituality: e.g. Taoism, Hinduism, Paganism, Gnostic Christianity and the fluid Logos of Heraclitus.

What should perhaps be much more surprising is to find this principle explicitly excluded from consideration by the 'hard line', definitive logic of orthodox scientific, mathematical and religious thought. This logic paradoxically treats material form and immaterial space as either mutually exclusive or co-extensive. This has resulted, for millennia, in a schism between 'materialistic' and 'spiritual' traditions, neither of which can make consistent sense of what, most fundamentally, we are made of. These traditions instead focus solely either on tangible, measurable phenomena or on an intangible reality that cannot be grasped - instead of appreciating the vital mutual inclusion of each in the other.

Just consider for a moment how the idea that your body consists solely of tangible matter will influence the way you relate to other bodies and your natural surroundings. Will you imagine yourself to be entirely separate from your neighbours and neighbourhood – an independent, self-contained individual entity? How then will you be prone to treat these ‘others’ that you perceive as being quite apart from yourself? Will you treat them as ‘objects’ to be pushed or pulled around by purely mechanical forces? Can you see in this the root of selfish, exploitative, competitive behaviour?

Now consider how the idea that you are indistinguishable from your neighbours and neighbourhood will influence your behaviour. What special individual contribution can you now make to the life of the community in which you belong? Can you see in this the root of unquestioning passivity and inability to respond effectually to the real problems of life?

Now consider the consequences of actually being taught by your ‘superiors’ to think and behave in these divergent ways, and not to question their authority?

Do you see the evolution of a culture of bullies and victims entrapped in a habitual mental pattern that neither can free themselves from, no matter how much they might feel the desperate need to do so for the sake of life, love and happiness? Do you see how this culture imposes these same patterns on its interpretation of natural reality as a savage ‘Law of the Jungle’? Do you see a culture divided between ‘Objective Science’ and ‘Subjective Art’, neither of which has a fully true basis in reality? Do you see a culture of needless ideological conflict between ‘me’ and ‘you’, ‘us’ and ‘them’, ‘this and ‘that’?

Do you see in this culture the story of modern human life and historical record as no less than a tragedy of epic proportions? If not, then you will not feel that anything has to change.

If you do, then you will recognise that a radical shift from our definitive ‘Whole Way of Thinking’ to a comprehensive awareness of natural inclusion as a source of wisdom is desperately overdue. You will recognise that a Science that excludes or conflates intangible from or with tangible reality is a lifeless, soulless science that definitively objectifies itself by definitively objectifying Nature:

"A scientific man ought to have no wishes, no affections, - a mere heart of stone." Charles Darwin

“For once men have been made to realize the crippling mutilations imposed by an objectivist framework – once the veil of ambiguities covering up these mutilations has been definitely dissolved – many fresh minds will turn to the task of reinterpreting the world as it is, and as it then once more will be seen to be.” Michael Polyani

Such abstract, objectifying science is actually a science for nobody, which cuts itself apart from everyday life experience and speaks in technical and mathematical language that only its 'initiates' can decipher. It is most definitively not a realistic science for everybody, and yet it is just this kind of science that has come increasingly to be 'popularised' and to dominate thinking in our increasingly secular modern human life.

You will also recognise that the kind of abstract Art and Spirituality that takes total leave of absence from our material bodies is equally unrealistic and liable to lack empathy for how we living creatures truly are in the world as it truly is.

Now consider how awareness of natural inclusion as a fundamental evolutionary principle will influence your thought and behaviour. You perceive yourself as a dynamically included participant in and unique individual expression of the natural world in which you dwell. You appreciate what you and all other natural forms have in common, yet also how and why you differ from one another. You have an individual identity that is neither independent from nor indistinguishable from others, but lives in receptive-responsive relationship with them. You begin to understand the fundamental nature of Love as receptive-responsive relationship and to recognise in that sense that you and all other natural forms are ‘made, most fundamentally, of Love’.

Now you can begin to sense how intellectual scientific and emotional understandings of life can be reconciled. The wisdom of the ‘Golden Rule’ to ‘love others as you love your self’ and also to ‘love your natural neighbourhood as you love your parents’ becomes all too apparent. You recognise yourself and all other life forms as beings in need of love and sustenance, without which you suffer and perish. All the paradoxical contradictions of purely objective or subjective worldviews fade away. Profound scientific conundrums, such as ‘wave-particle duality’, the true nature of consciousness and the relationship between gravity and electromagnetism begin to make natural sense. The socially, psychologically and environmentally damaging Darwinian misinterpretation of evolution by ‘natural selection, or the preservation of favoured races in the struggle for life’ is seen to be what it is – the product of a false premise that objectively isolates an organism from its neighbourhood instead of recognising it as an expression of its neighbourhood.

So, why would anyone want to ignore or disparage this natural principle? The reason is quite clear, but not good: the lust for and submissiveness to abusive power that arises when we disregard or misconceive what, most fundamentally, we are made of and teach future generations of adults to do the same. Greed and passivity then become our primary sources of motivation and demotivation, in place of the need and vitality to care for and sustain our own and others’ diverse lives in natural, receptive-responsive communion. 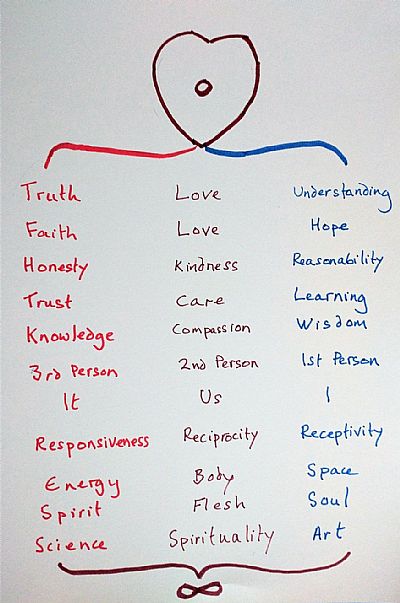