Somethings are not well known by humans about the Dalek race. Yes, you probably know that the Daleks originate from a planet called Skaro, and that they used to live in a city with metal floors so that they could move about using static electricity; but do you know other facts about the city of the Daleks?

Here is a typical Dalek city on Skaro. 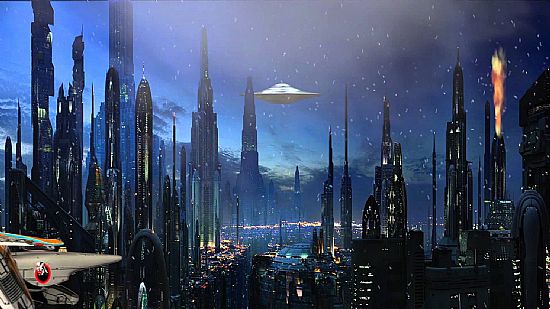 Here we see the Dalek Supreme who has been summoned by the Emperor going to the command centre. 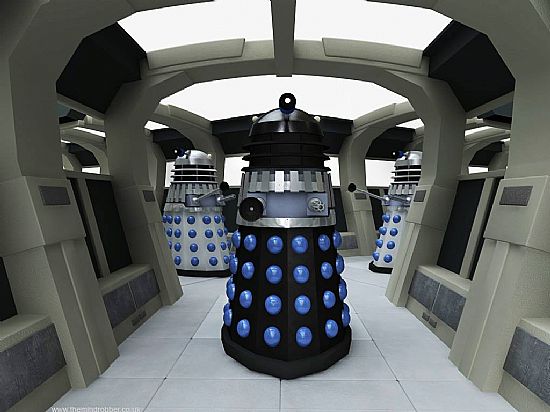 Two Dalek Supreme leaders can be seen here, although the status of the black and gold version is likely to be higher than the gold one behind him? 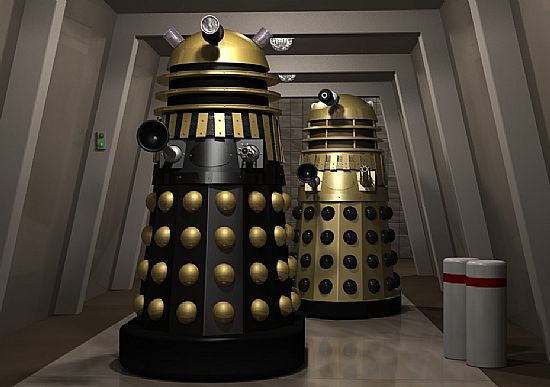 Daleks from all ages of time gather in the city on Skaro to await their orders. 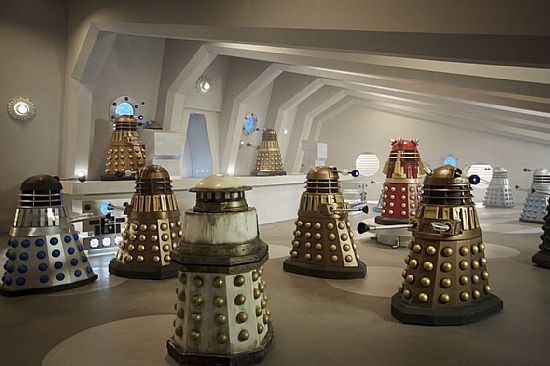 Vast sections of the city are located well below ground level. The many different levels are connected by lifts (elevators) and corridors, leading into various rooms and chambers. The Daleks do not have stairs, as these would be of no use whatsoever to a race of beings that do not possess legs or feet, and glide around in protective machines everywhere. The lifts move up and down at great speed, and when they reach the required level, can be stopped simply by touching the doors. 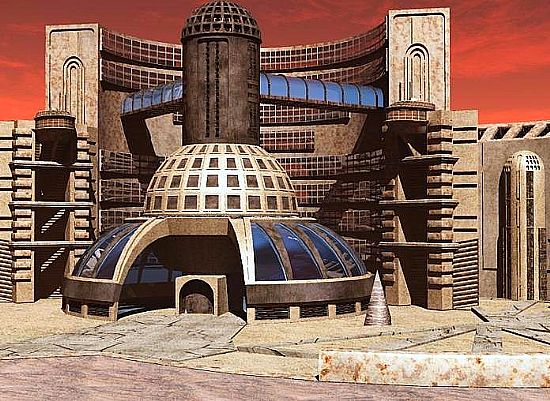 (Thanks to my good friend Steve Day for the use of the above picture.)

Gigantic nuclear plants generate power for the city. These are controlled by computer, which in turn are monitored by Dalek technicians. Power supplies are adjusted according to the needs of the city, as some areas may be held in a dormant state until required.

Deep under their city is a vast network of tunnels. These are used for Daleks to get quickly from one area to another. 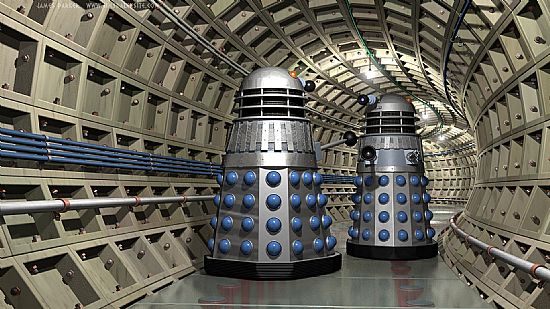 Daleks "eat" by breathing in nutrious gases, which are made from certain plant life found on Skaro. It is transformed into small dust particles which are easily absorbed in a gaseous state. These "food" gases are always carried on Dalek space ships, or if the Daleks are on another planet, their "food" can be made using certain types of pulverized plant life which is then processed into a gaseous form.

The main room in the city is the Supreme Council Chamber, located in the Main Central Building. It is here that the Illustrious Dalek Elders hold their meeting with the Emperor and Dalek Supreme. Also in the same building you will find the Radio Telescope Visualizer Room. Here the Daleks can observe events happening on other planets many millions of miles away.

Here Daleks patrol the city limits, moving silently along its corridors checking for any intruders! 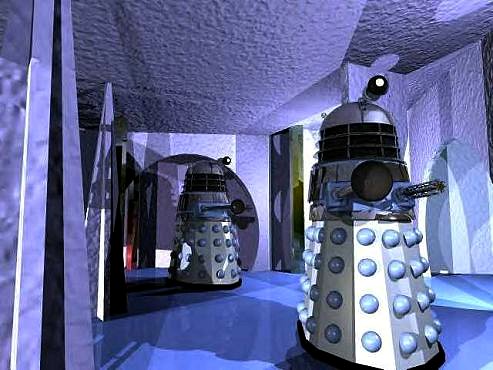 Often the Doctor visits Skaro in his TARDIS, as here we can see the Daleks do not welcome the Time Lord's presence. 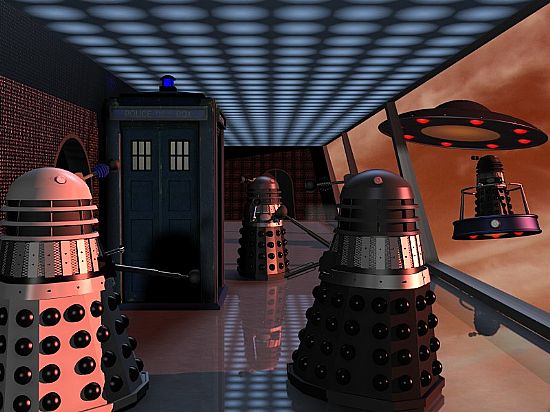 The War Room contains information about every Dalek unit throughout the Galaxy. The elite Dalek "A. E." Flight (named after the Earth mathematician Albert Einstein, who believed it would not be possible to travel faster than the speed of light) has actually gone beyond this barrier and exceeded light-speed by the power of 3, therefore learning the secret of crashing through the light barrier. Also found in the War Room is the Secret Council Chamber. It is instant death for any Dalek other than the war commanders to enter here. Located here is a battery of viewing scanner screens, upon which the Dalek Commanders can watch their Dalek Battle Squadrons in action.

Next to the secret chamber is what is known as the "Suicide Room" where 2 Daleks are elected yearly to stand guard. Here they wait in an immobile state doing absolutely nothing; but should they receive orders in the event of an invasion, they will both combine their force to pull a lever and destroy the entire city in a huge nuclear blast, eradicating its secrets in one vast atomic flash.

Daleks maintain a constant watch on the heavens for alien intruders. Here is a typical Dalek Observatory on Skaro. 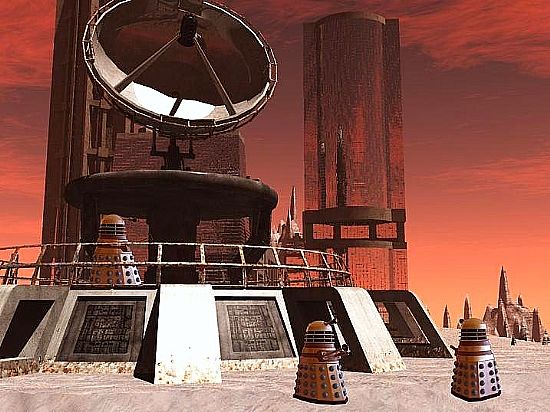 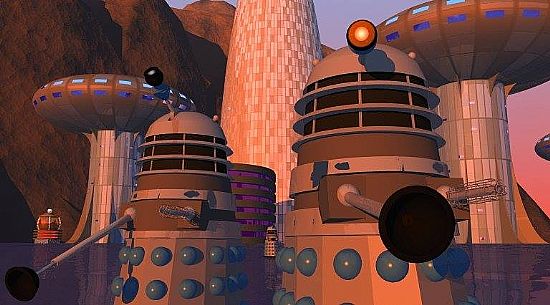 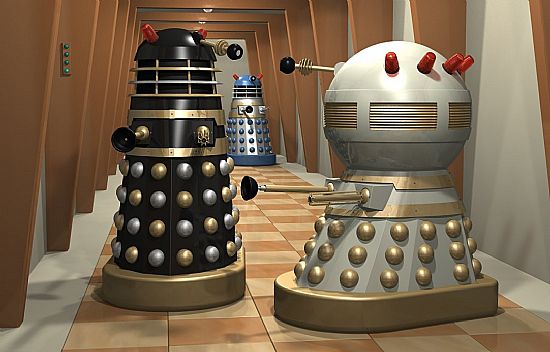 Very often, the Dalek Emperor and Dalek Supreme will convene a Council of War. Only the most senior Dalek Commanders attend this, and here we see a group of command Daleks ready to hold such a war meeting, and plan how best to use their battle groups in an attack on any enemy!

The Invention Hall is the intellectual centre of the city, for here Dalek inventors constantly strive to re-invent and perfect Dalek war machines, weaponry and technological advancement. Dalek inventors are given top priority over other sections when it comes to getting supplies of raw materials for their projects.

Here we can see the Emperor Dalek being consulted about an impending invasion, as the Daleks are always locating other planets to attack and enslave. They plan these military operations very carefully and precisely down to the last detail. Only then do the Daleks go on the offensive and invade other worlds. (My thanks go to Robin Day for the use of this image).

The Dalek War Museum is home to a fascinating collection of ancient weapons, armour and war relics. Daleks use this place as an educational training centre for their inventors. The most highly prized Dalek exhibit is the remains of the first space ship to exceed the speed of light. Adjoining the museum is the Emperor's Quarters. This is an area of the city that no Dalek would dare to enter uninvited, except perhaps the Dalek Supreme; and only then in an emergency. Here the lights are dimmed, and the walls and floor give off an eerie golden glow. No Daleks scurry around here, and the doors do not require infra-red rays to guard them, as the Emperor is the most protected of all Daleks, as well as being perhaps the most feared.

The Revitalizing Chambers are a place that all Daleks have to go to at regular periods, as it is in these chambers that the living octopus-like creature is taken out of its outer casing and given a dose of radio active rays. This nuclear bombardment is used to strengthen and extend the lifespan of a Dalek, as it throbs and pulsates under the revitalizing rays.

A tubular, transparent bridge connects the main building to the Dalek Dome of Culture and Science. In the Hall of Fame can be found information on notable Daleks from their past history, as well as present achievements. There are also sections dedicated to other cultures, such as Earth history. In fact, the Daleks claim that most of Earth's scientific discoveries were originally Dalek inventions and theories.

Below the Dome of Culture can be found the main Dalek living quarters, workshops and Special Equipment Hall. In this hall, Daleks can be given all manner of special weapons and disguises. A Dalek can be housed in a special Asteroid covering which enables it to travel around the Galaxy completely undetected, as it has the outward appearance of an asteroid floating through outer space. Food stores supplied within the "asteroid" casing allows a Dalek to survive for 100 Earth years before needing to return to Skaro or some other Dalek base for fresh supplies and orders.

At the very base of Dalek City, in the deep, dark depths; are located the interrogation and prisoner cell areas. Each interrogation room contains the infamous Dalek Mind Probe and Lie Detector. This device extracts any and all information from a prisoner that the Daleks may require; but quite often as a result of gaining this information, the prisoners mind is frazzled, leaving them little better than a cabbage. Of course, this does not worry the Daleks one iota, as they have no feelings of guilt or remorse for their actions towards any other beings; as Daleks consider all other life forms to be inferior to them anyway! 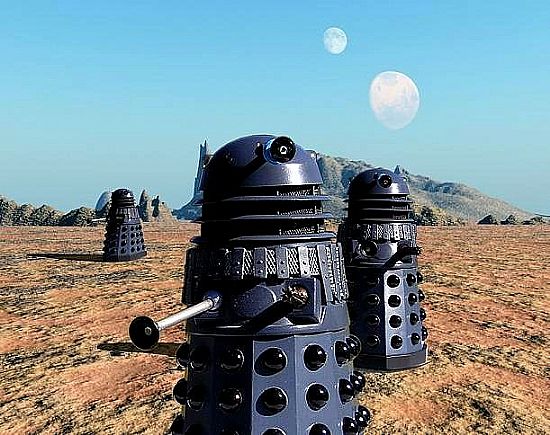 Daleks are well known for sending out squads to seek out new planets and life forms in other galaxies, but they still have a few unexplored zones on Skaro where patrols need to search for either valuable minerals or forms of life which might prove hostile to them.

Here we see just one such patrol checking out the surface of planet Skaro for whatever they might find.

When not actually levitating or flying in a spaceship, to save energy the Daleks have small craft called Hoverbouts, which are a kind of very small flying saucer platform which can be used to travel short distances from the surface of a planet; but are mainly used on Skaro. 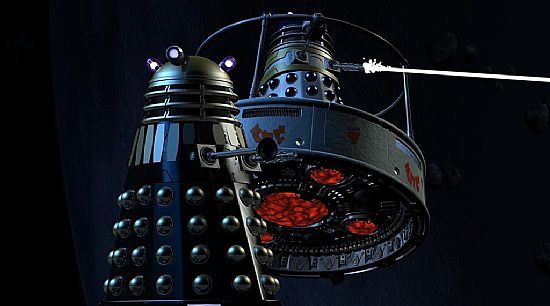 Hoverbouts can go into space, but are only used to patrol around a planet as we see here. 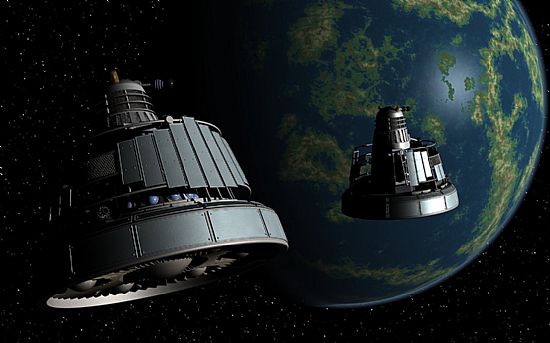 Stairs are no obstacle.

There once was a time when a staircase would cause any Dalek a major headache, and be a problem to them; but since the Daleks invented the capability to hover and elevate their machines above the ground on an anti-gravity forcefield, stairs and other obstacles have proved to be no longer a concern to them.

Here we can see 2 Daleks floating easily above a flight of stairs as they move over them effortlessly! 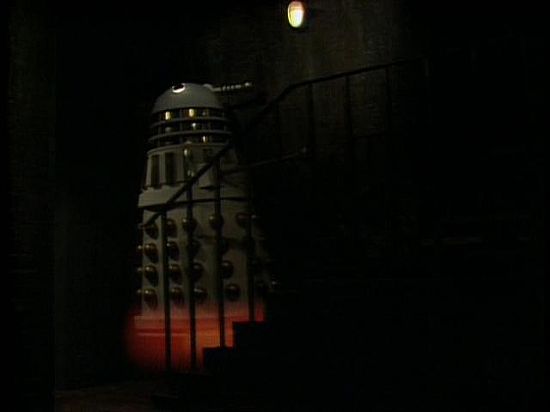 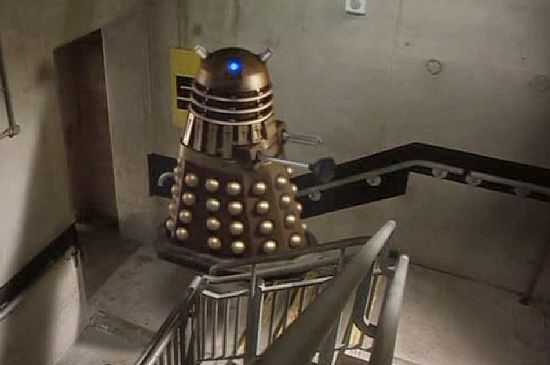 Daleks being able to fly without the use of hoverbouts is a useful attribute, and they are now no longer confined to moving around on flat surfaces, as they can levitate into the air with ease.

Anyone who knows the Daleks well will know that they too are Time Travellers just like the Doctor, which in a way makes them Time Lords. Here is a group of Daleks preparing to use a Time Machine in order to travel into the past or future in their quest for domination of the entire universe. 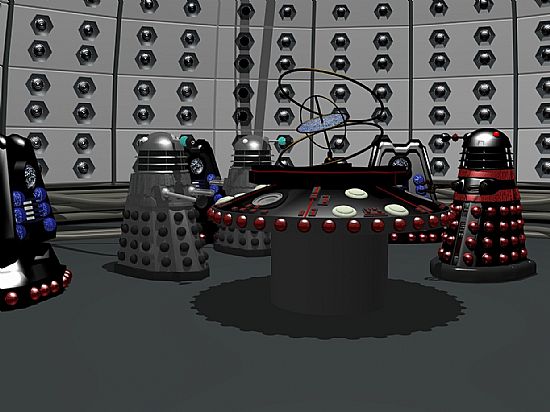 The Daleks think nothing of sending out large forces or armies to invade other planets. They enslave and conquer all beings who oppose them, exterminating any who stand in their way. Here we can see part of an invasion force which was sent to conquer Earth. 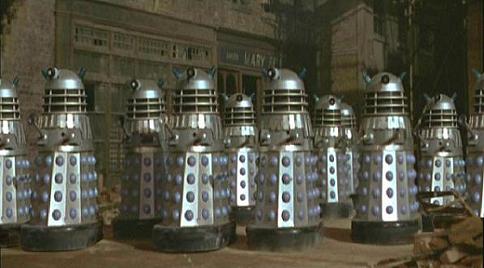