Strictly speaking, the creature that is "a Dalek" does not have any gender, as they are neither male or female. They are not even hermaphrodites, although it may be that early Daleks did have some kind of reproductive system and may even have given birth to live young, just as humans do; as Daleks were created from human like beings.

The laboratories where Daleks are made use cells from other Daleks to clone the creature. This means that one Dalek can produce countless thousands copies of itself during its lifetime; and as a Dalek is reputed to live to be a million years old (although this has never actually been confirmed), it does mean that if only 1 Dalek survives, then it is quite capable of beginning an entirely new Dalek race by itself.

Destroying one of the birth centres will only hinder the Dalek race, NOT eradicate them. For as long as just a single Dalek escapes, it will find a way to reproduce more within a very short time. Dalek offspring, or hatchlings as they are better known, are very vulnerable during their incubation period while undergoing their development; but once placed into the familiar Dalek War Machine Outer Casing, then they quickly mature to become the menacing scourge of the Universe that all other beings fear and dread.

What is a Dalek?

So, now comes the question everyone wants to know. What is a Dalek?

Well you have seen the real Dalek mutant creature at the top of this page, so what most of us see as a Dalek is really the machine which transports the creatures around. The beings themselves are 100% pure killing blobs of hatred for all other life forms. The machine itself is no more than a battle tank containing a war computer and a support system to keep the Dalek being alive. It may appear that the machine has only one weapon, but the entire thing is designed to be used as a living bomb if necessary.

Here you can see some of the functions a Dalek machine is capable of doing. 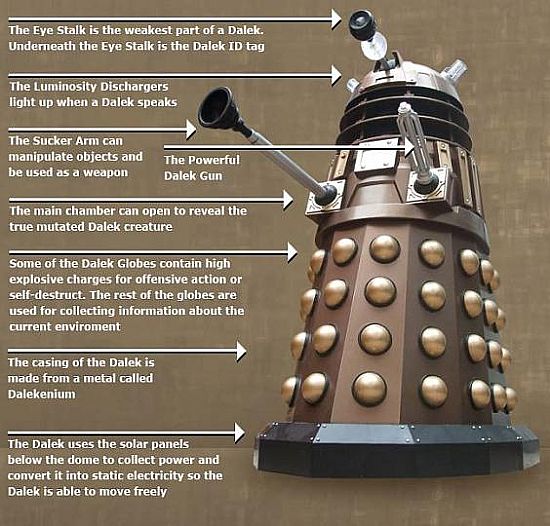