To be honest, the Daleks have never cared for, or really needed proper allies. Most beings who have been allied to them were either enslaved and therefore forced into helping, like the Ogrons for example, whom the Daleks considered to be intellectually inferior and only suitable for menial tasks, or to be sent ahead as shock troops to soften up the enemy prior to the main Dalek attack; or other races such as we humans, whom the Daleks could use mind control on.

Such an example were the Robomen who were human captives that had been "Robotised" and who obeyed the Daleks every command without question or hesitation. Another term used for Robomen is "Humanoid", as a human that has been mentally processed into a living robot like being is virtually a "Human Android."

Here in the Dalek Command Room we can see how the Emperor gives orders to his war council leaders, as they receive their instructions. 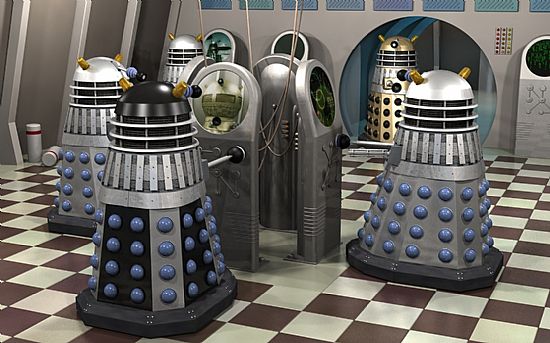 Seen as inferior beings, and kind of humanoid being is considered as low life, as here we see some humans being captured by Daleks. 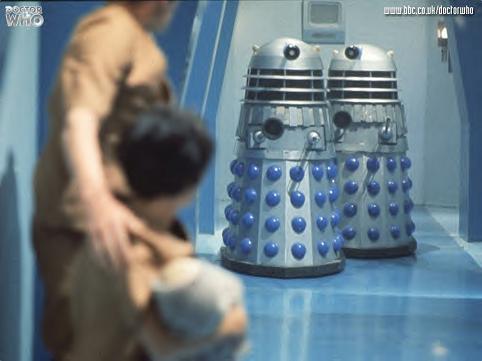 As most people know, the Dalek home world is the planet Skaro. Daleks are very security minded when it comes to protecting their home planet, and regular patrols are sent out into the surrounding space to observe for any invasions from hostile forces.

The planet itself was reputed to have been destroyed by the 7th incarnation of the Doctor, using a device called "The Hand of Omega"; but this has never been fully authenticated and proven. Besides which, the Daleks still exist and found ways to survive in void space, which is the empty space where no life exists between alternate or parallel universes.

Here you can see a Hoverbout Patrol guarding Skaro from any attack. The system of planets surrounding the Dalek Home World form a lovely part of the Galaxy, as this picture clearly shows. 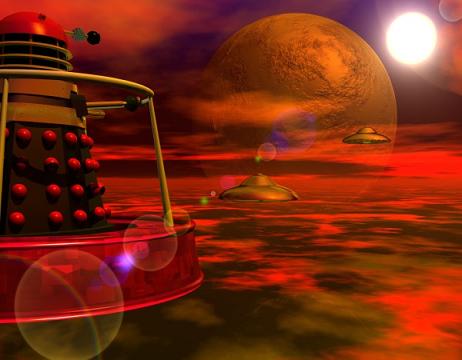 Davros - Creator of the Daleks 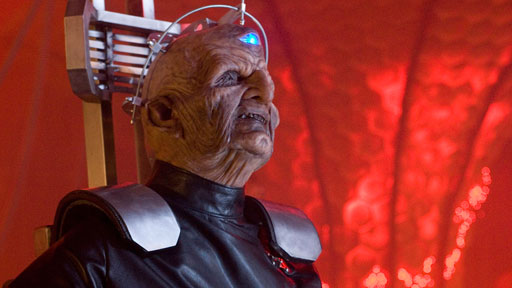 The Kaled scientist who created the Dalek race from mutated cells grown in a laboratory incubator, while not really considered an ally of the Daleks, is still a key figure in their plans. Indeed the new race of Dalek creatures we saw recently on the Stolen Earth/Journey's End episodes were made from cells cloned from his body.

So he has become necessary to the Daleks despite what they might think of him, but he also needs them just as much in order to continue his plans for domination on a vast scale.

A race of robots who have been enemies of the Daleks for a long time, and have gone to war with them are the Mechanoids or "Mecons" as the Daleks often refer to them as. They were first encountered in a Doctor Who story called "The Chase".

Here we can see a group of Mechanoids, no doubt planning an attack on the Dalek homeworld of Skaro. 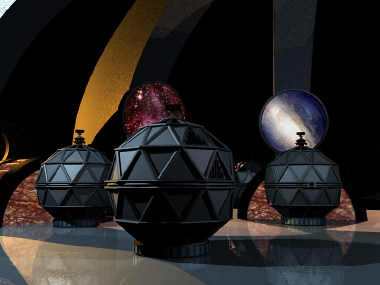 The Daleks consider all inferior life forms, which in their case is about 97% of all living creatures throughout the entire universe, to be their enemies. The more humanoid and less mutated the beings are, then the more unfit to live and surplus to requirements that species is. The Daleks deem themselves racially superior to all other living creatures, and therefore the most suitable beings for total domination of the Galaxy. To be a Dalek is to believe that you have reached a state of complete perfection and your mental processes cannot be surpassed by any other intelligence. Daleks consider that they cannot be improved upon mentally for brain power, only that they can improve their weaponry, battle tactics, war machines and Time and Space Travel technology.

Of course we humans rank as one of the major enemies of the Daleks; but without a doubt, their worst enemy of all is the Gallifrean Time Lord known as "The Doctor", or Doctor Who as we know him better as! The Doctor has appeared in many different guises, or "Incarnations" as his regenerations into a new body are called, which makes him very old and somewhat immortal; thus giving the Daleks a huge problem, as he will keep popping up to defeat their plans and causing them a major headache!

In the pictures below, we see five of the Doctors incarnations (the first 5 to be exact); and also two Daleks moving to capture and enslave some humans which may well end up as humanoids.

Of course the arch enemy of the Daleks is Doctor Who, who they consider to be their worst nightmare and nemesis. If the TARDIS is found on any Dalek colony, or on Skaro, Dalek scouts are quick to report back to central command of their find as we can see below. 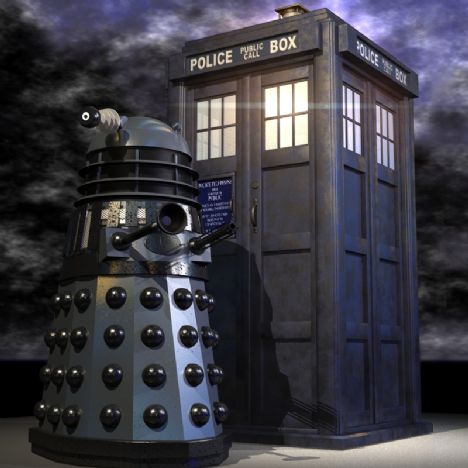 Sometimes the Daleks do break into opposing factions, and then civil war can occur. Rebel Dalek forces are usually dealt with quickly and mercilessly, although Daleks are capable of destroying their fellow creatures and a war between 2 Dalek forces is an utterly devastating affair, with large numbers of casualties on both sides.

Here we see an Imperial Dalek soldier which has just been blown apart by an enemy rebel Dalek.