Cled Griffin the producer of the first British Home Electronic Organ Festival (later to be known as Keyboard Music Festivals) is very proud of the fact that he engaged Jean Martyn in her first year in showbusiness in the 1980's.

Jean rose to fame in 2011 in the TV show, Britain's Got Talent where she was one of the ten finalists. 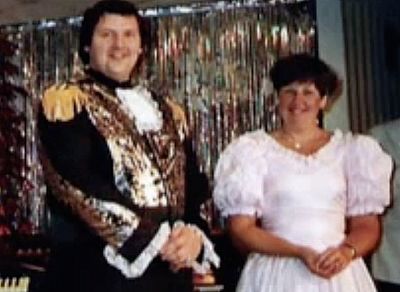 Shown right is Jean taking part in the fancy dress ball at Pontin's Barton Hall, Torquay, along with Tim Flint.

Jean's 30th year in show business coincided with Cled's 30th year of Keyboard Music Festivals.  It was at Sand Bay in 2010 that she told the audience of her forthcoming television appearance.

Jean appeared in Britain's Got Talent a year later.

Below is Jean's appearances on TV: