Keyboard Music Festivals (originally called Home Electronic Organ Festivals) were introduced to Britain in 1980 by Cled Griffin.   The weekend events were held at Pontin's Barton Hall until 2002 when the site was taken over by a German Bank for activity holidays for youngsters, under the banner of 3D Education and Adventure.

The first Keyboard Music Festival at the Lyme Bay Holiday Village, Seaton, Devon, took place in 2003.  The site, with a guest capacity of 450, was owned by Martyn Leisure Holidays who bought it from Warners Holidays in the 1990's

The keyboard music events were so popular that in 2004 they took place twice a year, February and October - outside the normal holiday season.

The superior accomodation was provided by brick built bungalows on the vast grounds of the holiday site.   The restaurant served a variety of meals, which included a salad and ommette bar.   Under the same roof was all the usual amenities, including bars, a cafe for coffee and, of course, a concert hall with a fantastic lighting and sound system.

The keyboard Music Festivals continued at Lyme Bay until 2008 whe the site was bought by Tesco Supermarkets.

In 2009 and 2010 Cled Griffin's late season keyboard festivals were held at Sand Bay, Weston-super-Mare, which was also owned at that time by Martyn Leisure Holidays.   The production in 2010 saw 30 years of Keyboard Music events Festivals by the man who introduced them to the UK.

On this website we feature just a few of the players put on YouTube by Dennis Willcocks.   They feature some of the artistes who made the event at Seaton a Lyme Bay Experience.

And a word from the Producer:

First of all I wish to thank the players and all concerned for making the festivals at the Lyme Bay Holiday Village, Seaton, such a big success

Andy Oakley, the former Entertainments Manager at Pontin's Barton Hall, was engaged as compare and added laughter to the event.

The new venue became so popular that there was often a waiting list for vacancies, and it was then decided to hold the Keyboard Music Festivals twice a year, February and October. 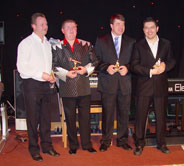 In 2005 the British Keyboard Awards took place (right), which were organised by ORGANFAX and based on nationwide votes from keyboard enthusiasts.

Four players who played at the Lyme Bay Experience went on to appear on Britain's Got Talent.  We show clips of their television performances for added interest - see menu.

Visits to the fishing village of Beer, just two miles away, for shows on the first ever Wurlitzer organ brought to the UK., raised over £1,000 for the Methodist church where it was a valued cherished instrument.

It came as a shock and big blow to the keyboard scene when the news broke in 2008 that Tesco had bought the site to build a supermarket.   Despite objections by local residents, who had use of the fitness centre and swimming pool, planning permission was granted.   It was the end of some great Keyboard Music Festivals at a first class venue that had retained the standards set by Warners.

Finally a word of thanks to Dennis Willcocks for producing on Youtube the videos he made, which are listed in the menu.