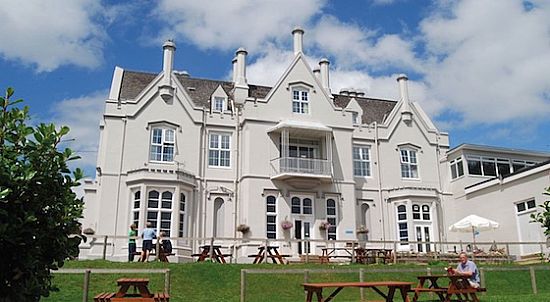 The first event took place in December 1980 after Cled Griffin (right) had contacted Trevor Hemmings who was Pontin's Managing Director at that time, later to become one of the richest men in the UK by selling off some of 26 holiday sites for housing development. Now, in 2016, 0nly 6 sites remain under the management of the Britannia Holiday Hotel Group.

In 1980 Barton Hall was the flagship of the Pontin's fleet with waiters dressed in evening suits serving a choice meals to your table.

During the heydays of the festivals at Barton Hall there were some wonderful shows, forums and teach-in sessions, including 1994, the year the lottery started and the channel turned opened.  That year a Euro version was produced, whch starred Franz Lambert, who had a standing ovation as he walked into the dining hall for breakfast the following morning - something never seen before.

In the late 1990's, Andy Oakley, the Entertainments Manager, added humour to the event with late night sessions with Ian Griffin in the Squires Retreat, a pub in the grounds of the site.  Later Andy became the compare for the concerts held in the Harlequin Ballroom.

Standards declined when in 2000 a German bank bought the site under the banner of PGL 3D Adventure & Education Holidays for youngsters.  The Keyboard Music Festivals continued until 2002 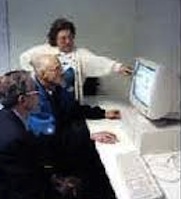 with advantage being taken of the air conditioned computer complex to introduce keyboard enthusiasts to the Internet, including ORGANFAX, a website devised by the late Margaret Falkner (right).  Other noticable changes were the restaurant, which had been changed to self-service and also the concert hall, which had been converted to a gymnasium.

American Organ Adventures in the 1970's

Going back in time and before Cled Griffin introduced Electronic Festivals to Britain, he says that what was happening in the USA in the mid 1970's caught his eye. Events called ORGAN ADVENTURES were taking place in different states when enthusiasts would travel to see productions put on by organ dealers with workshops included.

Again in the mid 1970's, when Cled Griffin was the secretary of the Swansea Electronic Society, Molly Forbes was organising Organ Lovers Weeks at St.Ann's Hotel in Buxton.   The events were simply concerts with a solitary Hammond organ on stage.   The principle guest players were: George Blackmore, Bryan Rodwell and of course Molly herself - all theatre organ players.