Continuing to research life in Fortrose and Rosemarkie in the Census year of 1911 but unable to access local newspapers of the period due to the Covid lockdown I spent an afternoon trawling through the on-line archives of the national newspapers.

Although neither Fortrose nor Rosemarkie featured in the national dailies that year the news demonstrated striking parallels in general with our own situation with regard to social and economic change, climate and mortality. The papers then, as now, depended on headlining royalty, politics and the weather and, given the time, there was plenty to report. Edward VIII had died the previous year and George V was due to be crowned in June, 1911 and with a promising start to the summer, a warm sunny May, the forthcoming coronation created a brief national air of optimism.

Britain, however, remained a rigid class-based society and the long-established status quo was being challenged by Irish Nationalists, Suffragettes and an increasingly forceful labour movement.

And then, of course, there was the weather. After a promising start, with the exception of violent thunderstorms and heavy rain in the earliest days of June the weather remained warm, dry and sunny through June and into September. As high pressure built over Germany warm, dry air fed across from the continent bringing a heat wave in August. Temperatures in England reached 35oC over much of the south and highs of 36.7oC were recorded in Northampton, Canterbury and Epsom. The prolonged warm, dry period resulted, of course, in a drought which was particularly severe as it coincided with the highest temperatures. Central and Southern England had less than 20% of average rainfall.

Taken across the UK records show that the summer of 1911 had been the warmest since 1846 and that the temperature records set that year stood for a further 80 years.

The impact of the heat wave was reported on at length in the press. The Times even began to publish a regular column entitled Deaths from Heat. In London during the three months July to September there were 17,400 deaths, an ‘excess’ of 4,100 compared to the same three months in 1910. Most of the deaths were of infant children and over 2,000 were due to diarrhoea associated with food and milk that had ‘gone off’ without the benefits of refrigeration.

In Manchester and Bradford water supplies were cut off for several hours each day to conserve the dwindling supplies in the cities’ upland reservoirs. Reservoirs in the Peak District also recorded low levels and threatened the integrity of the canal system that was still a vital part of the British transport network.

In the countryside the weather triggered an early harvest although the gathering of crops was disrupted by the overbearing heat. In England and Eastern Scotland good grazing became scarce and the papers noted that farmers were struggling to water and feed their stock, causing the price of milk to rise and there were shortages of cheese and butter.

There had already been a growing dissatisfaction generally, particularly in the large industrial towns of northern England and the Central Belt of Scotland, with low wages and poor working conditions and the hot weather exacerbated the situation as daily life became more difficult. Factories and mills closed due to water shortages and hours were altered to avoid the afternoon heat. Strikes and riots involving over a million trade union members erupted across the country and finally a dockworkers’ strike left large quantities of perishable foodstuffs to rot in warehouses causing the threat of food shortages.

During the latter part of the nineteenth century there had been a progressive systemisation of meteorology and the collection of quantifiable and comparable data, led in Scotland by the Scottish Meteorological Society which collected monthly weather reports from volunteer observers. Copies of these reports were passed to the Meteorological Office in London and collated into extensive weekly and monthly summaries of observations and charts that covered the whole of the UK, laying the foundation for an increasingly sophisticated weather forecasting model.

One such volunteer observer was Archibald Thom, the science and mathematics teacher at Fortrose Academy, who submitted a monthly record to the Scottish Meteorological Society. His records are now part of the extensive digital archive held by the Meteorological Office and can be accessed on-line.

Thom’s monthly observations for 1911 show that, although Fortrose did not suffer the extreme weather conditions experienced in the south, there were some significant departures from the averages of temperature and rainfall over the year. Temperatures peaked in summer, after a fairly mild winter, falling to a low in the autumn. Winter rainfall was low and the summer and early autumn were much drier than usual but the water table was restored by exceptionally heavy rain in November.

Average mean temperatures in January and February were a degree or so above the norm with with ‘highs’ of 11.1oC and 13.6oC and ‘lows’ of -3.3oC and -2.5oC. Average mean temperatures from March through to August were close to the normal range with ‘highs’ in June and July of 26.1oC with ‘lows’ in the same months of 5oC and 6.1oC. Temperatures in Fortrose in August, the peak of the heat-wave in the south, reached 24.4oC with a night- time lowest of 7.8oC. The autumn was cooler than average but December’s mean was near normal with a ‘high’ of 12.8oC and a low of -0.6oC. 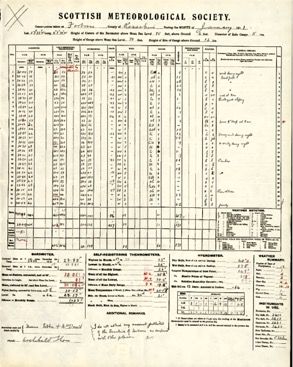 Without access to local newspaper reports and personal diaries it is difficult to gauge the effect of the summer on the inhabitants of Fortrose and Rosemarkie. In England and Central Scotland the fine weather did have some positive effects, there was a large increase in the numbers of people visiting the seaside and sea-bathing became particularly fashionable. One can imagine that although the southern coast of the Black Isle would not attract the crowds that were to be seen elsewhere the proprietors of guest houses, holiday cottages and apartments in Fortrose and Rosemarkie would have been fully booked, welcoming families from the South of Scotland and England.

Life in the UK 1911 was very different from that of today. Society was less complex, expectations were lower and people were more self-sufficient and therefore one might imagine that the impact of the heat-wave would have been less than it would be today. There was no rush by the Government, as there was in 1976, to appoint a Minster of Drought, in order to mitigate the effects of the weather.

There are frequent references to the summer of 1911 being the ‘perfect summer’ and searching for images on the net there are many ‘snaps’ of ordinary families at the seaside and in the countryside (as well as those of the elite and bourgeoisie) taken using the new Kodak ‘Brownie’ and ‘Pocket’ cameras thus reinforcing what would have otherwise been a simple folk memory of an exceptionally warm summer in the hedonistic and innocent years that immediately preceded the First World War.

Once ‘lock-down’ is over there should be an opportunity to follow-up on the detail of the year using the local newspapers in the archives and libraries and, perhaps, FRLHG members may find examples of diaries and ‘snaps’ that will provide first-hand evidence of ‘The Perfect Summer of 1911”.

Archibald Thom was a highly respected teacher and member of staff at Fortrose Academy responsible for the teaching of maths and science for over 40 years. During this time Archibald set up a weather station which, with the aid of his Higher-Grade pupils, submitted regular monthly reports to the Meteorological Office.

Archibald Thom was born in 1881 in Cupar, Fife. The 1881 Census records him living with his parents, Andrew (a teacher of English) and Agnes, at Auburn Cottage, together with his brothers Andrew, John and James and his widowed maternal grandmother, Agnes.

In the Census of 1891 Archibald now had a younger brother, David, and all five brothers were recorded as being scholars. Grandmother Agnes was still living with them as was an older sister, Agnes Jane, who was a pupil teacher at the local Board School. By the time of the Census of 1901 Archibald is an ‘Arts Student’ and had moved to Edinburgh and was lodging with the Rutherford sisters in George Square.

In September 1907 Archibald took up an appointment as a teacher at Fortrose Academy, renting a house (Hollyside) in Castle Street and then on December 28th he married Lizzie Robertson from Keith at the Imperial Hotel in Aberdeen.

The Valuation Rolls for 1908/09 show the couple living first at Hollyside, then as tenants at Ashcroft, a house and garden in Castle Street. The Census of 1911 listed Archibald, Lizzie and daughter Elizabeth still living at Ashcroft and Archibald is shown as a ‘Teacher of Science and Mathematics’ employed by the School Board.  The family continue to live at Ashcroft through the War years 1914-1919 when Archibald assumed the role of Senior Male Master covering for the absence of Kenneth Macleod, the Rector, who was serving with the Seaforth Highlanders.

The Valuation Rolls (and Slater’s Directories in 1921 and 1928) show the family as still at Ashcroft, then they moved to Bishop’s Cottage in the High Street in 1930.

Archibald continued to teach at the Academy and played an active role in the local community as the Captain of the Fortrose Golf Club from 1939-41. In 1940 the family moved to back to Castle Street into Moray Park. In the August of that year daughter Elizabeth married Donald Munro, an auctioneer from Easter Blairford, Avoch. 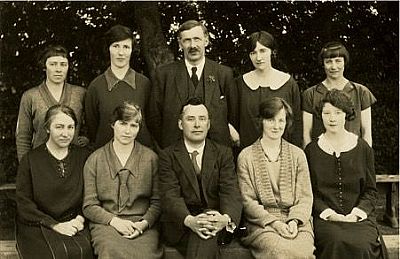 Archibald Thom retired from the Academy in 1941 but returned to teach woodwork one day a week and as a ‘supply teacher’ as and when the occasion demanded. After captaining the Golf Club again, in 1946, Archibald died in 1947 and was buried in the Fortrose Burial Ground where he was joined by Lizzie on her death in 1966.