A Century of Shopping 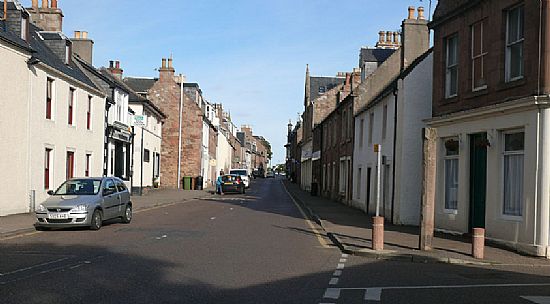 This was one of several ‘tippling houses’. Mr Storm owned the Tavern for many years and he and his family lived next door in Tavern House. 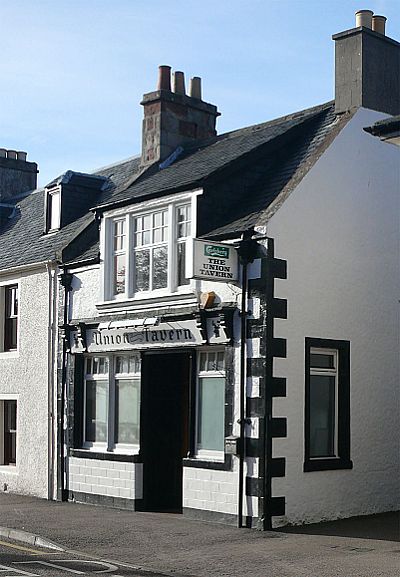 He described himself as a ‘grocer, provisions merchant, baker and confectioner. In the 1930s Murd sold butter, sugar, black and white puddings. He was a bit of a joker too. One time when he suspected someone of pinching the occasional black pudding, he tied them all together so that the next time this person tried to slip one into her pocket, a trail of black puddings followed her out of the shop.

For most of their life these premises have been used as a bakery, bakers shop and tea rooms. Slater’s Directory shows James Fraser as baker with Alexander Anderson, foreman baker living above the shop (1901 Census).

A series of adverts published in the 1930s declares ‘Fortrose and Rosemarkie for Good Weather and Lovely Surroundings’ The advert recommends a visit to ‘Alexander’s The Bakery, Fortrose’ for ‘Good Food – Best Bread, Cakes and Confections.’ There were tea rooms and van delivery, telephone Fortrose 16. Harold Alexander was replaced by Ure, Bakers and Tea Room until after the Second World War when in 1946, Mr and Mrs Alexander (no relation to Harold) took over.

Mr Alexander started work in the bakery at 2-00am so that Hannah Alexander had bread ready to sell when the shop opened at 9-00am. The baker specialised in small rough loaves, milk loaves and bread rolls. Wine biscuits, a speciality of the Moray coast and similar to modern butter biscuits, were very popular. Mr Alexander also enjoyed decorating any wedding cakes requested. 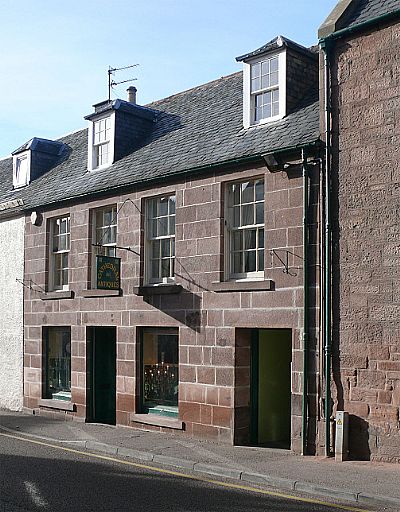 This has always been a pharmacy/chemist/druggist.  At the beginning of the 20th century the druggist was James Robertson. By the 1930s the proprietor of the ‘Black Isle Pharmacy’ was James Gow. His son Angus Gow joined him later to not only dispense medicines but also to sell toilet requisites, sick room accessories, pipes, tobacco, cigars and cigarettes. The Pharmacy also acted as a Kodak Agency to develop and print photographs. There was a ‘dole’ office outside, at the back, where young men went to register for the army. 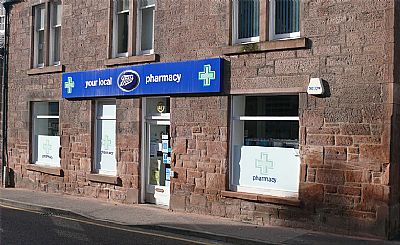 The sheaf of wheat plaque on the front wall of this shop tells us it started out as a Bakery. In 1911 John Macleod was the baker. In the 1930s John Macdonald renamed it ‘The West End Dairy’ and it sold ‘pure sweet milk from tested cows’ as well as cream, butter, fresh eggs and poultry. Tom Macdonald had a dairy farm under the railway bridge at the top of Bishop’s Road and he delivered milk from a van or you could take your own pail to the farm to be filled. After the war Dorothy Kate Macdonald’s father, Kenny, had it as a bakery again. More recently it was Ina Anderson’s Hairdressers (1970s), a private residence and then briefly the ‘Farm Shop’ and now since 2010, ‘Cromarty Bakery’. 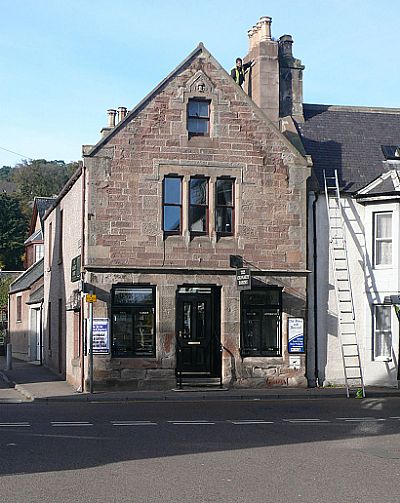 There were several shoemaker or boot makers in Fortrose at the beginning of the 20th century.  Slater’s Directory 1911 and the Census for 1901 list John Ross, Donald Ross, Andrew Paton, Thomas Ross, Alexander Fraser, Alexander McIver, George Davidson and Donald McDonald as shoemakers. Hannah Alexander remembers Charles McAndrew and George Munro as shoemakers in the 1930s, both men had lost a leg and took up shoemaking in rehabilitation.

In the 1930s Fortrose was a popular holiday destination so there were several cafes and tearooms. Margaret Rennie’s Restaurant served breakfasts, luncheons and teas at ‘moderate’ prices. Indeed Mrs Rennie is listed as running ‘refreshment rooms’ at 38 High Street  as early as 1911. Mrs Rennie also sold sweets and Hannah Alexander remembers the ‘pandrops’ as a sort of acid drop to clear the breath. Mrs Rennie lived above what is now Gow the Baker. After the Second World War the Charlie Pagliari took over the restaurant and renamed it 'The Merrythought Café’. Charlie's nephew and wife, Mario and Carla, continued to run the cafe, selling delicious Italian ice cream and sweeties from big jars. Following their retirement the cafe became a fish and chip shop.

There has long been a ‘hotel’ or ‘public house’ here but it has been known by various names. In the Slater’s Directory of 1911 Walter Grant is named as host at the ‘Royal Station Hotel’ but sometimes called ‘The Station’ or ‘The Royal’ as well as ‘The Royal Station’. In more recent times it has been known as ‘The Anderson after its American owner, Jim Anderson. The Anderson is known for the range of whiskies served there. 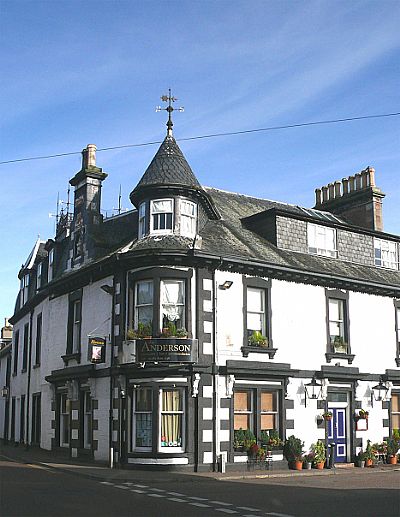 Now a jewellery and tourist type gift shop this used to be an important key shop. It is an imposing building with the Institute above. In the 1960's the Co-operative Store sold most everything, there was a drapery department too. Members of the Co-op had a number and it was something you had to remember. When you made a purchase, the assistant wrote your number on a slip of paper for you to keep. This was proof of entitlement to dividend, a payout from the Co-op based on how much you had spent. This was the first self-service shop in Fortrose and you went to the till to pay. Prices seemed to be more stable in those days.

This has always been a Grocer/Draper shop. At the beginning of the 20th century it was William Geddies then mid century taken over by E.R, Anderson. Andersons sold the ‘finest Belfast hams’, ‘Ayrshire Roll’ bacon and ‘Wiltshire’ bacon. It also sold drapery and hardware and acted as an agency for Pullar’s of Perth.

Dorothy Kate MacDonald who married Ted Hayter, from Newfoundland, sold books, toys, gifts, stationery, newspapers and sweets. Willie Turnbull, known as ‘Willie Toot’ delivered papers for them. This was later owned by Mr. and Mrs. Graham and then Martin and Fiona Hooper and is now Highland Podiatry Services. 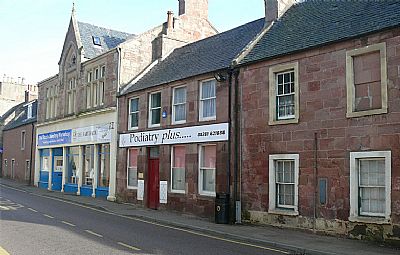 Today a popular eating place for both visitors and residents, formerly the ‘Tea Cosy and Chanonry Restaurant’ the restaurant is the site of Ona Matheson’s Drapers shop. Ona Matheson had a draper's shop on the corner of Academy Street and High Street in the 1960s and 70s. Draper is now thought of as an old fashioned name. Her shop was crammed full with men's, ladies, children's and baby clothes, knitting and sewing accessories and gifts. The Academy pupils went there to get kitted out in their school uniforms.

'The Store', as it was referred to locally, was owned by the Mackay family from the mid 50's until circa 1980. In addition to hardware and household goods in the shop, one could buy paraffin and agricultural supplies. Prior to the Mackays, The Store was owned by J & T Henderson. Shopping in the first half of the 20th century was very different to today. Everything had to be weighed out on purchase so flour was sold by the boll, similarly oatmeal. A boll was about 140 pounds. Customers would make their own jams, picking fruit in season and buying 1cwt of sugar. Henderson’s advertised themselves as Coal and General Merchants, House agents etc as well as selling ‘ironmongery, sporting ammunition, motor requisites and garage’. They also sold ‘millenium flour, the finest oatmeal, sugars, dog cakes, poultry foods etc etc’.