Edwardian Rosemarkie developed over the centuries along what is known as the ‘High Street’. The oldest buildings other than the church, date back to the 18th century and can be recognised by their gable end position onto the street. The remainder date back to the 19th century and show evidence of change in their roofing materials and windows.Take a walk around Rosemarkie and find out about its local history. A visit to the church and graveyard are well worth while as well as an essential look around the Pictish treasures in the Groam House Museum. 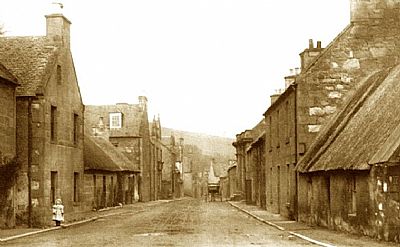 The buildings highlighted on the map are a small sample of what is to be found of the Edwardian decade, 1901 to 1910. 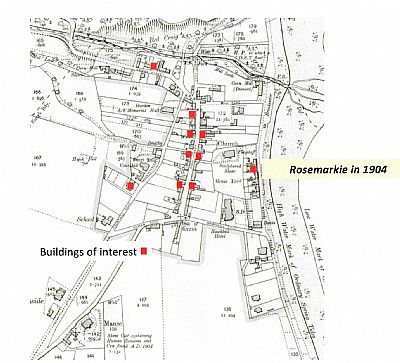 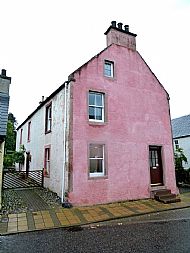 Lilac House is a late 18th century gable end house of 5 rooms. The steps at the front gave access to the shop with a workshop and stables behind.

It was built from rubble courses then harled. It has a slate roof now but was previously thatched as shown by the thackstanes at the edge of the roof.

Lilac House was home to William Home (1854),wife Christina Sinclair (1854) and daughters Jane, Nellie, Georgina and Margaret. sons John,  William and David. William was the son of William Home (1817) blacksmith. He and his brother were both apprenticed blacksmiths and Michael Home (1851) had a smithy down on the Shore. William (1854) reskilled as a carpenter, joiner and undertaker. His son David was also a joiner. William owner a further two houses on the High Street, the tenants were Donald Munro, saw miller and Duncan Douglas, shepherd. 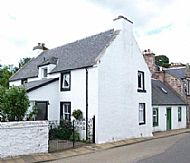 We believe Lilac Cottage was Kemp’s Inn at the beginning of the Edwardian period. The building dates back to the 18th century like the other gable end on houses on High Street. It was built of rubble coursed stone then harled and would have had a thatched roof.

The ground floor of Lilac Cottage was Kemp’s Inn from 1867 until 1904. The publican was Gregory Kemp who was born in Culbokie in 1822. He married first, Christina Sutherland then in 1873 Margaret MacCulloch. His sons Kenneth, Gregory  and John emigrated to Canada. Sadly John drowned aged only 27 years old. His daughter Elizabeth (1863-1907) acted as his housekeeper.

At the end of the Edwardian period the  owner was Isabella Fraser (1831) the widow of retired farmer John Fraser who had been the oldest man in Rosemarkie at 80+ when he and Isabella moved into Lilac Cottage in 1907 along with her sister, Miss Catherine Henderson.

The owner occupier was Charles Junor (1848) a cattle dealer, his wife Eliza and son Charles, an engine fitter. Charles Junor was one of several farmers owning not only land but also houses in Rosemarkie.

The Junor family owned 4 houses and a shop on either side of Church Lane as well as the house which is now number 28. 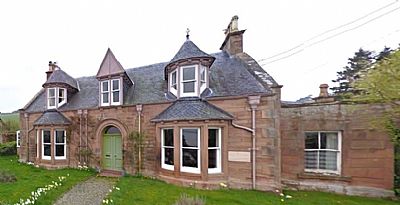 Crawmarkie, Courthill Road, was the home of Robert Gillanders. Robert was Town Chamberlain of Fortrose and from 1881, Inspector of the Poor following his father George Gillanders . Robert was born in Rosemarkie in 1847. He married Elizabeth (1855) about 1879. They had three children, son George (1879), William Watt (1881), who also became an Inspector of the Poor, and Sophia (1884, 1871)

The Gillander family were very influential in Edwardian Rosemarkie.

George Gillanders (1806) was born in Stornaway and came to Rosemarkie in the 1820s. Gillanders worked for John Carpenter Steavenson at his shop, now Doric House, in the High Street before going into business himself on the Shore in 1826 where he successfully undercut Steavenson who eventually went out of business.

George married Sophia MacKid of Fortrose and gave up most of his business interests to be Inspector of the Poor from 1845 – 1881. He was also Collector of the Rates for the relief of the poor and his initiative led to the building of the Black Isle Combination Poor House in 1859. His son Robert and grandson William Watt Gillanders both went on to become ‘Inspector of the Poor’.

George was also a merchant with shop in Rosemarkie and Fortrose. ship owner, agent for Militia Insurance Co, Secretary Black Isle Farmers 1836-41, 52-1873 and on the board of the North 0f Scotland Steam Packet Co 1849 . Bailile  Fortose council 1830 and Provost of Fortrose 1842- 45 . The Rev Simon Fraser, Fortrose Free Church protested about the scope of his influence but was not listened to and the Gillanders continued to dominate many aspects of life in Rosemarkie. 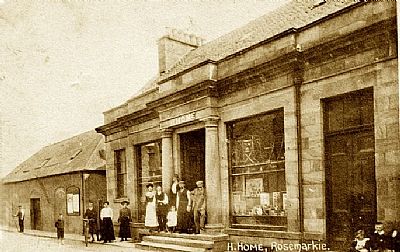 The house and shop were built by John Carpenter Steavenson. He had had many varied businesses but was primarily a provisions merchant mid 19th century. In the Edwardian period it was shop and home to Provost and merchant Hugh Home (1853), wife Catherine (1867) and daughter Anne (1889). Son Michael (1891-1938) ran the post office there. Michael was named for his uncle, grandfather, and great uncle, who were all blacksmiths and so closely related to William Home at Lilac House. 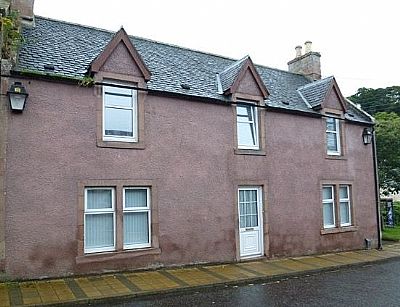 We believe the Headmistress was a Miss Elsie Fraser. She lived in the accommodation on the first floor.The school could take about 50 children and taught reading, writing and arithmetic.

Limetree House is a ‘B’ Listed property. It was built in the 18th century and like the other houses of that age, was built gable end onto the High Street. The building is made of coursed rubble stone then harled and it would have had a thatched roof.

In the Edwardian period we believe it was owned by the Gillanders family who came across from Stornaway in the 1820s. Eliza Gillanders, sister of George Gillanders, the Inspector of the Poor, lived here in 6 rooms which she let out to boarders and provided accommodations for holiday visitors. Rosemarkie was an increasingly popular destination for holiday makers in the early 20th century.

Early 19th century ‘B’ Listed shop and house. The owner and occupier was Annie Douglas McLean who described herself as a grocer, butcher, draper, stationer and milliner in the Trade Directories of the period.

The back house tenant was Christina Sinclair. 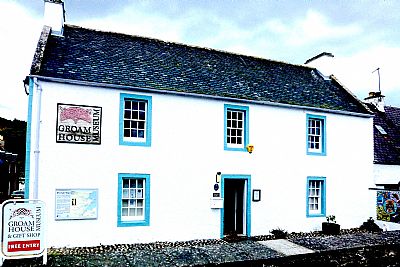 This building is now the Groam House Museum.

Holly Cottage is a ‘C ‘listed, early to mid 19th century cottage which has been altered through the years to suit its changing purpose.

The name ‘Holly Cottage’ came from the two ornamental holly bushes on either side of the front door/porch, which can be seen in early post cards. From family photographs, it seems the trees were cut down sometime in the World War 2 period. Across the road was the vegetable garden, and in the far corner was a well with good potable water. There were several good wells spread through the village. This plot has now been built on with a modern house.

Marine Cottage is a mid 19th century fishermans cottage. In Edwardian Rosemarkie we believe it was the home of the Hossack family. John Hossack was born about 1866. He was married to Margaret Reat and had three children, John (1897), Isabell (1899) and Rebecca (1901). Unlike many salmon fishers John did not come from a family of salmon fishers as his father John, was a mason, but he was able to make a successful living salmon fishing, holding leases for fishing stations on the Shore at Rosemarkie and at Chanonry from the Mackenzies of Flowerburn. He worked in a team with his neighbour Jonathon Munro.