In April 2019 Chris Rendell led our annual visit which was, that year, to the historic Royal Burgh of Dingwall and Dingwall Mart. This was a follow-up to two excellent talks, from Ewan McVicar on Hector MacDonald and secondly Terry Williams' account of droving featured in her book Walking with Cattle.

Dingwall, at the head of the Cromarty Firth has been an important centre from Viking times when the “thing’ was held on the mound, now the Cromartie Memorial marking the burial site of the Earl of Cromartie, Sir George Mackenzie.

The present church building is unusual in that it faces away from the town centre       and looks towards Tulloch Castle to the north. Close to the entrance to the churchyard is a Pictish symbol stone of the earliest, incised type, dating from the 4th-5th Centuries. 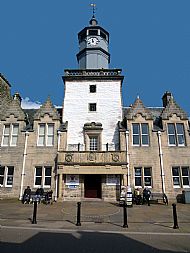 The tollbooth has a solid square tower that dates back to 1730. It is crowned by a tall graceful cupola added in 1774. The building has had many different uses. At one time the ground floor was a school and two shops later the prison. In 1903 Mr Andrew Carnegie donated money for the extension of the town house to incorporate a Library. 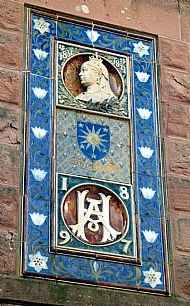 The tiled plaque on the side of the building is dated for 1897, commemorating the Golden Jubilee. It has a bust of Queen Victoria, the Burgh crest, the monogram of 'AH', the businessman who developed the site and a floral border.

The upper room was used for council meetings.

Once the Manse for St Clements

It replaced the Poorhouse which was relocated to the Burnside in 1888.

Now the Clydesdale Bank, Park House was built gable end to the street. Large windows flank each side.

Originally 'The Robertson's Hotel', it was renamed in 1911.

Outside is the first of the town's War Memorials.

Formerly the National Bank of Scotland 1835, later the Commercial Bank 1918. The building was designed by William Robertson. It became the North of Scotland Hydro Electric Board Headquarters then in 1999 the Theological College.

Designed by John Rhind in a French Gothic style. The building has long been admired for its beautiful interior, and particularly for its magnificent 16 foot high, stained glass 'rose window'.

In the church grounds stands a memorial to Rev John Kennedy an important figure in the Free Church and the Disruption Movement and its first minister in Dingwall.

The first station was built by the Inverness and Ross-shire Railway (I&RR) and opened on 11 June 1862 when the company's line was opened from Inverness to Dingwall.

The original Cambrai Cross has been repaired and replaced three or four times since it was taken from France and erected in Dingwall in 1925.

Designed by William Mackenzie is the former United Free Church.

St James the Great, Episcopal Church 1872
Designed by Alexander Ross in a simple and sturdy gothic design, to replicate that drawn up by a prominent English architect in 1852 but destroyed by fire.
Episcopalians have worshipped in the town since the Sixteenth Century, first at St. Clements and later in private houses until the first chapel was built in Castle Street in 1806.

This imposing Georgian building was originally thatched. At that time the Free Church was just across the road. 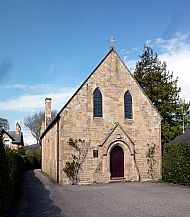 Designed by Wm C. Joass in the Gothic style, the interior is also very impressive with a Carrera marble altar and Aberdeen granite font. The modern stained glass windows to St Jude, St Lawrence and St Anthony were the work of Ninian Sloane, a Benedictine monk at Pluscarden

The River Peffery was diverted into a canal to ensure access to the harbour from the Cromarty Firth whatever the state of the tide. Cargoes of coal and lime came in while grain, timber and bark were exported.

By 1877 it had fallen into disrepair as mud and silt blocked the channel.

A large early 19th century house, this was formerly a hostel for pupils from Wester Ross attending Dingwall Academy,  it is now being renovated and converted into private apartments.

The Free Church was built after the Disruption in 1843 but disposed of when the congregation moved to the fine new building at the eastern end of the High Street. Later the Ross- shire Journal Printing Works who are now on the Industrial Estate. The old building was severely damaged by fire in 1990 and replaced with a new apartment block. 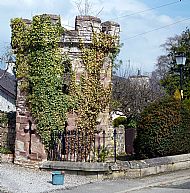 What was probably originally one of the corner towers of the old castle has been transformed into a dove-cot. 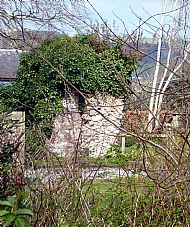 An earth and wood motte and bailey castle is said to have been built for William the Lion at the mouth of the River Peffery in the 12th century. The Earls of Ross held Dingwall Castle for the Crown. James IV visited in 1503 and the castle was improved and strengthened.

Following the death of James VI in 1625 Dingwall Castle seems to have been abandoned by the Crown, at a time when Tulloch Castle was in the ascendancy. During the Jacobite risings of the 18th century the MacKenzies held their councils of war here but by the late 18th century the castle was in ruins.

The stones of the castle were used by Captain MacLennan, to construct the present Castle House in 1820.