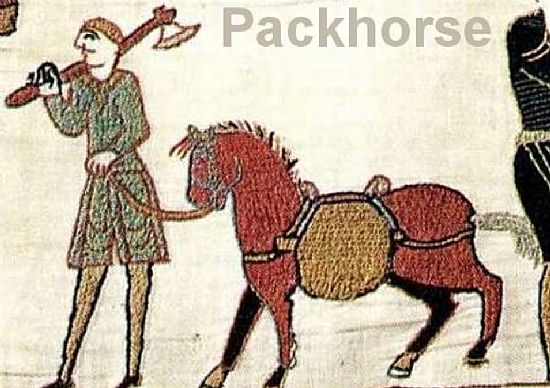 Packhorses - but why is so little known about them?

One thing that is certain from our research is that packhorses were essential to carry out trading across Wales. They carried everything possible. However there are hardly any records that explain how they were used or who managed the trails of packhorses streaming across Wales, carrying the good that were destined to markets in England, or simply moving the wool from farmhouse weaving looms to the local fulling mill / pandy.

However there are so many books, articles, stories and pictures about the drovers and their lives and routes, but not much about evidence about packhorses .....  except packhorse bridges, but even then the evidence is odd - several are called 'Roman Bridges", so have no sides remaining, some have been built over, but others left.

One of the Community Research Volunteers, Sue, found some intersting information about the weight of cloth that needed to be transported. - Sue found a website which explained the weight of various thicknesses of tartan - and "taking the heaviest (as a worst case scenario) and computing for a different width of cloth, I have calculated that it would only take about 21 horses to carry the 14,000 yards of cloth each week into Shrewsbury.  It sounds more feasible when put that way!"

Sue also found that in 'The Welsh Woollen Industry' by J. Geraint Jenkins (p217) provides information that indicated that one piece of Glyn web would weigh about 92lbs or 6 Stone, which make sense for a packhorse to be able to carry two webs packed securely on a secure frame.

From a PhD thesis ‘From Packhorse to Railway’ - Sue made the following notes:

1. Packhorse trains continued in mountainous areas on the Welsh borderland into the early 19th century.

2. Pickfords began their business with packhorses - PT: this is an interesting fact and the project team are in touch with Pickfords with an idea to recreate a packhorse train.

3. Shrewsbury acted as a centre for the transport networks that brough Welsh goods into England and these spread back into mid-Wales.

4. There were national carriers, middling carriers (market town to market town) and local carriers (rural settlement to market town). PT: We also found that farmers often used their own horses at times as pack horses, as well as for ploughing and other farm work

5. From the Middle Ages, Shropshire and the adjacent areas of Wales were important for wool and cloth producing - they were serviced by the River Severn with packhorses going to London, East coast ports and other river ports.

6. There was evidence from probate inventories which showed a number of packhorse carriers in the early and later 17th century.

8. Packhorses were always muzzled to prevent them from grazing while on the move.

Sue also found a book called “Seen on the Packhorse Tracks” by Titus Thornber.  We found that there are few books that refer to pack hosrses in Wales, but although it’s about Yorkshire but some of the comments are relevant to anywhere:

1. Horses required firm ground and to be able to ford streams that were still narrow, so routes sometimes meander around and take apparently illogical directions.

2. Every farm, hamlet, mine, mill etc would have had its packhorse track.

3. Turnpike trusts initially had very little impact on packhorse transport.  Horses require grazing at intervals along a route (not readily available on turnpikes) and the tolls would have ‘broken the bank’.  Also, turnpikes only connected major places not individual farms.

5. The lead horse would be an older experienced mare, and would wear a large bell on her collar - other horses might also have bells.

Sue's findings reflected information other CRVs found, recognising that pack horses transported all sorts of goods around the country.

Understanding the complexity of the network of pack horse routes is an area which would benefit from much more research and the Snowdonia National Park are interested to work with us in future, as they had little additional information to offer.

Sally Mitchell, from the Museum of The Horse, at Tuxford, Newark was able to tell us that:

Firstly of course they were not horses as we know them but generally around 13.2 - 14 hands. They were usually Galloways, a breed that is now extinct. These were a very hardy type of animal that were used widely as posting horses too. They were usually also gaited which means they had a quicker smoother pace in addition to the normal paces. I imagine this would have enabled the pack trains to move a little more speedily and presumably, with less body movement, less likely to suffer sores from the packs.

The trains are thought to have been in operation from very early times, some suggest the Vikings used them. Certainly they were used by the early carriers in areas where it was not possible for a wagon to travel.  I believe Pickfords originally used pack trains. Where roads were bad or non existent, they were the fastest form of travel.

The team would be led by a dominant mare that the rest would be content to follow. They are said to have had bells round their necks, presumably as much to warn an oncoming train, as to keep the laggards in touch with the body of the train.  They would have been controlled by one or two men either on foot or on horses. These trains could be as much as thirty horses long.

There are still in existence some very narrow pack horse bridges. Where they are just wide enough for one animal the walls are very low to allow for the packs. I would be interested to know if there are any such bridges in Wales. I am working on a study of the history of travel.

It is said that, certainly in the south of England, they had galloping pack trains to get the fish from the coast up to London as quickly as possible. That must have been quite a sight!

I am sure in early times they would have been widely used for wool and cloth.