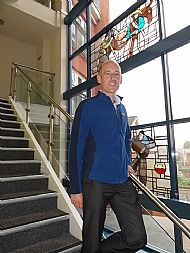 The stained glass windows that were in the Neath Windsor cinema are now featured within the block of flats that have been built in its place.   Unfortuately only those living in the flats have the joy of seeing them.   We think that treasures of the past should be enjoyed on a broad scale by future generations.

We went along to the flats in the company of Andrew Baker (right) of Coastal Housing to whom we are grateful for his interest and co-operation in allowing us to make a record of the Windsor's past treasures which have now been included in the new building. 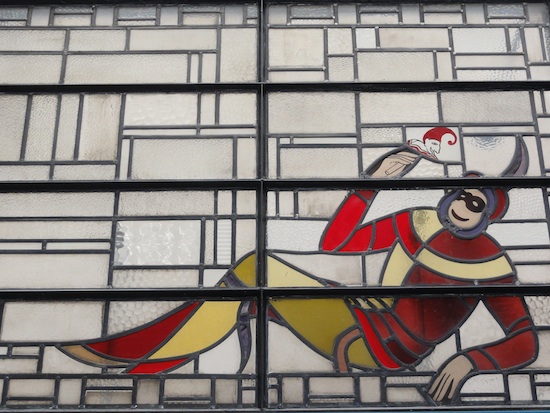 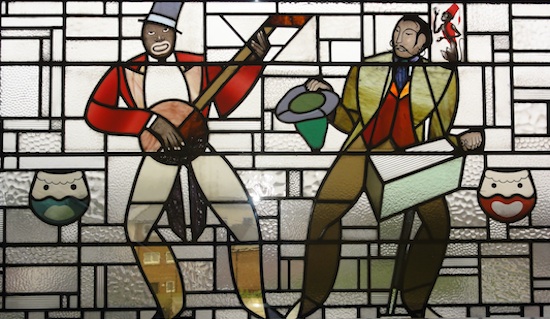 Many art experts say that the Windsor cinema refected the Art Deco era.  What is Art Deco you may ask?   Below we attempt to answer the question.

Art Deco is an eclectic artistic and design style that began in Paris in the 1920's and flourished internationally throughout the 1930s and into the World War II era. The style influenced all areas of design, including architecture and interior design, industrial design, fashion and jewelry, as well as the visual arts such as painting, graphic arts and film.

At its best, art deco represented elegance, glamour, functionality and modernity. Art deco's linear symmetry was a distinct departure from the flowing asymmetrical organic curves of its predecessor style art nouveau; it embraced influences from many different styles of the early twentieth century, including neoclassical, constructivism, cubism, modernism and futurism and drew inspiration from ancient Egyptian and Aztec forms. Although many design movements have political or philosophical beginnings or intentions, art deco was purely decorative and is perhaps reflected in the Windsor's stained glass windows, some of which we highlight on this page.