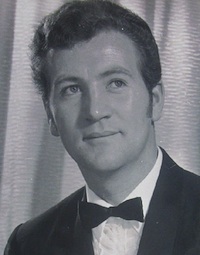 This website would not be complete if Allun Davies were not mentioned.

Born in Neath, Allun joined the Cadoxton Operatic society in his early teens and at the age  of 16 became the youngest member of the Welsh National Opera chorus.

In the 1960's he shot to fame on television's 'Opportunty Knocks' hosted by Hugie Green and was voted back seven times in succession by viewers of the programme.

Before retiring from the music scene, Allun enjoyed giving singing lessons to many who have since made a name for themselves in show business.