Recognised by the Queen in the New Year Honours List 2014 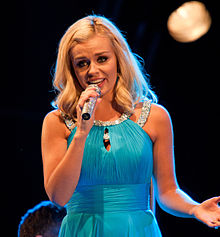 Katherine Jenkins was born in Neath, Wales in June 1980, where their parents Selwyn John and Susan raised her and her sister Laura.

Katherine attended Alderman Davies Church in Wales Primary School in Neath and later Dwr-y-Felin Comprehensive School, and received A grades in GCSEs and A Levels and participated in productions such as Calamity Jane and Guys and Dolls. She attended singing lessons with John Hugh Thomas and passed her Grade 8 examinations with distinction in both singing and piano.

Between 1990 and 1996, was a member of the Royal School of Church Music Cathedral Singers and passed the St Cecilia Award, the highest RSCM award for female choristers. She was also a member of the National Youth Choir of Wales for three years,] won the BBC Radio 2 Welsh Choirgirl of the Year contest (twice), and the BET Welsh Choirgirl of the Year competition. Katherine was also awarded the Pelenna Valley Male Voice Choir Scholarship for the most promising young singer. At the age of 17 she won a scholarship to study at the Royal Academy of Music, where she studied Italian, German, French and Russian, graduating with honours and receiving a music teacher's diploma.

After working as a freelance singing teacher, a tour guide on the London Eye and as a model, Katherine entered a modelling competition and became the Face of Wales 2000. She then decided to follow a musical career. Universal Classics and Jazz heard her demo and she was invited to an interview at which she sang Rossini's "Una voce poco fa". Universal offered Katherins a six-album deal, the most lucrative in the United Kingdom's classical recording history, reportedly worth £1 million.

More recently Katherine has appeared on a series of televison shows, including:
'Dancing with the Stars' and 'From Pop Star to Opera Star' when she was one of a panel of judges.