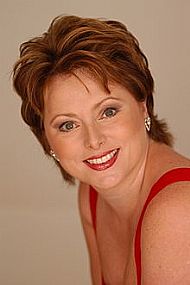 Born in the village of Pontrhydyfen near Neath, the same village as Hollywood actor Richard Burton.

Studied at the Guildhall School of Music and Drama, at the same time as Bryn Terfel.

Has since performed regularly at the Welsh National Opera; the Royal Opera House, Covent Garden and Bayerische Staatsoper, Munich. She has established a major operatic career in America where she has sung Susanna (The Marriage of Figaro) for the Santa Fe Opera; Adele (Die Fledermaus) for the Chicago Lyric Opera; Zerlina (Don Giovanni), Ann Trulove (The Rake's Progress) and Adina (L'elisir d'amore) for San Francisco Opera; and both Susanna and Zerlina for the Metropolitan Opera, New York.

As a concert singer, Rebecca has appeared at the BBC Proms and the Edinburgh Festival; at a Gala Concert to celebrate the opening of the Welsh Assembly in the presence of the Queen and the Prince of Wales; and in Bremen with Andrea Bocelli and the London Philharmonic Orchestra.

Her recordings include Ilia (Idomeneo), Pamina (The Magic Flute) and Susanna (The Marriage of Figaro) for Chandos, Nanetta (Falstaff) for Decca, and a solo recording of Italian songs for EMI. She has also recorded three principal soprano parts in Sir Charles Mackerras's Telarc series of Gilbert & Sullivan operettas: the Plaintiff in Trial by Jury, Mabel in The Pirates of Penzance and Josephine in H.M.S. Pinafore. She participated in only the second recording of Delius's Requiem (1996, under Richard Hickox). She has also sung Belinda in the BBC film of Dido and Aeneas and hosted the BBC television series A Touch of Classics with the BBC National Orchestra of Wales. She was also a guest artist on the 2008 BBC2 series Maestro [3] presented by Clive Anderson.

Rebecca is an Honorary Fellow of the Royal Welsh College of Music and Drama and was awarded an Honorary Degree, Doctor of Music, from the University of Glamorgan in 1997. She is also Vice-president of the Welsh homelessness charity Shelter Cymru.