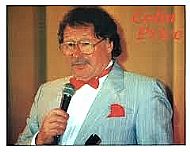 Colin is another Neath valley personality - one of the most sought after Cabaret Comedians and After Dinner Speakers around today.

His credits go back over 40 years with with highlights such as the ITV original series of 'The Comedians' which Colin performed on for 2 years. He went on to perform in the popular Granada Television production 'The Wheeltappers and Shunters Social Club'.

Colin has been voted Wales Comedian Of The Year on no less than 12 occasions!

Colin has been on over 100 Radio shows and done five Summer Seasons in Jersey. Four film appearances including the popular national release of Very Annie Mary. He is also a member of the prestigeous Lord Taverners.

Much of the last 10 years has been taken up with after dinner speaking, especially at sporting events. Colin has been alongside many of the big celebrities of our time including Dennis Taylor, Tommy Docherty, Bobby Charlton, Ian Botham, Gareth Edwards and many more.  Colin's popularity is due to the fact that he can vary his act to suit the audience and the occasion.