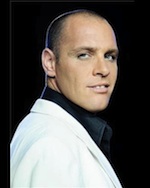 Adam Marks was born in Neath as Mark Adams in March 1971. He lived there with his family until his early twenties when he moved to the North East of England.   His change of name was the result of another celebrity having a similar name.

At 17 Adam started work as an apprentice joiner for British Rail and it was from here in 1990 that he had the opportunity to work as a volunteer with Raleigh International, working with community projects and medical teams throughout the tropical rain forests of Guyana.

Confidence boosted by his time in Guyana, Adam took the plunge and performed in his first charity concert in a local club. Supported by his family and friends Adam continued to perform and in 1992 was given a grant by The Prince's Trust, which enabled him to buy the necessary equipment to start touring the club circuit in South Wales and the North East of England. As a thank you to The Prince's Trust, Adam was privileged to perform in front of His Royal Highness Prince Charles. In his first year of performing on the circuit Adam was voted ´Male Vocalist of The Year in his native Wales, an accolade he achieved twice in the notorious North East. As well as working in the clubs Adam also travelled the world with some of the major cruise lines and worked as an extra on a number of well established TV series such as EastEnders and Casualty.

In 1998 Adam was selected for the Jane Macdonald BBC talent show ´Star for a Night´. One of the judges, Max Beesley - singer/actor, said that "Adam will be more successful and work longer than any of the other contestants on the show".