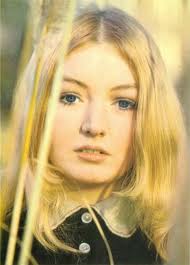 Mary Hopkin (born 3 May 1950), credited on some recordings as Mary Visconti, is a Welsh folk singer best known for her 1968 UK number one single "Those Were The Days". She was one of the first musicians to sign to The Beatles' Apple label.

Mary was born in Pontardawe, Wales into a Welsh-speaking family; her father worked as a housing officer. She took weekly singing lessons as a child and began her musical career as a folk singer with a local group called the Selby Set and Mary. She released an EP of Welsh-language songs for a local record label called Cambrian, based in her home town, before signing to The Beatles' Apple Records. The model Twiggy saw her winning the British ITV television talent show, Opportunity Knocks and recommended her to Paul McCartney. She became one of the first artists to record on the Beatles' Apple record label.

Her debut single, "Those Were the Days", produced by McCartney, was released in the UK on 30 August 1968 (catalogue number APPLE 2). Despite competition from a well-established star, Sandie Shaw, who released her version of the same song as a single that same year, Hopkin's version became a number one hit on the UK Singles Chart, and reached Number 2 in the US Billboard Hot 100. It sold over a million and a half copies in the United States alone, and was awarded a gold disc by the R.I.A.A.. Global sales topped the eight million mark.

On 2 October 1968 Hopkin appeared at St Paul's Cathedral, London, for the 'Pop Experience' where she sang "Morning Of My Life", "Turn Turn Turn" and "Plaisir D'amour".