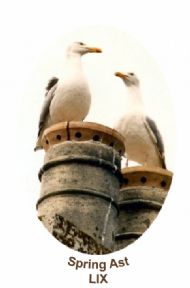 Spring Ast LIX (LIX for short) is a small, Orkney-based publishing concern founded in the 1990s. In 1998 an editorial board was established with Dr Richard Helmann as general editor. During 1998 a 100 ISBN allocation was obtained from the Standard Book Numbering Agency and, at about the same time, the Science and Technical Division was set up under John Vetterlein.

The aim has been to publish a range of work, mostly for circulation by private subscription (a great deal of our work is of a specialist nature with a limited clientele).

We are appreciative of financial and moral support from a number of people, all of whom wish to remain anonymous.

*Spring Ast LIX arose as a title quite spontaneously. In the early days of computing and facsimile electronic communication, one was limited to an eight-digit identification code. Since the idea of a publishing house was conceived on the island of Rousay, it was decided to combine the name of the property (Springfield), the primary publishing interest at the time (Astronomy) and a location factor—the latitude of 59 degrees north, in Roman Numerals.