But she was more than that.

Agnes Baden-Powell was a remarkable woman, who has perhaps been somewhat "air-brushed" out of history.  Although perhaps best known for being "The First Girl Guide", she was much more than that.  Like her siblings, she possessed creative, imaginative and eccentric talent. And used it. She practised crafts from needlework to metalwork; she had ability as a nurse, and was said to be a good cook and housekeeper. And also linguist and musician.

Agnes was born on the 16th of December, 1858, the thirteenth of fourteen children of her father, the Rev. Professor Baden Powell, then aged 62.  He and his first wife, Eliza Rivaz, dau of Vincent Francis Rivaz of Hackney, were married 17 July 1821 in St John's, Hackney; 14 years later she died childless on 13 March 1836 and was buried at St Peter's in the East, Oxford. He and his second wife, Charlotte Pope, dau of William Pope of Hillindene, Middx, were married 27 Sep 1837 in Speldhurst. Kent, but 7 years later she died 14 Oct 1844 and was buried at Speldhursthe; they had four children, who kept their POWELL surname.

Agnes's birth was registered in Kensigton the following quarter (Volume 1a, page 36); she was baptised Agnes Smyth Powell. Her father died on the 11th June, 1860, when Agnes was only 18 months old.  Her mother, as a tribute to Agnes's father, hyphenated his first name to the surname of herself and her children, the creation of the "Baden-Powell" family.  His children by his prvious marriage did not change their surname.

Although, as was usual then, Agnes never went to school, she grew up to become a very accomplished and educated woman.

She learned 11 languages, including Greek and Persian; she studied music, excelling in violin and becoming proficient in another seven instruments, including the organ and the piano. Her varied interests included natural history and astronomy - her mother's elder brother was Charles Piazzi Smyth, Astronomer Royal for Scotland. Agnes kept bees, birds and butterflies in her home. In 1900, The Royal Magazine published an article about 'The Baden-Powell bees', illustrating the bizarre beehives built by Agnes and her mother, including one in the shape of a bicycle.  Agnes was also an admired cook, and although the second youngest, as the only girl, latterly she was housekeeper to the family.

She was also an accomplished water-colour-ist; about 150 of her drawings are known.  Here is one, chosen at random. 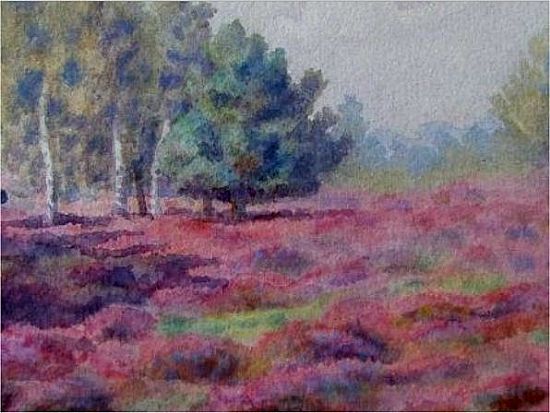 In an era when young ladies tended to concentrate on music and painting, she bicycled, she swam and she skated, and she stitched - and then went up in - hot air balloons with her younger brother Baden, and she also helped construct Baden’s aircraft and flew in some of his experimental flights.

In 1909 Agnes was a founding member of the short-lived Women’s Aerial League, formed under the auspices of the Aerial League of the British Empire. Its members incorporated the Young Aerial League branch with the aim of increasing ‘airmindedness’ in boys and girls. Courses in aircraft identification and observation took place at Hendon Aerodrome supported by Claude Grahame-White’s Flying School.  Boy Scouts and Girl Guides attended flying displays at Hendon. In 1938  Agnes was made an Honorary Companion of the Royal Aeronautical Society.

Following the end of the South African War, in which her brother Robert became famous, Agnes and her mother went out to South Africa, and in April 1901 Agnes became engaged to Sir William Bisset Berry, the Speaker of the South African Parliament, but they did not marry. Some years later she became very friendly with Guglielmo Marconi, but she never married.  It is quite likely that her mother impressed on her that, as her only daughter, it was her duty to care for her mother in her old age.   A forceful matriarch, her mother had also discouraged all her children from marriage - only three of her ten children had children of their own.

For some years Agnes was President of the Westminster Division of the Red Cross, and she also worked for the League of Mercy, and for Queen Mary's Needlework Guild.

But Agnes is best known for founding the Girl Guide Movement.

In 1910 the Girl Guide Association was created, with Agnes as President.  Her brother Robert had written "Scouting for Boys", and this she modified and adjusted to be suitable for girls, and this, the first Girl Guide handbook,was published in 1911 as "The Handbook for the Girl Guides or How Girls Can Help to Build Up the Empire".

Having outlived all her 13 siblings, Agnes died on the 2nd of June, 1945, aged 87, and lies buried in the family grave in Kensal Green Cemetery in London, though her name is not listed on the monument.

The Friends of Kensal Green Cemetery have a Newsletter, and their issue No. 67 of October 2012 carried this article about the family, and about Agnes.

The Federation du Scoutisme Europeen have also published their tribute to a remarkable woman, as has Arts UK;  and there is more here, and here.

In 2010, a biography of Agnes,  "The First Girl Guide" by Rev. Helen D. Gardner, was publiched by Amberley Books.  Unsurprisingly, the book concentrates on the title, so doesn't give much emphasis to her life and accomplishments before that.