ON my desk there is a shabby little blue book. It is shabby, because it has been travelling round with me for twenty nine years, and it hasn't always travelled in a first class compartment by itself. There were days when it went in a haversack of white cotton, with a lot of the sort of junk Guides do carry around with them — you know — billy cans, and string, and in those days sometimes a banana, which was squashable, or chocolate that melted on a hot march. I wouldn't part with that hook for a lot. It is the copy of " How Girls Can Help to Build the Empire." which my Patrol Leader first lent, and then gave me, before I was ever enrolled. I can remember so well the Saturday morning when she called at my house — it was a wet, windy September day, and I was being kept indoors with a cold. It was one of those mornings when nothing looked like happening. Then she walked in — a girl from a higher form in the same school, of whom I was rather shy. She talked about me joining Guides and I just felt embarrassed and unhappy. As if my mother would ever let me do that, however much I wanted to. I wasn't at all sure I did want to, either. I was glad when she went away. But she left the little blue book, and because I was bored and had nothing to do. I began to read it. Even then, it was a wee bit old-fashioned. Already the pictures in it looked funny. But — yes. BUT! By lunch time that day I had one certain, burning ambition — I knew I wanted to be a Guide more than anything else on earth. Why? Because the writer — sister of that, to me, shadowy figure, Sir Robert Baden-Powell, the Chief Scout, had managed to make the whole idea of what Guiding could be - alive, thrilling, and intensely important, in that book. It was a satisfactory book, because it told you so many different things — it didn't just preach a sermon, but went swooping off to explain how you put up a tent, lighted a fixe, made a toothbrush out of a stick, planned out a garden patch, signalled to ships at sea, or sent up signals of distress. It was dotted about with stories of great people and what they had done. Yes. It was a book that to me in those days, seemed to have the answer to most of the things I had always wanted to know about.
I wonder how many other Guides owe as much as I know I do to the old Chief's sister for writing that book? I wonder how much all of you owe to her, without ever knowing it, for the work she did in those early days of the Movement? Last time I saw her - a little, very upright old lady in a Guider's uniform, and that marvellous, broad-brimmed, wide-awake hat which she always stuck to, no matter how Guide fashions changed, it was a bitter winter day. We met in a bombed church, where a memorial service was to be held to someone we had both loved and honoured. Miss Baden-Powell, in the ten minutes we had to wait before the congregation began to arrive, made me utterly forget the gloom, the cold, the bleakness of the place and occasion. She recounted to me in those few minutes the whole thrilling history of that old London Church, including a most exciting story about how some of its treasures had been hidden away at the time of the Reformation, and never found since. "What fun if the Guides could track them!" she said, with that sparkle in her blue — so very blue — eyes, that made one forget completely that she was well over eighty years old.
Miss Baden-Powell, like the Chief himself, had the most tremendous, never-flagging interest in life and things and people. That, I think, was the secret of her book. She wrote of all the things in life that she found exciting, and because she was so interested in them, she made them interesting. All through her long life she kept that power of being interested, and it is something that stamps a Guide — probably the one outstanding quality that makes Guides all over the world recognise each other. There is no room for the bored and the biased in Guiding. People get bored because they stay inside themselves, like prisoners in a cell, and refuse to look out at all the queer, extraordinary, important happenings in the world around them. These may be anything, from a great new invention to a butterfly coming out of a cocoon. Of course, if you want to be of some use in the world as well, it helps — but the people who make the best Guides aren't the ones with a "mission" to save humanity. They are the ones, like "the First Girl Guide," as she liked to be called, who are just so interested, and observant, and keenly alive, that helping others comes naturally. Unless you are by nature unpleasant, it comes natural to want to help people if you are quick enough to see where help is needed. It is the being wide-awake that counts. It is as one of the most essentially wide-awake people in the world that you should remember the very gallant little old lady who has this week been called to Higher Service, after many years of gay, faithful, unspectacular service to Guiding in this country.

Printed by Gibbs & Bamforth, Ltd., St. Albans, and published by the Girl Guides Association. 17-19. Buckingham Palace Road. S.W.1.
All communications with regard to Advertisements should be addressed to
"THE GUIDE,"
Advertisement Department.
46-47, Chancery Lane,
London WC2.
Subscription rates, including postage,
3/3 for 3 months; 6/6 for 6 months; 9/- for 12 months.

The World Scout Bureau released this tribute on the passing of Agnes Baden-Powell at the time of her passing on 2 June 1945. The concentric circles on each side of the title represent the trail sign for "I Have Gone Home." This sign is on the headstone of the grave of her brother, Lord Robert Baden-Powell, in Nyeri. Kenya, who had did four years earlier. 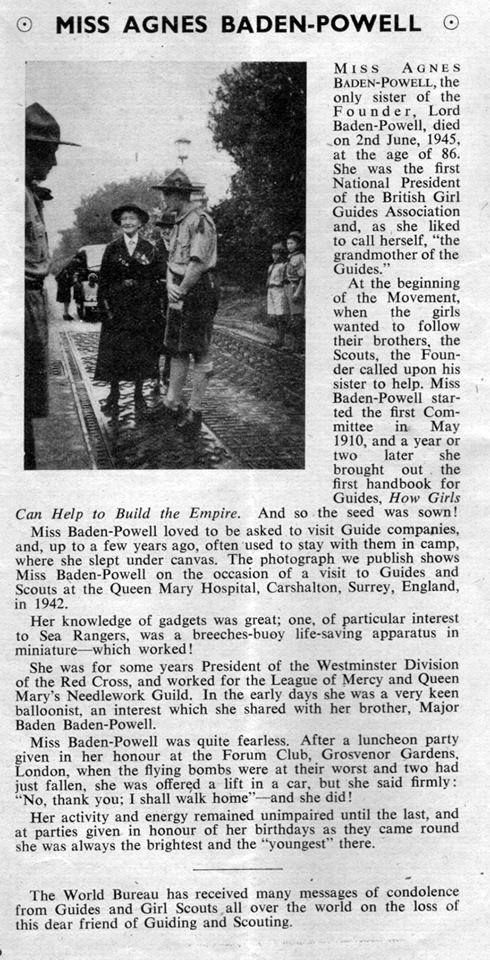 MISS AGNES BADEN-POWELL
Miss Agnes Baden-Powell , the only sister of the Founder. Lord Baden-Powell, died on 2nd June. 1945. at the age of 86. She was the first National President of the British Girl Guides Association and. as she liked to call herself, "the grandmother of the Guides." At the beginning of the Movement, when the girls wanted to follow their brothers, the Scouts, the Founder called upon his sister to help. Miss Baden-Powell started the first Committee in May 1910. and a year or two later she brought out the first handbook for Guides, How Girls Can Help to Build the Empire. And so the seed was sown! Miss Baden-Powell loved lo be asked to visit Guide companies, and. up to a few years ago. often used to stay with them in camp, where she slept under canvas. The photograph we publish shows Miss Baden-Powell on the occasion of a visit to Guides and Scouts at the Queen Marv Hospital, Carshalton. Surrey. England, in 1942. Her knowledge of gadgets was great; one of particular interest to Sea Rangers, was a breeches-buoy life-saving apparatus in miniature — which worked! She was for some years President of the Westminster Division of the Red Cross, and worked for the League of Mercy and Queen Mary's Needlework Guild. In (he early days she was a very keen balloonist, an interest which she shared with her brother. Major Baden Baden-Powell. Miss Baden-Powell was quite fearless. After a luncheon party, given in her honour at the Forum Club, Grosvenor Gardens. London, when the flying bombs were at their worst and two had just fallen, she was offered a lift in a car. but she said firmly: "No. thank you: I shall walk home" -and she did. Her activity and energy remained unimpaired until the last, and at parties given in honour of her birthdays as they came round she was always the brightest and the "youngest" there.

--oOo--
The World Bureau has received many messages of condolence from Guides and Girl Scouts all over the world on the loss of this dear friend of Guiding and Scouting.