A SUGGESTION FOR CHARACTER TRAINING 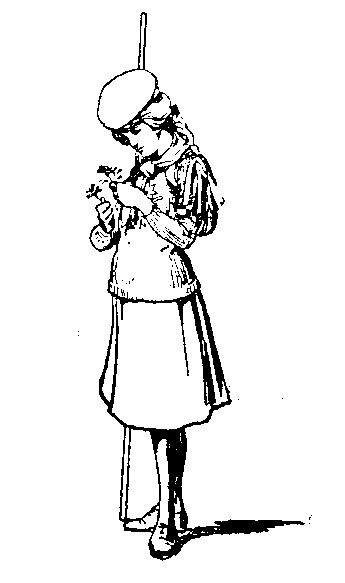 REASONS FOR THE INSTITUTION OF

Decadence is threatening the nation, both moral and physical the proofs are only too plentiful. It is preventable if taken in time. Much of this decadence is due to ignorance or supineness of mothers who have never been taught themselves.

Physical Defects exist to an enormous extent, a large proportion of which are preventable.

Moral education is left by the mothers pretty much to the schoolmaster. There is little character training in schools and practically none outside. The Japanese, on the birth of a child, put up out- side the house the sign of a fish or a doll to signify a boy or a girl—the boy being destined to swim against the stream and make his way in the world, the girl being a doll to be petted and made much of.

This is not up to present-day requirements in Great Britain. Girls must be partners and comrades rather than dolls. Their influence in after life on the actions and quality of the men is very great— they become their " guides." They therefore need character training quite as much as the boys. As

things are, one sees the streets crowded after business hours, and the watering-places crammed with girls over-dressed and idling, learning to live aimless, profitless lives ; and, in some cases, they run to the opposite extreme and take up manly pursuits, which make them hard and sexless ; whereas, if an attractive way were shown, their enthusiasm would at once lead them to take up useful woman's work with zeal.

Loafing, trusting to luck, want of thrift, unstable- ness are increasing defects among our men ; so they are among the women, though possibly not as yet to so great a degree. Good servants are hard to get; homes are badly kept ; children are badly brought up. There is great waste of their life among women of every class.

As one step, among others, to counteract these evils among the future men we have started " Scouting "—a scheme of games and badges which gives the boys something good in place of what is bad and in a form which really appeals to them. And it catches the worst—who, after all, are those gifted with the nearest approach to personal character —as well as the best, and turns them the right way.

As far as one can judge by the number of Scouts and the reports of parents, schoolmasters and others, the results promise success.

The following schedule is devised for girls on similar lines, but differing in aim and in detail to suit the sex:

Already some six thousand girls have registered themselves, without any encouragement, as "Boy Scouts," and are carrying out the same games and practiss so there is evidently a desire for it.

But the scheme now suggested is more adapted for training the girls in womanliness as well as in usefulness.

A Camp is a good "Hooligan Tamer" whether for boys or girls; and useful occupation, so long as it is presented to them in an attractive way, is willingly taken up by both.

This scheme might be started either independently or possibly as a cadet branch or feeder to the Terri- torial Organisation of Voluntary Aid. By its method every girl of whatever class might be instructed

(b) morally in Religion, Chivalry, Patriotism, Courage, and so on, by means which really appeal to her, and without necessarily making her a rough tomboy.

The unit for work or play is the "Patrol" of eight girls, of whom one is "Patrol Leader," another the "Corporal."

Three or more Patrols form a Company under a "Captain" and a "Lieutenant."

Jersey or bluse of Company Colour.

Belt with pouch for surgical appliances.

Cape hung on the back.

Shoulder-knot of the " Patrol" colour on left shoulder.

Gauntlets on the hands.

Badges much the same as for Boy Scouts.

THE AIM OF THE TRAINING.

The aims given to the Girl Guides are these :

I. To make themselves of practical use in case of invasion by being able to find the wounded after a battle ; to render first aid ; to transport them to hospital ; to improvise ambulances, hospitals, etc.; to make hospital clothes ; to cook ; to nurse, etc.

2. To prepare themselves for a Colonial life in case their destiny should lead them to such : including camp life, farming, gardening, housekeeping, cooking, and so on.

3. To make themselves generally more useful to others and to themselves by learning useful occupations and handiwork, and yet retaining their womanliness.

Badge.—Motto " Be Prepared" on left arm.

As soon as a girl can pass tests in the knowledge of the Rules of the Corps ; can lay and light a fire ; make a bed ; cut out and sew a Union Jack ; and tie knots, she becomes a 2nd Class Guide.

To become a 1st Class Guide a girl must have 1/- in savings bank ; cook a simple dish ; know simple First Aid bandaging ; know simple hospital nursing; know the history of the place, and able to act as guide to visitors, and know whereabouts of ambu- lance, police, fire, telephone stations, etc.

To be worn on the right arm after passing tests.

I. FIRST AID. As laid down for boys in " Scouting for Boys." How to deal with accidents.

2. STALKING. i.e., Observation, tracking, and nature study as for boys.

5. CYCLIST. As for Boy Scouts.

8. MUSICIAN. Same as for Boy Scouts, with alternative piano or singing.

9. FARMERS—Dairy or poultry or bees.

10. GYMNAST.—Ability to instruct others in physical exercises and their theory.

II. ELECTRICIAN. AS for Boy Scouts.

12. TAILOR. Cutting out and sewing clothes by hand or machine. Guides should, as a rule, make their own skirts and knickers, and hospital clothing for patients.

14. FLORIST.—As for Boy Scouts, plus flower growing and making up bouquets, etc.

15. ARTIST.—Draw ; oils or water colours from nature, or model in clay or carve in wood or repousse metal.

19. INTERPRETER.—AS for Boy Scouts—knowledge of Esperanto or any modern foreign language.

A First-Class Guide can obtain the following extra badges :—

As for Boy Scouts—bronze and silver.

For good deeds as for Boy Scouts.

NAMES OF PATROLS AND THEIR CRESTS.

Sections will bear the name of favourite flower.

Crest of the same flower conventionalised to be worked or sewn on to left breast of jersey.

Colour of the flower for shoulder knot.

The White Roses . . White and green.

White shoulder-knots are worn by the officers.

The religious training would be similar to that for Boy Scouts—that is, in the hands of the
Captain as regards the form, or where members of different religions are in the
same company it will be entirely unsectarian, i.e.

1. Spiritual.—Knowledge of God through Nature Study.

2. Practical.—Duty to others, by daily good turns; Chivalry and Charity, etc.

And other items of training would be generally those given above as the subjects for which Badges of Efficiency can be awarded.

The daily "good turn" which a "Guide " would have to perform in accordance with the rule for Boy Scouts can take the form of helping their parents or neighbours in household work or sick rooms.

"A Handbook for Girl Guides," by Miss Baden-Powell, is in course of preparation, but in the mean-time the training can be carried out on the same principles (i.e., by means of games and competitions)

as given in the handbook " Scouting for Boys " (Second Edition), 1/-, details being altered to suit above aims. See also " Scouting Games," 1/-.

HOW TO START THE TRAINING.

In applying this training the following points have to be borne in mind :—

To be their guides women must not only understand the men and their tastes, so as to be their comrades, but they must also maintain a refining influence and command their respect and their admiration.

Then, among women, class distinction is more pronounced than among men. There is a bit of a gulf between the delicate lady of the castle and the fighting slattern of the slums. Whereas men, of whatever class, are much more equalized and brought together in their sports, in work, and in war ; they neither attain the angelic height nor the degraded depth that women do.

For these reasons the training laid down for Boy Scouts, though it applies pretty generally to all boys, whether from Eton or from East Ham, does not apply equally well to all girls even when altered in details to suit the sex.

With girls it has to be administered with greater

discrimination---vou do not want to make tomboys of refined girls, yet you want to attract and thus to raise the slum girl from the gutter. Its main object is to give them all the ability to be better mothers and guides to the next generation.

Therefore, to carry the training into best effect, it essential that good supervision should, as a first point, be arranged for.

With the boys, Scouting has, to a great extent. Been taken up by the boys themselves, and they have then got gentlernen to take command as their officer & and have formed local committees for their better administration.

But the reverse procedure would be the right one in the case of the girls ; and it is for this reason that I have so far refrained from encouraging girls to taking up Scouting. (In spite of this some 6,000 have already done so.)

Where it is desired to start " Girl Guides" it would be best for ladies interested to form a com- mittee, who would then get hold of the right kind of young ladies to act as captains, and apportion to these their recruiting district. The captains would  hen get together a few girls of special promise to train as patrol leaders; these would then collect their patrols of girls and teach them under the supervision of their captains

The initial organisation and training can best be carried out in the winter. A club-room will be

essential for this. A camp for efficients in the summer will be the great incentive to effort and the great opportunity for really getting hold of the girls.

The management and administration will be left entirely in the hands of local committees.

A field for the national utility of this training lies in the Organisation of Voluntary Aid of the County Association and Red Cross Society. the local branches of which might reasonably find in the Girl Guides an effective means for carrying their work into practice and for insuring its continuity. in such case the same managing staff could carry out the girls' organisation with very little extra trouble, and thus give the necessary local machinery ready made for its inception.

Any further information, badges, etc., can be obtained at the Headquarters office of the Girl Guides, which is for the present established at 116, VICTORIA STREET, LONDON, S.W.

See also PAMPHLET B, which gives the subjects of instruction.

N.B.—The title " Girl Guides " and the badges are being registered for protection against use or manufacture by unpaid persons.