Posted here with their kind permission,
but split & re-arranged.

The death in infancy of a brother and two sisters before she was born, and another brother soon after, left Agnes Powell as the only girl in a family of five boisterous boys; moreover, those deaths created a gap of seven years between the three eldest boys (all born within little more three years) and the three youngest children. Thus, Agnes (‘Azzie’ to her intimates) was particularly close to her brothers Robert (‘Stephe’), nearly two years older, and to Baden, not 18 months younger than her. When their father died, on 11 June 1860, the children were - 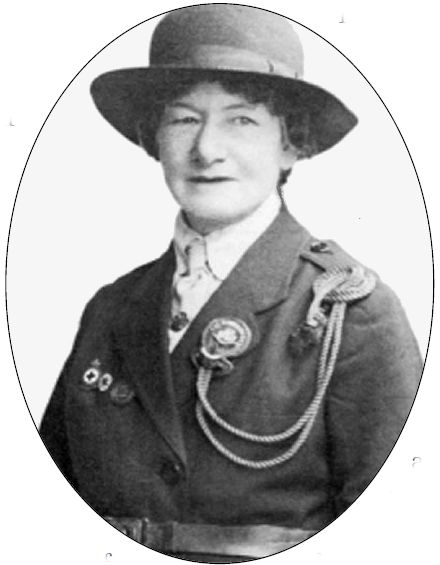 Like her brothers, Agnes enjoyed camping, fishing, shooting, sailing, swimming, cycling, tennis and golf. She was born a Victorian who lived to see the end of World War II; she liked to dance and learned to drive. Like her mother, she was artistic (skilled in crafts as various as metalworking and lace-making) and musical (playing the organ, piano and violin). Like so many of the Powells and the Smyths, she was interested in science, particularly natural history, aeronautics and astronomy, and was conversant with several languages. She kept birds, bees and butterflies in her London homes. A shared childhood interest in kites and balloons led to her brother Baden’s pioneering career in aeronautics, but Agnes was constrained by personality and circumstance not to seek higher education, and to stay with her mother as her brothers’ careers flourished.

Thus she followed developments in aviation, like many of her interests, as an informed observer. She only became an honorary companion of the Royal Aeronautical Society in 1938, while her brother (eventually Major Baden Fletcher Smyth Baden-Powell FS FRAS FRMetS) had been an influential President thirty years earlier.

Agnes’ talents came to the fore with the evolution of the Boy Scouts. In an age that valued segregation of the sexes, the initial idea of a co-educational scouting movement was regretfully abandoned, but the meteoric success of scouting for boys naturally attracted many girls who, like Agnes herself, enjoyed lively outdoor pursuits. The presence of many enthusiastic girls at the first national scouting rally at Crystal Palace in 1909 brought the matter to a head, and Robert Baden Powell turned to his sister to launch a complementary movement specifically for girls and young women.

The modest Agnes did not aspire to authority, but certainly understood both what scouting aimed to achieve, and the restrictions imposed on girls by well-meaning adults and peers. Brother and sister also appreciated the need to project the girls’ movement as preparation for lives of service and motherhood — not encouraging hoydens to compete with boys, but training resourceful young women to cope in any emergency, and perhaps even to venture as wives and workers into distant colonies and protectorates.

Within a year, some 6000 Girls Guides had joined the ranks, and the Boy Scouts’ manifesto was adapted as The Handbook for the Girl Guides; or, How Girls Can Help to Build Up the Empire (1912). Troops were to be named for flowers, not animals (the Brownies were originally the Rosebuds).

But there were also badges for skills such as telegraphy, and Guides mirrored the original scouts of Mafeking as confidential messengers on the home front during World War I.

Also in 1912, Robert met and married the young Olave St. Clair Soames (1889-1977), every bit as forceful in her way as his good mother. She threw herself into his great project, and Agnes was soon sidelined: after the Girl Guides were formally constituted in 1915, Olave became chief commissioner for the United Kingdom, then Chief Guide of the British Empire, and ultimately World Chief Guide.

Agnes was given the honorary post of President, but obliged to cede even that in 1917 in favour of George V’s daughter Princess Mary; in 1918, Robert’s handbook Girl Guiding replaced her manual. At the same time, the mildly eccentric and decidedly middle-aged Agnes was not the dynamic leader and networker that Olave proved to be, nor even a particularly gifted administrator.

She was an exemplar of the Girl Guides’ values and achievements, accomplished in an impressive range of the skills, crafts and activities to which Guides aspired, active and athletic even in her eighties. She worked steadily in the capacity of Vice- President until her death, travelling in uniform to visit her troops, and gamely camping under canvas with girls a fraction of her age.

Guides turned out in force at her funeral, yet her name was never added to the family monument that commemorates her grandparents, parents and siblings. She was under-valued, and nearly forgotten in the decades after her death, but that tide is turning. In 2010, Amberley Publishing produced her biography, The First Girl Guide: The Story of Agnes Baden- Powell by Helen Gardiner, and many Web sites now acknowledge her critical role in the formation of the Guides.

The Friends of Kensal Green Cemetery hope that this renewed interest in Agnes Baden-Powell might now lead to the honour she deserves on the Baden-Powell family grave, either on the monument or on a plaque beside it.