A contemporary observation of evictions in Knoydart

ln the Inverness Courier of the 15th instant an article appeared, entitled "Evictions in Knoydart." To correct or explain certain impressions which the public must receive from that article is the object of the following remarks.

The following are facts which l am ready to prove:

If the crofters in Knoydart did not of late years “improve their condition”, it ought to be asked what encouragement they received for carrying on improvements? None of the crofters had a lease, and who will carry on improvements under such circumstances? We do not know of any crofters in the Highlands that improved their condition during the last seven years, a period in which they were visited with an extraordinary famine.

Surely the crofters did not increase very much since the management of the property passed into Mrs Macdonell's hands, which was in the summer of 1852; and before she was a year in office, the first and only act of her generosity exercised last spring towards the poor people was to warn every one of them off her property.

“The question came at length to be whether Mrs Macdonell or the people on the property were to remain in possession."

Why was this question not started sooner? Why was it not proposed during the existence of the famine, when only a few paid the rent, when the majority paid very little of it, and some paid none at all; and not so late as this, after almost the whole of them had commenced to pay? 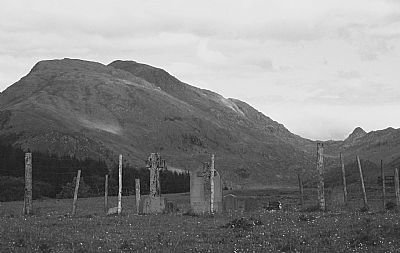 At Martinmas of 1852 many of the crofters paid the rent, and they all paid what they could. Glengarry was then living, but is now, alas, dead! This the true solution of the question.

"Some of the people were eager to go to Australia, while some proposed to join their kindred and friends in Canada.”

By perusing this passage, the reader would be led to conclude that the proposal for emigration had first proceeded from the people themselves, and that they all got their choice of going either to Australia or to Canada. This, however, was not the case. When the people wrote Mrs Macdonell of Glengarry, begging of her to allow them to remain, and promising to pay the rent for the future, as times were improved, they were told in answer that Sir John McNeill was to take them to Australia; that if they would emigrate without resistance, their arrears would be remitted, &c.; that if they did not go, she would at all events turn them off her property.

The people choosing the least of two evils, made up their reluctant minds to go to Australia. Very soon after, when Mrs Macdonell found, as I suppose that it would be more expensive to send the people to Australia than to send them to Canada, she wrote home saying that they must now go to Canada. The people had no choice.

Her offers were not gladly accepted but, as I have already stated, by a kind of necessity. Some of the crofters, after selling their stock, had £50 and £60 in cash. Two of them, to my own knowledge, had that sum, Sandy Macdonald, Dune, and John Macdonald, Ridarach. But those two were not in arrears, and applied repeatedly to Mr Grant, the factor, for permission to remain in possession of their crofts, but to no effect; and one of them wrote to Mrs Macdonell herself for the same purpose, but received no answer.

“Others had made money by subletting part of their holdings."

I have had ample opportunity of knowing it, and I do not know a single instance that can be adduced in support of this assertion.

We are informed, "that out of about four hundred persons there were not ten who had paid rents for periods extending from six to fifteen years".

Only about forty of the four hundred were crofters or heads of families; consequently, about forty only had pay rent. I have seen the receipts of many of them, some of which are still in my possession. I shall mention one, for instance, belonging to a widow Macpherson, who resided at Dune. Her husband was turned out of his croft a year before the rest, because, as everyone believed, he had been more deeply in arrears. I have seen his receipts for a number of years, and, as far as I recollect, his last rent was paid about three years ago.

When the time of departure arrived, fifteen or sixteen families refused to emigrate. They had sold their stock, retaining the money and had also secured a share of the clothing provided by Mrs Macdonell for the voyage to America. Of the above number of families only four were crofters; consequently, these four only had any stock to sell and money to retain would have given it up willingly to a farthing, had it been asked. And as it was not asked, they took it for granted that their debt was remitted to them like the rest.

John MacDougal, who had two sons sick of small-pox and fever in Elgin, and consequently could not have gone to Canada with the rest, likely retained the clothing previously received; about this I am not very sure in the meantime.

Flora Macdonald, Ridarach, had her clothing taken away to Canada, herself remaining behind; she did not embark with the rest of the family, and afterwards could not procure a boat to convey her to the ship; she told me so herself with the exception of these two cases, none of those who remained retained the clothing supplied by Mrs Macdonell.

Finally, "those who have been turned adrift are persons who at first promised to go with the rest whose passage to Canada was paid by Mrs Macdonell."

This statement is incorrect. l am not prepared at present to say how many had first promised to go with the rest and again changed their minds, but I am able to mention many who never promised to go, and have been turned adrift - Alex. MacIsaac, Dune; Alex. Macdonald, Dune; Duncan MacDougal, Dune John Mackinnon, Samadalan; Charles Macdonald, Samadalan ; Elizabeth Gillies, Nuigart; Allan Macdonald, Nuigart. Here are seven families who to my own knowledge never gave in their names for emigration.

If Mrs Macdonell had engaged the ship for a certain number of passengers, without ascertaining how many were actually going, she has herself only to blame for paying the passage to Canada of a greater number than she could afterwards make up.

No person is better acquainted with the particulars of the Knoydart emigration and evictions than I am. l am only willing to state facts accurately and without partiality, I have no interest or inclination to misrepresent either party.