A time of great popular interest the Clearances, or Removals as they were first known, which involved the removal of the local populations from the land they rented, to make way for sheep and then deer.

The wider process began in the early 1700s when farming ‘improvements’ started to spread across Scotland bringing with it evictions long before the Highland Clearances. From the Borders the changes crept north to the Southern Highlands before continuing to the north, north west and the Islands.

In the north the process was described as ‘removal’, even just emigration, until the 1840s when the word ‘clearance’ was used. It's often cited that the new 'flock masters' came from the south, but interestingly, most sheep farmers were Highlanders. See later comments by Iain S MacDonald from his book 'Glencoe and Beyond'.

Aeneas MacDonnell (Glengarry), owner of Knoydart died in 1852 on the edge of bankruptcy. MacDonnell’s management, of the estate and his other finances had been inadequate and, in many cases, he allowed tenants to fall into rent arrears. 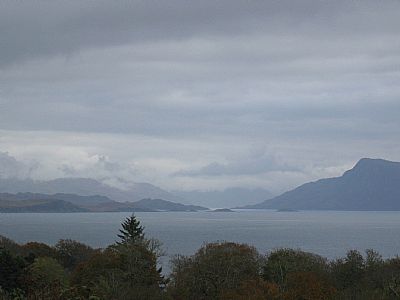 Loch Nevis from Sleat on Skye

During the early decades of the 1800s the whole economic structure of the Western Highlands was under pressure. Added to this pressure came the potato failure of 1846 leading to the famine that lasted until the mid-1850s; sometimes referred to as the Famine Clearance.

During September 1853 the Government transport ship Sillery anchored at Isleornsay, across the Sound of Sleat from Knoydart, ready to take 332 of the Knoydart inhabitants away to Canada - not to Australia as often reported.

It should be noted that there were earlier 'emigrations' in 1786 and a larger one in 1802.

However, reports following the departure of the Sillery say a smaller group of about 100, some of them classed as squatters, were subjected to greater hardship and harried around the estate for the next two years. The Scottish Tartans Authority noted that during 1853, “People are suddenly and forcibly evicted from their homes . . . Father Coll MacDonald, the local priest, erected tents and shelters in his garden at Sandaig, and offered succour to as many as he could”. 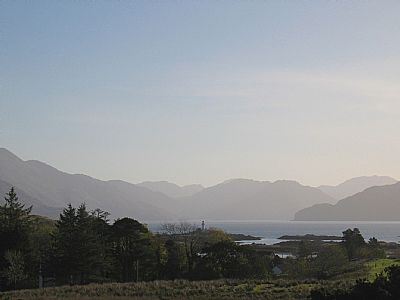 Political action also played its part. At the start of that famine the state and charities, co-ordinated by the Central Board of Management for Highland Destitution, shouldered the burden of poor relief. However, later in 1847 the government withdrew its support throwing the problem back to the landowners. This provided further motivation for many landowners to move the poor from their estates.

Some time in 1854 a Trust was established to run Knoydart Estate in the interest of its creditors (see the Napier Royal Commission 1884). During that period a number of Highland estates were under trust as estate creditors regularly appointed trustees to closely monitor the management of indebted properties.

“The extent to which beliefs are based on evidence is very much less than believers suppose.”

The Clearance years were far more complex than the somewhat simple story that has just been told, which also found its way into current histories.

The following comes from, Iain S Macdonald’s book, ‘Glencoe and Beyond - The Sheep-Farming Years 1780-1830’

Alexander Macdonald of Glencoe had leased numerous extensive tracts of land from various owners, including Kinlochnevis in Knoydart.

However, sheep-farming had been pursued in Knoydart for almost twenty years (c1780) before Alexander MacDonald leased Kinlochnevis from MacDonell of Glengarry.

These highland sheep-farmers would move from one farm to another and assume tenancies at appreciable distances from their places of origin. Sometimes they would have more than one farm, or money invested in sheep on the land of other farmers.

Stewart of Garth and Charles Fraser Mackintosh acknowledged, reluctantly, that there had been active Highland sheep-farmers who had cleared other Highlanders from their leased land to make way for sheep, they both treated it like a guilty secret which they would have preferred to ignore.

The hypothesis that many Highlanders from different backgrounds became sheep-farmers in the late 18th century and early 19th century challenges the widely accepted view that sheep-farming in the Highlands was developed and undertaken by southern incomers.

Some modern historians have dismissed the possibility that Highlander could have become sheep-farmers, because they lacked the necessary skill and resources.

'It’s important not to overlook the southerners who did come to the Highlands as sheep-farmers, but surprisingly little detail has been recorded about the incomers who have been credited with bringing about so much social and economic change. Some names can be found but little has been said about who they were, where they came from or how they were financed.

Frequently they seized opportunities to take over farms on which sheep-farming had already been established on a substantial scale by Highlanders.'

Much of modern writing on the subject has been a re-cycling of the anthology of material published by Alexander Mackenzie in 1883. A large part of Mackenzie’s material was about events in Sutherland, some in Skye, attributable to the development of sheep-farming there from 1807 onwards.

Alexander Mackenzie’s 'History of the Highland Clearances' has remained in print to the present times.

Highland Landlords encouraged Tacksmen, as well as outsiders to undertake extensive sheep-farming on large tracts of their estates.

“Next in dignity to the laird is the Tacksman; a lease-holder of land, of which he keeps part as a domain in his own hand, and lets part to under-tenants. He held a middle station, by which the highest and the lowest orders were connected. He paid rent and reverence to the laird, and received them from the tenants.”

The relationship between the Laird and the Taxman didn’t always work smoothly.

Alexander Dhu McDonald and his sons refused to vacate the land they leased (1802) at the head of Lochnevis. Once seeing off the Factor Mr Hood with a loaded rifle and a Broadsword.

Eventually, Glengarry had to get a Court removal order (1817) against Alexander Dhu and his sons.

It’s claimed Alexander Dhu was a wealthy individual with funds hidden from the Court.

Alexander Dhu died in suspicious circumstances – perhaps he died a violent death because of his quarrel with Glengarry but no record remains of how he died.

Alexander Dhu McDonald had become a nuisance and possibly a threat to Glengarry who was himself certainly capable of violence - Glengarry won a duel in 1798 in which his opponent died, he was reputed to have killed a gamekeeper and he committed several ‘bloody assaults’. In 1805 Dr Donald McDonald, at Fort Augustus, had crossed him and was severely beaten by Glengarry.

As the wool market began to slide Glengarry was having trouble finding tenants (1823) who were financially sound to take his farms in Knoydart leading to the troubled time a few decades ahead.

Alasdair Maclean in his book, ‘Night Falls on Ardnamurchan’, felt that to blame the Clearances for all the problems of the highlands are misrepresentations with no resemblance to reality.