It’s often claimed that a number of long-serving members of staff were paid off after the WW2, but the payoff described most likely relates to what happened when Lord Brocket initially bought the estate in 1933. 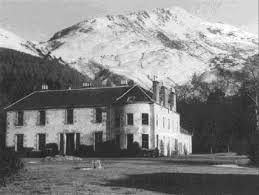 During the war Knoydart was a busy place as it fell under No. 1 Protected Area and Inverie House,STS24a, along with others in the Protected Area, were declared Protected Places. Glaschoille, STS24b, to the west of Inverie Bay was also requisitioned by the military.

“According to my father, it was an eclectic mix of children in particular - nearly all cousins, from Glasgow and the central belt - staying with their relatives in Knoydart to avoid the war. They all still have great memories.”

Following the end of the war there would have been a significant reduction in Knoydart’s civilian and military population.