Following the hard times of the Clearances there is often a great gap in the historical record, from the 1850s to the time of Lord Brocket, the Second World War and the 'Seven Men of Knoydart'. 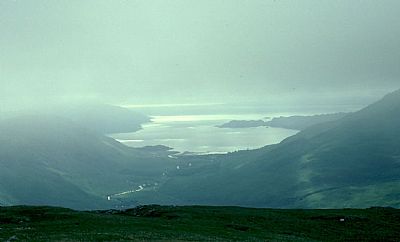 An example from the Sunday Times in February 2004 describes Knoydart’s past as follows:

“The estate was sold by the MacDonalds to the MacDonnells, who cleared the land and sold it to an Englishman as a sporting estate. In the 1930s, it was bought by Alan Ronald Nall-Cain, Lord Brocket a Conservative MP, Nazi sympathiser and notorious absentee landlord. In 1948, the ‘Seven Men of Knoydart’ took over a small area of Brocket’s land, on which they established crofts.”

This was all the journalist felt we needed to know, without even a mention of sheep, before moving on to describe more recent events leading to community purchase by the Knoydart Foundation in 1999.

The Englishman described above in the newspaper report, who ‘bought the estate from the MacDonnells’, was in fact James Baird from Monklands, Lanarkshire in Scotland, who bought the estate through the Trust that was managing the estate.

In May 1857 the Glengarry Estate, Knoydart, was announced for sale. The last of the estates once held by this powerful, ancient family.