Welcome to the
Neath Community

NEATH
Population 47,020
(in last cenus)
The inner hub of the Neath Guardian
As featured on an ITV documentary programme

Welcome to the website for the residents of Neath.

History of Neath
added to menu

"I am just embarking on a history of Neath and the Great War 1914-1918, with the idea of having a book published to coincide with the centenary of the conflict in 2014.  The book will, for the most part be a Memorial Volume of the men of the town who served, and particularly those who gave their lives.  Over the past few years, I've built up a database of over 450 men from Neath and area who gave their lives during the war - including family details, addresses, some pictures and where and how killed.  In order to make this book a success I will need to make appeals in the community for any material that will help tell the story of these men - letters, diaries, photographs, even medals.  Anything that can fill in the gaps. Much of this material will have disappeared, I acknowledge, but my experience suggests that much remains with families, tucked away, which could help tell the mens' stories.  I will be working with the West Glamorgan archives and other sources, and intend to advertise as widely as possible for material, but I wanted to contact Neath Community News as one of the first things I did to get your advice on how best to reach out to members of the community for help.  I want to make the book a fitting tribute to the men and women of Neath, so if you have any suggestions I'd be most grateful to hear from you and the readers of this website." 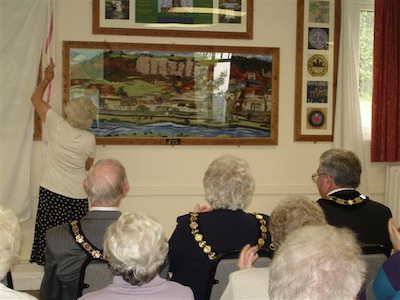 It was one of the very last engagements outgoing Mayor Lella James  and consort Cllr James fulfilled before her term of office was over and they had a terrific time at the event.
At the unveiling were Dyffryn Clydach Chairman Cllr Martyn and Mrs Peters, children and young people of Mynachlog Nedd Juniors and Dwr Y Felin Lower School.  It was a wonderful project and the celebration held at the unveiling will be remembered for a very long time.

We were highlighted
on ITV (Wales)

The programme dealt with the loss of the NEATH and PORT TALBOT Guardian newspapers.

Qhy did they cease publication?   They were the only papers in the Mirror Trinity Group to do so.   It is alleged that they were NOT losing money.   Several reasons are suggested by the Neath Ferret including a conspiracy theory.

The big question is: "Will ITV Wales take it a step further and look at all the facts?"    In this day and age of democracy all should be revealed.

Like many other provincial newpapers, the current financial climate has caught up with the Neath Guardian, the newpaper that has brought local news to the residents of Neath and district for the past 84 years.
In the edition dated 1st October 2009 it said goodbye to its readers.

Although the paper survived World War 2 and several recessions, the present economic downturn  has forced Trinity Mirror North West and Wales (Media Wales),  the group that owns the Neath Guardian, to
restructure their business.  The writing appeared on the wall when they closed their Queen Street office in Neath earlier this year and moved to Bridgend.

In its heyday the newspaper was the prime local news provider for births, deaths. engagements and weddings -  announcements that have been sadly missed in recent years.

It must be said that ithe Guardian never seemed to come to terms with the Internet and never reported on local websites and gave the impression of avoiding them.   Ironically, Media Wales now say that they are going to develop their online presence through WalesOnine.co.uk.

On the day the Guardian annouced its farewell, the BBC news website reported that advertising on the Internet had overtaken the advertising on television.  No doubt the newspaper had also felt the effect from this source of income.

Hopefully this website will help towards reporting local news - it all depends on what is submitted to us.  All we can say is that we are based in Neath and will therefore take an interest on what is happening around us.   We look forward to the future.

Disclaimer. We are not associated with any advertisements on this website and do not endorse them in anyway whatsoever.

Information is collected from various sources and is published in good faith.   No responsiblity is accepted for any errors or ommissions.  Every effort will be made to correct errors when we are made aware of them.