News you may have missed.... 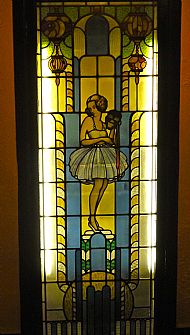 The stained glass windows from the former Empire Cinema have been saved, thanks to Jason Reynolds of the Heritage Scene - Neath.   They are now in safe keeping at Swansea University until a new home is found in Neath.

They have been donated to the people of Neath by the Coastal Housing Group, who now own the freehold of the Empire building.

The window on the left was formerly on the main staircase leading to the auditorium of the cinema, which later became a Bingo hall which closed in February 2010.

More than 3,000 people have signed a petition opposing to plans to close a Neath school.

Cwrt Sart secondary school in Briton Ferry is one of three earmarked by Neath Port Talbot council (NPTC) as part of reorganisation plans.

The council blames falling numbers and age of buildings and it wants to build a £27m super-school in Baglan Moors.

Sandfields and Glanafan comprehensive schools are the other two set for closure by 2016.

The site at Dwr-y-Felin Comprehensive School was occupied by a Roman timber fort in the 1st Century, before it was replaced by a stone version
Continue reading the main story

Excavation work on the site of a Roman fort near a school has revealed what archaeologists believe are structures never previously seen in the UK.

The dig in the playing fields of Dwr-y-Felin Comprehensive Upper School in Neath has uncovered sections of the defences of the 1st Century building.

These include a defence tower partially set outside its ramparts allowing soldiers to shoot at gate attackers.

A fort was in occupation on the site until at least the 3rd Century.