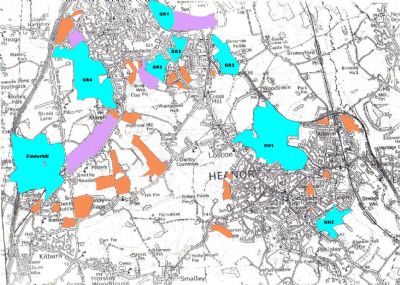 THE RAPE & MURDER OF AMBER VALLEY

The blue represents the "new" builds that AVBC are trying to push through, the orange are smaller builds and the lilac are industrial sites some in situ some are proposed

I added these to a donated map and information from the latest map received from the exhibition last week as Waingroves,

I saw on MSN News that Countryside campaigners have challenged suggestions there is a shortage of brownfield land for new housing, claiming previously developed sites could be reused to build 1.5 million homes.

The Campaign to Protect Rural England said the figure for England was equivalent to around six years' supply of housing at the rates the Government says new homes have to be built, or a 10-year supply if building continues at 2009 rates

A Department for Communities and Local Government spokesman said: "The draft policy would require that councils' plans should allocate land with the least environmental value. That means brownfield sites would be prioritised for regeneration except - as in the case of urban nature reserves - where they have become ecologically valuable."

The plan needs replacing with one that looks firstly at RE-DEVELOPMENT as opposed to the rape of our countryside!

The developers are rapidly buying up our green fields in anticipation of the proposed builds, They will then sit on the land like they are doing on the Borker site and have been for the past 10+ years!!! Which means that MORE land will then have to be designated

The council logo is …. Amber Valley “”Making a difference”” then please MAKE a difference and re-draw these plans to designate re-development sites INSTEAD of green fields

David Cameron, Nigel Mills, bodies like CPRE, English Heritage, National Trust and the local people who protesting outside are AGAINST these intrusions into our green spaces, PLEASE LISTEN TO US!!!

On the Full council meeting on the 2nd November, Councillor Bradford insisted that the planning board and the councillors HAVE listened to the public, and would not be selling the CISWO land and infact adding to it, then he stated that the eco-store and proposed house builds would still go ahead on a smaller scale

You say you HAVE listened to us?? Then how come the consultation questionnaire for the Greenwich Forty-horse proposal, numbered at 25 for and 115 AGAINST this eco store, I ask again HAVE you listened to us? Do we REALLY want this store??? I THINK NOT, I do NOT think you have listened to us at all!!

This is no longer about Waingroves or Greenwich or even Swanwick, this is about AMBER VALLEY and we from AMBER VALLEY say NO! to these proposed greenbelt & greenfield builds! And we will continue turning up here to say NO! until you DO listen!