at Ripley Town Hall last night, Monday 20 February in response to the "SAVE SWANWICK" petition,  presented to the council.  The invitation to the public followed a decision at the Council's last meeting, held in January, to refer the 'Save Swanwick' petition for further consideration. The petition was signed by 1,800 people objecting to two potential locations GA4 & GA5 for housing growth in Swanwick.

Swanwick representatives and Swanwick Parish Councillors with concerns about the possible new housing locations in Swanwick had been invited to voice their concerns at the specially arranged Working Group meeting. The working group chaired by Cllr Stephen Hayes, consists of councillors and officers who meet to discuss Options for Housing Growth in Amber Valley.
The meeting started with a presentation given by planning officer Rob Thorley explaining the Borough Councils stance on the Core Strategy, and what it means, and the process and timetable the Council is working to. It was also a chance to hear about the challenges the Council faces to provide locations throughout Amber Valley for housing.
Swanwick residents, lead by Mr John Briggs and Swanwick Parish Councillors were then given alloted times to express their concerns on the two Swanwick sites proposed for possible large scale housing. Subjects spoken about included concerns of building on greenbelt and green field sites, infrastructure, schools, flooding and wildlife.
Various points raised in the speeches given, where then clarified by the working group. The Borough Council stated that the 17 strategic new housing sites proposed all had to be considered equally, and that no site could be dropped at this moment in time due to fear of legal action taken against them from agents, landowners and developers who had made the sites available for development. It was openly expressed by some of the Borough Councillors that they did not want to see any new builds on Greenbelt and Greenfield sites in Amber Valley.
It was quoted that exisitng sites where also being explored for redeveolpment, notably the demolished Butterley Works site which could provide some of the land required for 5000 new homes required across Amber Valley.
It was suggested to the working group that other locations should be considered such as land taken up by closed down public houses and currently vacant residential properties.New developments on Brownfield sites being the priority above any other type of land was also insisted to the Working group.
An open debate expected by the Swanwick residents was not entered into, and it was stated that a short list of sites for further consultation should be released some time in the middle of the year. A brief questions and answers session concluded the meeting. 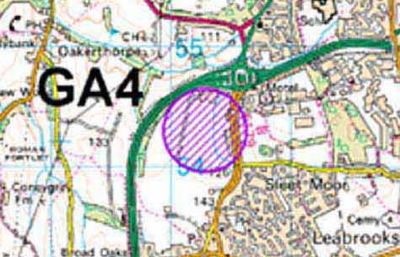 GREATER ALFRETON
EXTENSION(S) TO THE NORTH WEST OF SWANWICK - GA4
Pros
• This would not involve development in the Green Belt
• This site is located in close proximity to a junction on the A38
• There are no formal environmental, landscape or heritage
constraints
Cons
• The site is not very well related to existing settlements 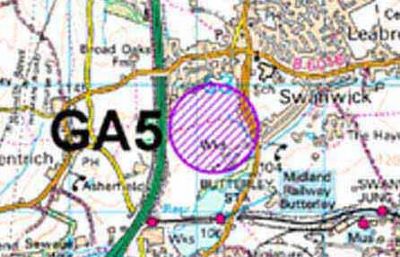 GREATER ALFRETON
EXTENSION(S) TO THE SOUTH WEST OF SWANWICK - GA5
Pros
• The site would be constrained by the A38 and the Butterley
Reservoir, which could act as a defensible barrier against
any further encroachment into thecountryside
• There are no formal environmental, landscape or historical
designations
Cons
• The site is within the Green Belt
• There is a sewage works adjacent to the southern boundary
of the site
• The site is not very well related to the town centres of Ripley
and Alfreton
• The site is not near a railway station.

Speeches made on the 18th January 2012, at the AVBC Full Council Meeting

The most sustainable development must be, the Redevelopment and Regeneration of brownfield sites. Where land was previous developed, it can now be reused,  to satisfy the demands of current and future generations. By cleaning up these Derelict; Discarded and Decaying sites, there is a fantastic opportunity; to build houses for the immediate future, to halt the coalescence of communities, to stop the loss of, the individual identities of these communities, and to keep the green wedges and areas intact.

The latest information from the “Homes and Communities Agency”*, indicates that local authorities have identified, an estimated sixty three thousand seven hundred and fifty hectares* of brownfield land, and more land is available every year.* That is enough for around 3 million homes, and yet over 51% of this land is left derelict and vacant* despite it being prime for redevelopment. Locally this would include the  Stevenson’s site at Ambergate, and Vyella at Somercotes If this is the case nationally, then why, in the 2008 Amber Valley Strategic Housing Land Availability Assessment*,

of the 207 sites identified, only 48 were designated as brownfield sites,- that is less than 25%. If all 207 sites were developed, that would provide a future capacity for  over Thirty Eight Thousand homes*. Three times the size of Ripley!!!  Unfortunately less than three thousand of these homes would be on brownfield land LESS than 8%*. Yet as a result of Core Strategy BD3, and reported in the Employment Land Review, there is an over supply of employment land available in Amber Valley.

One option for this land is to reclassify it, making it available for housing development, as part of the boroughs sustainability, and thus to maintain it’s “Core Output Indicator H3” of “building 60% of additional dwellings on previously developed land”* Amber Valley Borough Council should be PROACTIVE in seeking out further appropriate brownfield sites. The Housing and Communities Agency*, is currently working with about 80 local authorities to assist them to produce “local brownfield strategies”. Amber Valley needs to be one of those councils, leading the way. * Reference points

Since 1970 Swanwick has been totally transformed from the village it was. It has trebled in size with the amount of new private development that has taken place every since that date. Apart from the required infrastructure road works to these developments, there has been no improvement to the overall main highways. With the increased traffic from the developments, the whole village becomes more or less gridlocked during rush hour times – any new development will only add to further chaos.  From the extra traffic, there have been a number of fatalities which has resulted in the dual carriageways being hatched down to one lane to slow vehicles down. As the proposed development is landlocked with very few access facilities it would  automatically increase the traffic through the lights, the village and dual carriageway. A “feeder” road from an island at the bottom of the carriageway would only lead to even more chaos i.e. Hickton Road being used as a “rat run”.  In early 1990’s an application for 65 units was submitted by a developer on Derby Road South and was subsequently refused on the grounds of poor infrastructure and congested supporting roads.  There are alternatives to building on greenbelt/greenfields:  As Government policy states, there are currently 1,999 empty homes within the Amber Valley area, which could be brought back to accommodate the 700 families on the waiting list.

There are numerous brownfield sites that have already been identified with planning applications and other brownfields sites could include derelict garages, public houses, factories – all of these of which are scattered in Amber Valley and would provide hundreds of new homes and stop the blight of unsightly areas therefore improving the area as a whole.  The fact that over 1800 people have signed a petition says it all – there should be no more building and the green fields should remain for all to enjoy and keep Swanwick a village.