This build is for 98 houses, which will bring an extra, estimated 636 car journeys a day, onto a road that is gridlocked at least 4 times a day 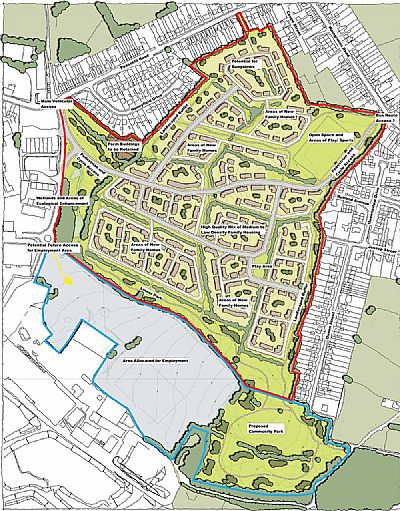 Most have been mentioned at the site meeting, by letter and even here

The water issue, the schools, the traffic, the risk to the emergency services, AVBC’s under designated recreational areas, the congestion and the list goes on and on

Lets look at the positive side for a moment, There will be on offer a football pitch, mmmmm, now we have one of those just over the fields at Codnor with plenty of parking spaces, easy access, all it lacks is a changing rooms area

What about the allotments, mmmmm, they are building on the Codnor ones at the moment, could be this is what would be the next step for this build??

So what exactly is this build, it is in fact a departure from the local plan, most locals have no idea what this means so I would like to highlight a few points about this, under the old system, we point out what is wrong with this and the Council officers in planning meetings influencing decisions working with the developer to assist them with overcoming any objections the have been put forwards and NOT working with the community who’s life it is affecting, who know the current situation…..

Would we fare better under the new National Planning Policy Framework? It would have to put into practice the Duty to Cooperate Neighbourhood Planning and other changes. The draft framework sets out important issues to think about when local councils and Communities make plans for, and decide, what new development should take place.

Thinking through these important issues will help communities enjoy a better quality of life, both now and in the future. The Localism Bill will place a new Duty to Cooperate on the councils. The Duty means that local councils should work together with other public bodies, on planning issues that impact beyond local boundaries. The Draft Framework puts into practice the Duty to Cooperate

The Draft Framework sets out a new tool for local communities to protect the green areas that are very special and important to them. They can save local green space land to be protected that is important to local life because

It has natural beauty

It has important history

It is important for sport and entertainments

It is tranquil or calming

It is rich in wildlife

The area is between two local boundaries Waingroves and Codnor,

It HAS natural beauty

It HAS been important for sport and entertainment

It IS tranquil and calming

It IS rich in wildlife

I ask you to listen to the community, as the Council Officers seem to work to dismiss objections and push it through for the developer, and NOT for the communities benefit as a whole

I ask the planning board to reject this application and the departure from the adopted local plan at this time, so that the residents in the future, in Waingroves and Codnor can have under the new National Planning Policy Framework greater choice to decide the look and feel of the place that they love and to influence decisions which might affect them through local and neighbourhood plans

GREATER RIPLEY
DEVELOPMENT BETWEEN RIPLEY, CODNOR AND
WAINGROVES - GR3
Pros
• This would not involve development within the Green Belt
• The site is relatively close to Ripley town centre
• There are no formal environmental, landscape or historical
designations
Cons
• Highway infrastructure constraints
• Without careful design, development in this location could
lead to the coalescence of Ripley with Codnor and/or Waingroves,
which has been strongly resisted in the past.
• The site is not near a railway station
• The land is well used by local residents for informal
recreation

Whilst not designated as “countryside” on the Proposals Map to the Amber Valley Borough Local Plan it is accepted that there is a perception that the site lies within “countryside” Therefore the appeal proposal is contrary to the provisions of Policies EN1 and H5, However, and notwithstanding Section 38(6) of the Planning and Compulsory Purchase Act 2004 but taking account of Sec70 of the town & Country Planning Act 1990 (as amended) ther are a number of issues that are capable of being material considerations that should be afforded weight in the decision making process, these include

a. The Council does not have a 5 year supply of deliverable sites (para 71 of PPS 3): this will be demonstrated
b. Therefore the Council does not have a 5 year + 20 supply of deliverable sites (para 109 of draft National Planning Policy Framework) Housing cannot therefore be delivered within the framework settlement outside of the countryside. The appeal proposal is deliverable
c. Development of the appeal site would be compliant with para 68 of PPS 3 This will be demonstrated
d. There is a very significant need for affordable housing in the Borough and significantly within the Housing Market Sub-Area of Ripley. This is demonstrated in the Housing Needs Assessment. The site will deliver affordable housing in accordance with the Council’s Policy H10 of the Amber Valley Borough Local Plan
e. The site is deliverable and capable of making a positive contribution to the provision of market and affordable housing in the locality without delay, there are no technical impediments to delivery
f. A full Transport Assessment was submitted with the application and the County Highway Authority accepts that the local highway is capable of accommodating traffic movements associated with the site
g. A flood Risk Assessment was submitted with the application and the Environment Agency is satisfied with its conclusions and has no objections
h. Both Derbyshire Wildlife Trust and Natural England have no objection to the proposal
i. The appeal proposal will deliver some 4.92 hectares of open space on an overall site of 7.92 hectares
j. The site is grade 2 agricultural land
k. The appeal site is a sustainable site and complies with the Council’s sustainability policy LS1 This was articulated to members of the Planning Board. The draft Planning Policy Framework indicates a presumption in favour of sustainable development
l. Development of the appeal site would not adversely impact on the strategic direction of growth in the Borough. The scheme is for a maximum of 98 dwellings and is not strategic in nature
m. The Amber Valley Local Plan was adopted in 2006 and was to have effect until April 2011. There has been no review. The Local Plan is out of date
n. In the absence of a Core Strategy and with an out of date Local Plan cognisance should be given to advise contained within the draft National Planning Policy Framework. The local Development Scheme on the Council’s Web Site only runs to March 2010. In the recent consultation the Council indicated the publication of a draft LDF Core Strategy in early 2012. It is now understood that will now summer 2012

The Council sought to include the appeal site and adjacent land in the green belt, the Inspector did not consider this was appropriate. It was an Area of Local Landscape Significance put forward by the Council “to restrict urban sprawl”

Two planning appeals relating to the site within the green belt and the Council did not provide evidence as to why it should attach any particular designation. Notwithstanding the passage of time there has been no evidence put forward to suggest that this land should attract any special designation

The above represents the outlines of the grounds of Appeal. A public Inquiry is sought when a Statement of Common Grounds, Statement of Case and Proof will be presented for cross examination