21st June, Mike's 3rd walk was to Potwell Dyke Grasslands, located a short walk from Southwell Minster. Hundres of Orchids were seen including Southern Marsh and a small group of Bee Orchids.

29th May Mike led a walk to see Green-Veined Orchids at Muston Meadows in Leicestershire. On a hot day, 8 members located and enjoyed the sight of numerous Green-veined orchids.

Saturday 24th April, Led by Mike Harrington, 4 of us met at Bunny Old Wood, for our first walk this year. Walking through the first part of the wood, we passed a carpet of yellow celandine intermittently with green dogs mercury. Arum Lilly leaves were apparent. We saw lots of dead nettle plants and growing round clusters of beautiful white wood anemones. Wild primroses were seen in between  in clusters of pale yellow. Coltsfoot was seen and beds of white wood anemones. The delicate light and dark blue violets peeped out in between. Forget me nots  were spreading their growth and hairy bittercress growing on the verges. We then saw a wild strawberry plant and spotted greater stitchwort with its delicate white flowers .
As we passed the pond we could see a good growth of iris  (not yet in flower ) Blackthorn tree, plum and wild cherry trees looked stunning with their blossom of colourful whites and pinks and crab apple blossom too.
We progressed and passed more and more hazes of bluebells. Though many of them still in tight bud form.  Where the dappled sunlight got through the trees more and more open bluebells were making a beautiful blue carpet which contrasted with the light blue of forget me nots.

Bunny Wood is full of colour and herb Robert was spotted. The bird song was amazing too, we heard a chiff chaff, two robins, wrens, 2 buzzards, a nuthatch, a song thrush, a green woodpecker, a blackbird, a great tit, a pheasant, a wood mouse was spotted and squirrels running up and down trees
Insects :- Bumblebees, Ladybirds and Flies. In all it proved to be a lovely walk with much to see. By Josephine Humphreys.

1st October, Toton Sidings, a walk by Mike Harrington and Josephine Humphreys: It was still sunny at 4 pm . We walked across the rough trail. There were still some flowers adding to the Autumn colour around us. Autumn fruits too, such as blackberry fruit: hawthorn: rose hips. The flowers included ox-eye daisies; red and white clover: toadflax: yarrow; small hawk bit; large hawk bit; vetch; white dead nettle; nipplewort; convulvulous. The birds we saw that afternoon were a house sparrow, wood pigeons and magpies. lnsects along the way included common wasp; midges; blue hawker dragon fly, white tailed bumblebee. One or two horse riders across the sidings enjoying the late sunshine. There were an abundance of ferns near the woodland area, groundsel was dotted between the grasses. It was surprising to see at this late season how much  growth is still around if we look hard enough.  The sun was setting as we came away. We particularly enjoyed the bright yellow toadflax which was plentiful. A good afternoon for a walk. Josephine Humphreys.

28th September 2020, Swan Lake (Straws Bridge). A warm sunny afternoon,  no wind. In the meadow we saw ragwort ; birds fool trefoil ; clover red and white ;ox eye vetch; white dead nettle; meadow sweet; convulvulous ; hairy willow herb ; stock;ivy We were lucky to see insects and large white butterfly; small copper ; speckled wood ; wasps on flowers  midges were a nuisance !!  Hawker dragon flies (4)  As we walked quietly on we spotted a large rabbit feeding ; 2 rats  Walking near to the ponds we counted at least 30 swans one had 4 cygnets following in a line !  Coot : moorhens ; black headed gull; robins  blackbird ; flock of tits Canada geese . As we watched these amazing birds we saw three swans land in the water skimming along just like a jumbo jet landing at Heathrow !!  We enjoyed seeing the life still around even late Summer by Jo Humphreys and Mike Harrington.

The icing on the cake was when we saw all the masses of white in the forest of beautiful snowdrops : clusters in between the trees as well as a carpet of white in the woodland their white heads dancing in the wind.

A robin could be heard as he followed us for a while plus a blackbird was spotted, a crow and magpies seen, bluetits darting for shelter. A good day for us all.

Patricia McHale's report of 29th June, 2019: At 10.30 a.m. on a hot Saturday morning, six members of the Society gathered in the Hartington Trails car park to spend the day walking along the Trails and Meadows, led by our botanical expert Mike Harrington.  Hartington Meadows is a relatively new nature reserve and we were well prepared - hats, bottles of water, our botanical books & in Mike's case, two folding stools.

We started slowly, making our way towards the exit of the car park, noting Cleavers, Speedwell, Bugle, Hogweed, Herb-robert, Herb Bennet  and trefoil, together with several insects e.g. Crane-fly, Saw-fly, Harlequin ladybird and Hoverfly.  We also heard the song of several birds, including the Willow warbler, Greater-spotted woodpecker, Thrush, Blackbird, Blackcap and Wren.

Eventually, after around three hours, we reached the steps up to the area before the hay meadow, where we saw a mass of beautiful orchids, including the Common spotted orchid, Fragrant orchid, Pyramidal orchid, and Common Twayblade.  During this time we had noted several butterflies flying in the hot sun such as Small Tortoiseshell, Small Heath, Meadow Brown, Small skipper and Red Admiral.

When we reached the hay meadow, there was a wonderful vista of meadow land against a cloudless blue sky, our little group being entirely alone to enjoy the views. A Painted Lady butterfly flew around us for several minutes. After about half an hour we started to make our way back to the car park still recording several more varieties of wild flowers e,g, Yellow rattle, White campion and Black medick, after which it was ice-creams all round.  We all agreed it had been a very rewarding day, seeing, not only many wild flowers, but also interesting insects and butterflies, thanks to Mike and his botanical knowledge.

Saturday 27th April - Barnack Hills and Holes. This reserve south of Stamford is an abandoned limestone quarry dating back to roman times and is owned by Natural England.  It is nationally important as it has the very rare Pasque Flower amongst other delightful plants. Leader Mike Harrington.

13th April, Mike Harrington led 8 members on a walk to Holly Wood and Oldmore Wood, Strelley.  The verges on Robinettes Lane provided Bugle, Greater Stitchwort and Speedwell. Holly Copse on the right hand side of Robinettes Lane gave us an array of Wood Anemones, which were mostly white but a few examples were pink. Also in Holly Copse was a small area of Wood Sorrel growing on some rotting wood, and Yellow Archangel just coming into bud. The Lane leading down to Oldmoor Wood had some lovely examples of Common Blue Violets. The Bluebells in Oldmoor Wood were still mostly in bud, but it was quite obvious that in another week or so, it will be an absolute carpet of blue (so well worth a visit over Easter). A total of 33 species were seen in flower. Whilst in Oldmoor Wood, we saw a Treecreeper and a Brown Hare, and heard a Greater Spotted Woodpecker (drumming) and a Green Woodpecker (cackling). 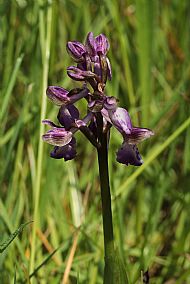 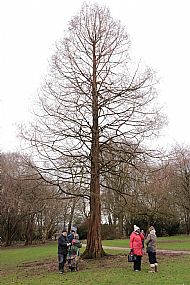 A Water aven at Hassop
photo by Chris Bull 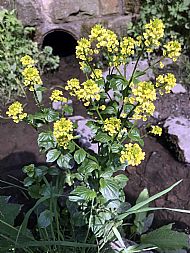