Visit to Hoe Grange Quarry on August 8th 2019, Eight hopeful and determined nature-watchers arrived at Hoe Grange Quarry, near Longcliffe in Derbyshire. This visit had been planned to coincide with the emergence of the second brood of Wall Brown butterflies, and our timing was perfect. Ray Walker, the warden, told us that he had recorded the first sighting of a single male on the previous day, but on a warm, calm, and mostly sunny day, we were treated to good sightings of both males and females in various locations around the quarry.

Besides Ray, we were also privileged to have Ken Orpe, the Derbyshire Butterfly Recorder, on site with us, and between them, they were able to point out a total of 18 species of butterfly on the day – a good total, which included a Brown Argus.

The newly-created pond in the western quarry is now attracting both plants and wildlife, and in particular, dragonflies and damselflies. The Emperor Dragonflies gave us stunning displays and challenged the photographers to catch them in flight as well as during ovipositing.

The birders in our group were pleased to see both Whitethroats and Redstarts as we wandered around, but the resident Little Owl did not show.

On our return journey, five of us could not resist the opportunity to call in at Hopton Quarry, and again, we were very lucky. Though the predominant butterflies were Peacocks, which were everywhere, we also had good sightings of Dark Green Fritillaries and Silver-Washed Fritillaries.  Dave Gilbert

A day of mixed weather lay ahead, but nonetheless 9 people gathered in the village hall car park at Ticknall.
Throughout the morning  we visited several meadows which yielded good numbers of grassland butterflies inc: Gatekeeper, Meadow brown, Ringlet & Small skippers. At the 2nd meadow which had a pond a Kingfisher flew from a low slung perch to the far side of the bank...it's electric blue back bringing some wonderful colour to the walk. At the 4th meadow/pond a number of Damselflies were studied and photographed these included: Blue-tailed, Common Blue, Red -eyed and Azure most of these were alighting on the pond Lily pads. A Black-tailed Skimmer (Dragonfly) was disturbed from the path and flew over the pond which was a nice addition to the list, also a number of Rudd were seen swimming just below the surface. As we entered the Lime Yards I saw a Silver-washed Fritillary swoop down and land on a bramble and this was seen by most of the group, but distantly.
After lunch, we headed to nearby Cloud Wood which gave us a closer Silver-washed Fritillary as it sat on a leaf, where we could observe the silver patches on the underside of the hindwing from whence it gets it's name.

12 sp of Butterfly were seen, along with 4 sp of Damselfly and 2 sp of Dragonfly.

An excellent day was enjoyed by all, Chris Preston.

18.11.17: Joan Bassey led 11 members on a walk around Martin's Pond, Harrison's Plantation and Raleigh Pond. 23 species of bird were seen:

A pre-walk and team searching meant we were rewarded with a considerable variety of fungi which included: Blushing Bracket and Turkey Tail on a big old willow. Glistening Inkcap, Stump Brittlestem, Xylaria hypoxylon and others still awaiting identification.

The finale was an Orange Ladybird.

2 Goosander, one with an itch.
A total of ten females seen on Raleigh Pond. Photo by Nigel Downes

A Heron taking off on Raleigh Pond
Photo by Nigel Downes 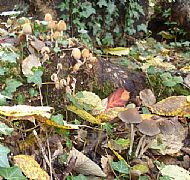 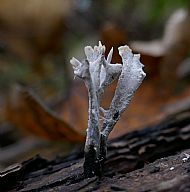 This Orange Ladybird
landed on Audrey, most of the group hadn't seen one before and because of it's colour, some found it hard to believe it was a ladybird. Photo ND
Part of spanglefish.com - Web Sites. For Anyone. For Free. Sign up now!
sitemap | cookie policy | privacy policy | accessibility statement