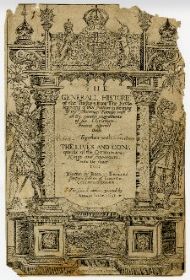 Image © Trustees of the British Museum

According to ‘Round and About Cold Ashby’, Richard Knolles, author of a Generall Historie of the Turkes (1603) was born in Cold Ashby c. 1540, his marriage with Mrs Frances Lyoldenby being recorded in the the Cold Ashby register in 1560 and his burial in 1610. This information appears to have been gleaned from the History, Topography, and Directory of Northamptonshire (p.336,Francis Whellan, 1870) which also asserts that 'he had a numerous family, the baptisms of three sons and three daughters being in the register'.

A brief visit  to this site, however, suggests that he was buried in St. Mary’s Church. Sandwich, though, apparently ‘there is no memorial remaining of him’ there.

The ‘Old House’ in Crabtree Lane was, originally named after him, so he may (or may not) have lived in the lane. Certainly, most sources leave us with the impression that he lived in the village before going up to Lincoln College, Oxford c. 1560 and graduating with an MA around 1565.

After graduating, he was appointed Master of the Free School in Sandwich, where it was initially noted that he was 'doing much good in his profession and sending many young men to the universities'.

Later, however, he was,allegedly, dismissed for spending more time on his own studies  than teaching his pupils.

The General Historie, a narrative constructed from a compilation of previous works, is expressed in a style which ‘though somewhat obscured by time, and sometimes vitiated by false wit, is pure, nervous, elevated, and clear.’ ( Johnson, 1The Rambler no.122)

The work apparently took twelve years to complete and remained the main English source for those interested in its subject for about two hundred years. It has been suggested that Shakespeare may well have read the book before he wrote Othello, as Knolles stresses the strategic importance of Cyprus in the struggle between Turk and Christian.

1Obviously, Dr. Johnson's periodical, The Rambler, (published in 208 numbers between 1750 and 1752)  should not be confused with this humble website!

Thank you for your interest - read more on Cold Ashby's History here.