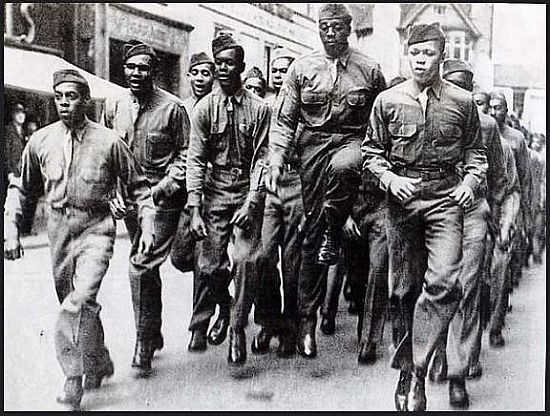 Seventy five years ago fighting broke out in the streets of Neath when black American soldiers came face to face with their white counterparts.  This was not the only racial disturbance in the town or indeed in the county.  Forty four clashes between white and black American troops were recorded in Britain between November 1943 and February 1944 alone!

The first GI's landed in Britain in January 1942 and by the end of the War about three million US soldiers had passed through the country.  Amongst them it is estimated that there were around 100,000 black American troops and they were segregated in Britain as, of course, they already were in America.

Figures vary but it is believed that at the start of the war the British black population was something above 20,000, most of who lived in London.  It should not therefore come as a surprise that the arrival of five times as many black Americans would create something of a cultural shock to the local population.

The 398th Engineer General Service Regiment set foot in Britain 1st August 1943 and on 15th April the following year they moved from their base in the West Country to Porthcawl where they set up camps at Kenfig Hill and Queen’s Field.  There they undertook more basic combat training.  This area was the headquarters for exercises in port construction.  The unit finally crossed the Channel on 1st August 1944.

Both American units worked hard and played hard, some commenting that it was like a holiday with nearby attractions such as Coney Beach.    Occasionally, these troops would travel as far afield as the town of Neath.

The altercation described below was not mentioned in the press but a full account was given by the Chief Constable to the Neath Watch Committee.

[These minute books at the Mechanics Institute are a mine of information for any activity in the Borough from 1922 onwards].

“A disturbance arose in Neath on the evening of the 1st May 1944 when coloured soldiers of the United States Army attacked a white American.  This led to an affray in which about 50 coloured troops and about 45 white troops were involved and which broke out at about 11 p.m..

Four coloured soldiers were detained by the police but were released later as nothing could be proved.

D.C. Morgan (Edgar Morgan) received a stab wound in the rump, two inches deep and one of my uniformed officers, P.S. Roberts (Hugh Roberts) received a badly bruised leg.  Great difficulty was experienced in controlling the disturbance even with the assistance of several members of the United States Military Police from Swansea.”

This was far from the end of such disturbances.   At 10.30 p.m. on 23rd June 1945 a dance was taking place at the Mackworth Dance Hall which was above Burton’s store in Green Street.  British servicemen took exception to the presence of black American troops and a general challenge to a fight was made.  The Americans left the building, trying to avoid trouble, but were followed by the British troops and other drunken civilians.  A general fight ensued and the Americans ended up being taken to Townhill for their own safety before being returned to barracks near Swansea.  One British serviceman alleged that he had been injured by a knife carried by one of the Americans but there was no other corroborating evidence.  The consequence was that a request was made that Neath be placed out of bounds for American black troops.

The above proves that there is nothing new under the sun.  Nearly 250 years earlier when Mackworth brought immigrant workers to the Mera in order to work the mines the locals abused them calling them, “Shouting, black, offensive, dust creating, apple stealing, window breaking coal-carriers.”  Oh how we make strangers welcome!!

Just three days after the Mackworth Dance Hall altercation yet another incident occurred in the town.  P.C. Owen met with two black American soldiers emerging from a hostelry the worse for wear.  They were aggressive, obviously under the influence and using abusive and insulting language.  A British soldier tried to help the policeman and a general melee broke out as a result of which a pane of glass in a shop door was smashed and the policeman suffered several blows to the face and body and a wrenched thumb.  The most incensed American was arrested whilst the other was taken to the Police Station for his own safety.  Both were returned to their units under escort.