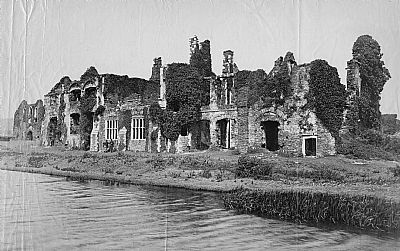 Dedicated to the Holy Trinity, Neath Abbey was founded in 1129.  It was re-dedicated to St. Mary the Virgin following the merging of the Savingian Convent with the Cistercian Order.  The present remains are of the second church dating c.1270-1330.  In 1542 the buildings were sold by the Crown to Sir Richard Cromwell, but there is no evidence of him residing there.  A later owner Sir John Herbert converted some of the buildings into a c.16th manor house replacing the Early English architecture with the Tudor style and so creating quite an anomaly.  Eventually through Philip Hoby the estate passed to Lord Dynevor.

Centuries of neglect, ruin and decay followed.  Broken walls were ‘robbed’ of stone particularly for the larger quoins of Sutton stone, which maybe found in later buildings throughout the neighbourhood e.g. the tower of the Parish church of St. Thomas.  The industrial activities of copper smelting and an iron foundry operated within the Abbey walls, with other portions converted into crude homes for metal workers.

Later again, it became a general area for the dumping of rubbish of all kinds.  Unrestricted to access it became a playground for children by day and the lair of tramps by night.  Gangs of idlers would deliberately demolish walls using ropes for vandalistic amusement.

So it would remain until 1924 when the 9th Lord Dynevor permitted Glen A. Taylor and his assistants to undertake the mammoth work of excavating and researching the complex.  The four founder members of the party were Glen A. Taylor, C Stanley Thomas, Frank E. Taylor and Lewis D. Thomas.  Over more than ten years following, the project was undertaken by a small band of enthusiastic volunteers (nicknamed gangsters) of both sexes which included some members of the Neath Antiquarian Society.  Working in gangs that seldom numbered more than ten, they removed a total of 7,000 tons of detritus before their task was over.  The first work was to dig exploratory trenches in several areas.

C. Stanley Thomas states “…. this was heavy and dangerous work as the trenches were 13 feet deep in some places, in loose soil which frequently collapsed – fortunately, no one was hurt.” and from the lectures of Glen A. Taylor “ … In the early days, the spoil had to be thrown over a seven foot high wall.”

Later the work was greatly eased by laying a tramway system. As the Abbey ruins were slowly unearthed with painstaking care many interesting features were revealed to the light of day after countless years of concealment.  These included the book store, situated under the night stairs, and two chapels in the south transept with their altar bases. Most interesting was the fine carved stone handrail of the night stairs which had been hidden by a dry stone wall necessitating the removal of around fifty tons of material.  Portions of Mediaeval tiles were found along with a piscina (a stone basin for rinsing sacred vessels).  The greatest depth of rubble is recorded as 17feet 6 inches (5.33 metres).  As many other pieces of the building emerged the true glory of this magnificent structure could be visualised.  Glimpses of the years of hard physical effort by the human mule train are depicted in archival photographs in the Glen A. Taylor collection.  The project aroused considerable interest from the media, scholars and photographers from home and abroad.  Gentry and nobility visited along with many visits from the notable archaeologist Sir Mortimer Wheeler.  During the ‘dig’ the 800th anniversary of the founding of Neath Abbey was commemorated with a celebration dinner at the Llewelyn Café in Neath.  At this function, long serving members were presented with specially struck medals. 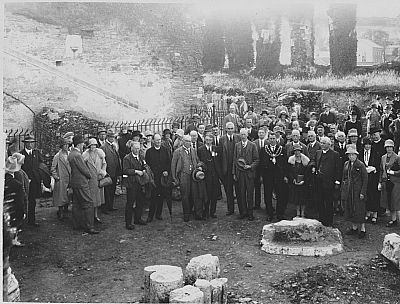 The work continued throughout the 1930’s but marred by the death of Glen A Taylor on 14th November 1935 at the early age of 55 years.  In memory his cap, overalls and boots were placed in a wooden box and buried in front of the base of the high altar.  A few years later a memorial wall tablet was erected in the bookstore below the night stairs.

C Stanley Thomas assumed leadership of the project until it ceased at the outbreak of war in 1939.  The continuing restoration and preservation of Neath Abbey passed to the Ministry of Works (now CADW).  It seems almost unbelievable that this small group of people collectively removed two hundred years of dereliction to reveal for us today the true glory of craftsmanship executed so many centuries before. 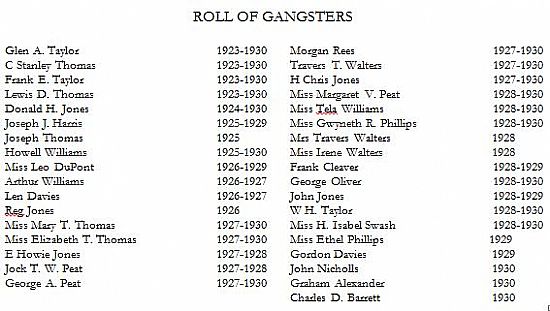