A collection of bits and pieces of local interest that may also be of use to researchers on a particular subject.  Not collated in any order, just for dipping into.

As the old saying goes: 'Where there's muck - there's brass', but if you were in Carmarthen in 1864 then you had better shift it quick before you lose it all together.  It seems they were up to their eyes in it! 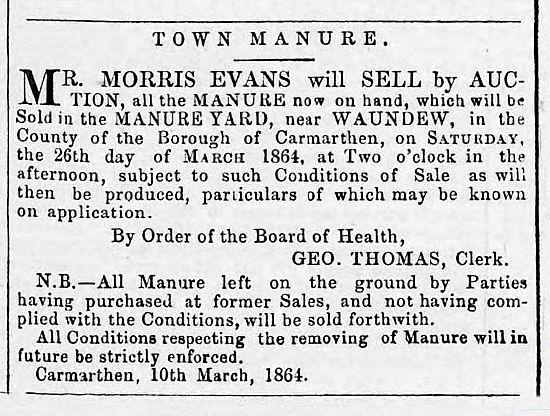 Such a Sad Case 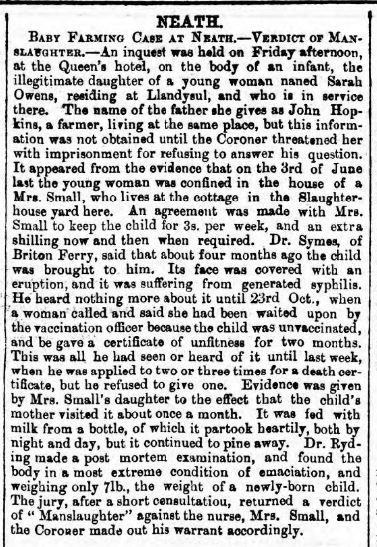 Baby Farming is the historical practice of accepting custody of an infant or child in exchange for payment in late-Victorian Era Britain and, less commonly, in Australia and the United States. If the infant was young, this usually included wet-nursing (breast-feeding by a woman not the mother). In many cases a child was placed with such women following an inwanted pregnancy due to effective and available birth control.

The Queens Hotel (latterly The Canterbury Arms) is located at the corner of Orchard Place and Queen Street in Neath.

A 'rare' example of a male manicuring ritual?

Micky Budd must have dearly loved his nailfile (maybe as much as the young lady from Hong Kong).  No report has been found thats tells of him having been reunited with it.  HMS seraph was scrapped on 20th December 1965 at Ward's  in  Briton Ferry and not Swansea as implied. It would have been like the old saying 'looking for a needle in a haystack'.

From the NAS Archive Collection

These days soccer teams are generally transported by the team coach with even the smallest amateur club hiring a conveyance from a local coach operator.  Not in 1923, this club took to the train.  The itinerary naturally accommodated those of a religious persuation (probably the majority at that time). 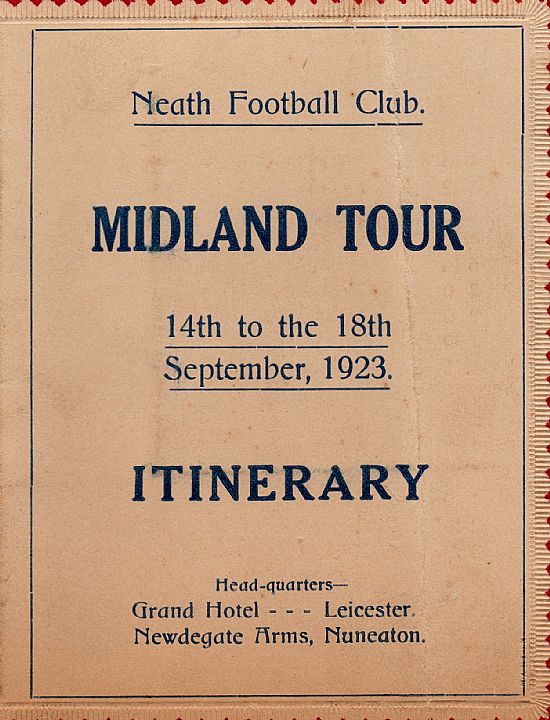 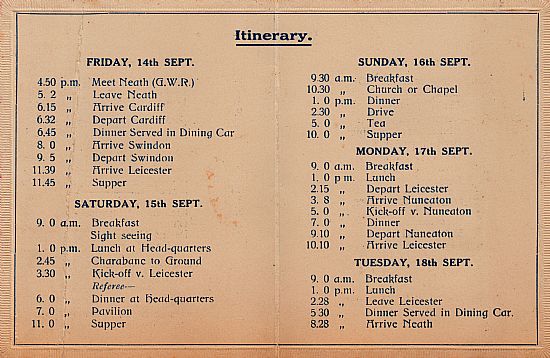 Looking through various pieces of ephemera sometimes unearths items long forgotten that remind us of how attitudes and allegiances change with the passing of time.  Here is one such item from the time when media communications were not as they are today.  Little did people then know about the murdering regime of terror the Russian people were suffering under the despot they were happy to call 'Uncle Joe'. 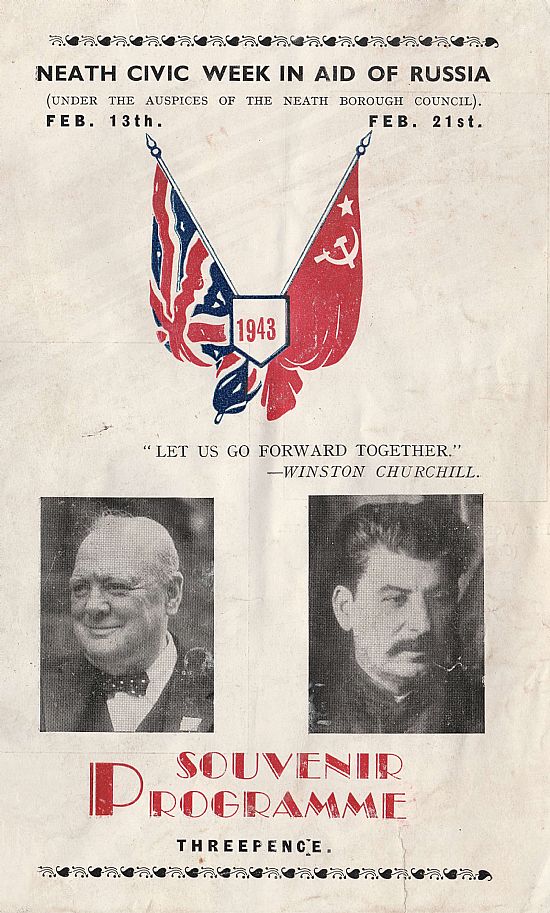 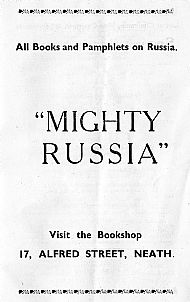 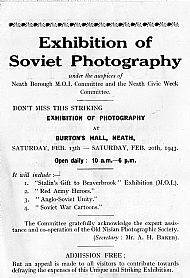 from the NAS archive

Electrical goods were supplied by D Richards or J Evans, both of Osterley Street, and you would have been charged 11/- (55p) for an electric fire. Sid Pearson would have sold you a radio so you could keep up with the latest craze. Your pharmaceutical needs would have been met by Miss Trick, Mr Wynn Jones, Miss Eiryl Jeffreys, or the Co-op Chemist.

With regard to repairs to your property, Sid Poles would have put new sashcords and weights in your windows and hung them, and let you have some spare wood for 17/- (85p). If your garden gate needed replacing, Vernon John would have made you a new one and hung it for £1/7/2d (£1.37p). Johns and Hampton would have carried out repairs to your roof, troughing etc. for £1/8/1d (£1.40 ½p) or even built you a new house if you wanted it, as would Lawford Gower and Sons. If the exterior of your house needed painting, T LI. Tucker would have completed the job for £4/5/0d (£4.25p).  Your plumbing needs would be met by Tom Davies.  If there was death in the family the undertaking might have been done by Saph's (who were also ironmongers and ships chandlers), Sid Poles or Lawford Gower and Son.  A tasteful wreath would have been supplied by S W Gilbert. Nurseryman, who also sold plants and delivered fresh vegetables by horse and cart.  A wreath would have cost you 10/6d (52½p).

note: the author is unknown at present

WHERE WAS THAT HOUSE?

Researchers frequently enquire about the location of some of the mansions and villas around the district.  Two sketches appeared in past NAS Transactions.  These have been redrawn and appear below.  Whilst they are of a schematic nature and not to scale; they may prove useful in general terms. you will notice that one property remains unlisted.  If you know which it is please contact us.  Similarly, if anyone would like to undertake the same exercise for other local areas, we would be pleased to receive them for posting here. 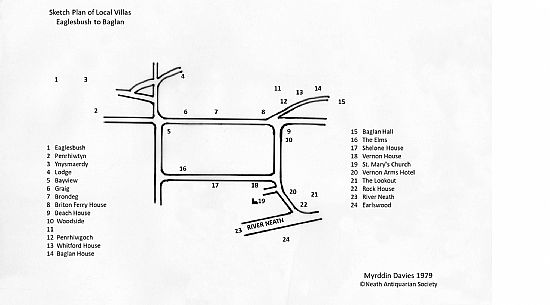 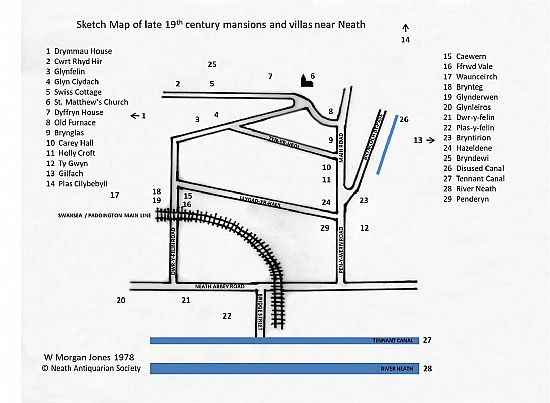 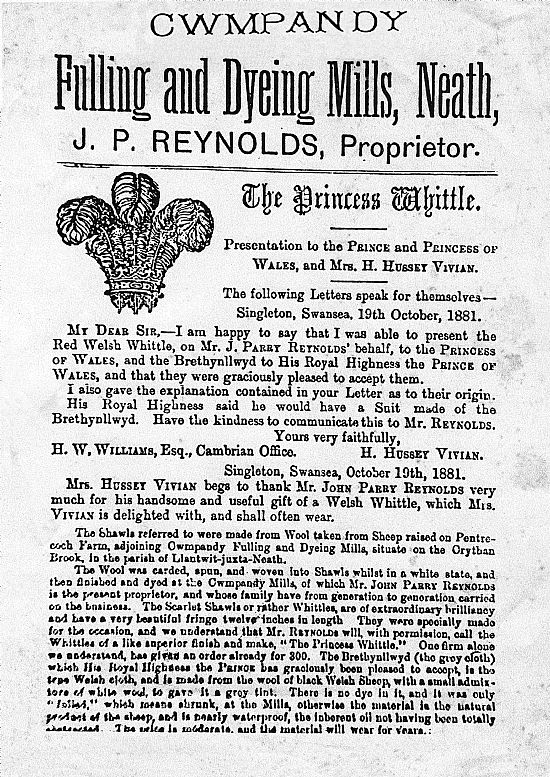 Don't mess with the women of Neath!

To set the scene - the year is 1803.  Britain has been at war with the French for 10 years.  A tenuous peace (The Peace of Amiens) between the two nations ended on 18th May when the French refused to withdraw from Dutch territory.  Napoleon is in the ascendancy and the threat of invasion is very real indeed.

'to defend ourselves as well as the weaker women and children among us.  There are in this town about 200 women who have been used to hard labour all the days of their lives, such as working in coal-pits, on the high roads, tilling the ground etc.. If you would grant us arms, that is light pikes… we do assure you that we could in a short time learn our exercise… I assure you we are not trifling with you, but serious in our proposal.' 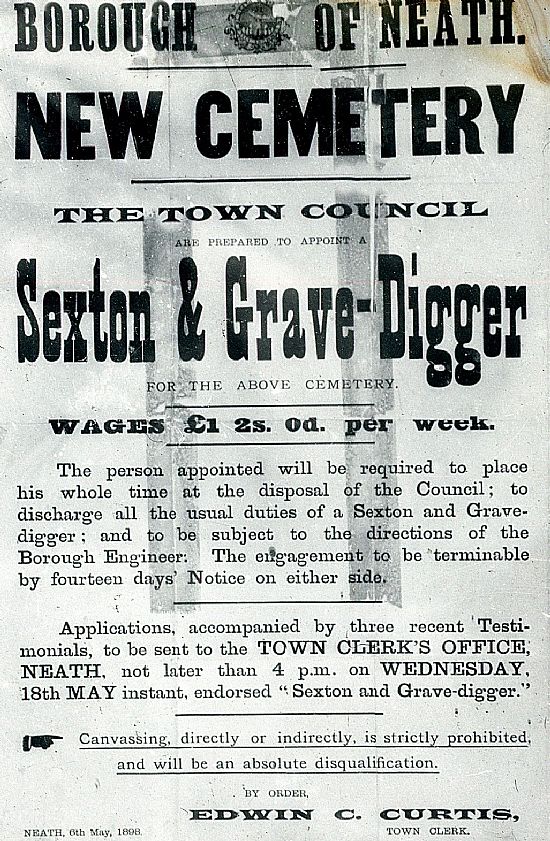 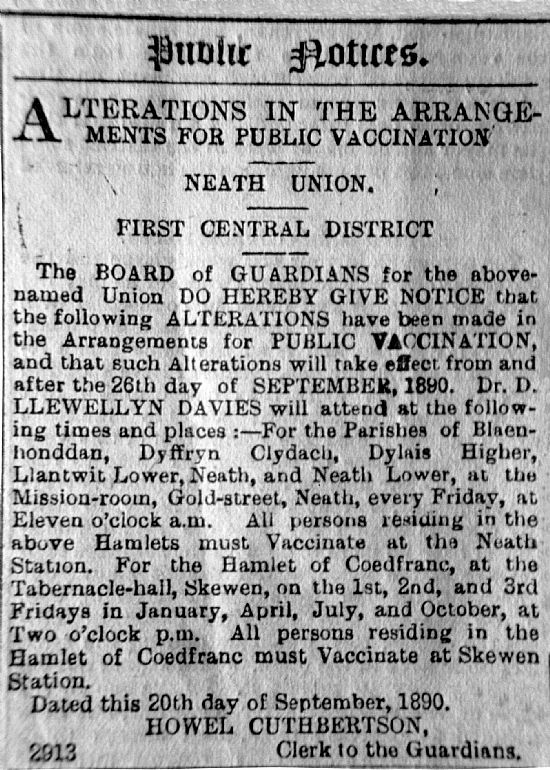 Was it a good night out in Skewen? 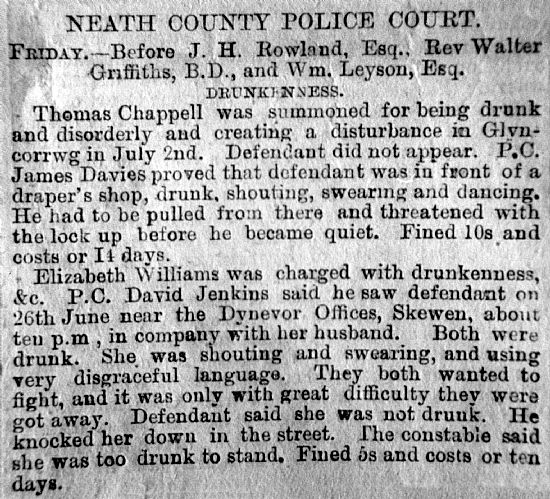 Although the town of Neath now regularly 'hosts' speciality events it remains best identified with the Great September Fair.  Originally (as with many fairs) this was a 'hiring and horse' fair, but evolved to become a street market and pleasure fair.  Even as late as 1936 the horse fair still (just) existed as this cutting from the SWEP of 11th September shows us. 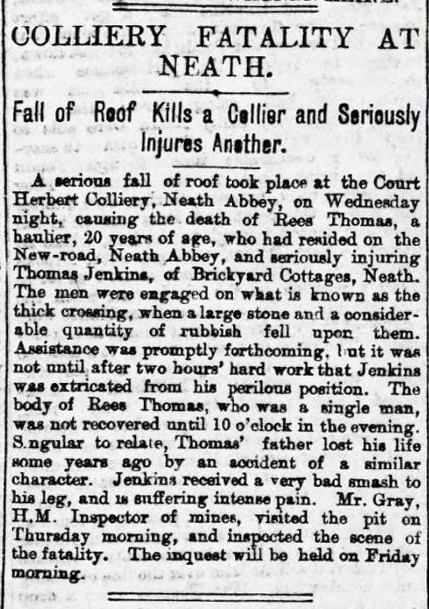 Like many villages in the district they were once well populated with small shops that catered for the needs of locals without them having to traipse to town.  Many shops also allowed goods to be had 'on account' meaning that many families avoided starvation in the middle of the pay week.  As mobility increased and shopping habits changed from just the bare essentials these small scale purveyors disappeared. This unedited list, relating, to Tonna is a prime example of how things have changed.

Today there are only two shops left in the Village. In 1935 this is the list of business in Tonna starting at Lock Hill, at the entrance to Tonna where Mr Daniels was the Lock keeper.

11)     In the woods opposite a shed used for watch repairing

21)     On to the Barley Mow which was pulled down, on this site is the Post office

Unfortunately, we have no idea who the author was.

Nothing at all to do with Neath but an humourous newspaper cutting found marking a page in one of the archive documents.  The date and source remain unknown at present. 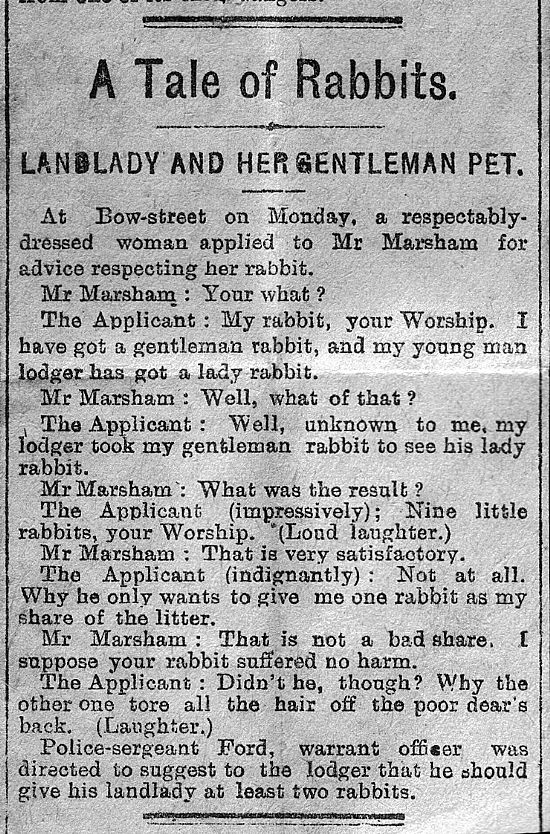 One of the lesser known local victims of the Titanic sinking.

MR EVAN ROBERTS AND THE SMOKER

Mr Evan Roberts, the revivalist, was in South Wales on Saturday, and was a traveller in the train which left Neath for Cardiff about noon.

Mr Wm. Griffiths, of 8, The Parade, Neath, who knows the revivalist very well, was a passenger in the same compartment and relates the following incident:-

Just as the train was leaving Neath Station a party of young men rushed in, crowding our coach, which was a corridor.  Many of them invaded our carriage, a non-smoker, and among the number was a young fellow who had a pipe in his mouth.  As he persisted in smoking, an elderly man requested him to desist, and in return was subjected to filthy abuse.

In the corner sat a gentleman busily reading.  He remonstrated with the smoker, and proceeding, read him a severe lecture on the evils of drinking and fast living.

By this time passengers from other compartments began to crowd around the door of our coach, and some of them, amused at the stranger's earnestness, began to laugh.

Then it was that the stranger indignantly turned upon them with the remark, "You may laugh and scoff as much as you like, but I am determined to stand for what is right, come what may."

The smoker, the cause of all the trouble, sneeringly remarked, "Get away man - you and your preaching! Only the other day that fellow Evan Roberts was preaching and kicking up a fuss all over the country; but what has come of him now, eh?"

A lady who had hitherto sat silent turned to the smoker with the admonition: "Take care what you say! Think of all the good that Evan Roberts did to many thousands of the likes of you."

As she spoke the stranger rose to his full height and, looking the smoker straight in the face, said: "I would like to know what you have to say about Evan Roberts: here is he standing before you."

The shame faced smoker made no attempt to reply.

Surely the incident should serve to bring home to railway companies the annoyance and indignity to which non-smoking passengers are now too often subjected.