WHAT CAN THE NEATH ANTIQUARIAN SOCIETY DO FOR YOU?

A Personal Example - ‘The Melincryddan Quay’

While many people may use the Neath Antiquarian Society (NAS) purely for Family History, the other resources and documents etc. that can be accessed may prove to be just as fascinating and open-up whole new areas of interest and understanding as it has done for me.

In my case, born and raised from the late 1950s in Ethel Street, Melin, up to my late-teens the area between our house and the River Neath proved to be an area of extensive exploration & fun. There were nonetheless, a number of intriguing and mysterious features encountered in this relatively small area. Whilst at the time there were far more important things to worry about (such as which marsh pond had the largest crabs!) these unknown entities remained as just that, lodged in my memory. However, that was until a few years ago when I first became aware of the NAS and the possibility, with their help, of maybe understanding some of these unresolved thoughts.

For me, it began quite recently with a memory from my youth regarding the remnants of what looked like an insignificant wall on the side of the river close to where the Crythan Brook (or ‘Vitral’ as we knew it) entered via a sluice near the canal. This stone construction seemed in a strange location to me, the remains of which were not very large, about 20’ long, 3’ wide and 4’ high. It formed a regular destination on most visits to the marshland, using it as part of some game or just as a vantage point for throwing stones, particularly at high-tide when the top would stand alone as an island that you could just about jump onto if you were brave/stupid enough! But why was the wall there?

On viewing a number of maps and documents held by the NAS it became clear that this wall was part of the ‘Melincryddan Quay’ originally built 250 years or-so ago. The inlet (or ‘pill’) at the location of the quay on the river had, prior to the building of the railway in the 1890s  under which the sluice was incorporated, originally coursed, and had stopped, at the top of approximately where Ethel Street was later built. In the late 1600s, offset at the end of this pill a 400’ x 20’ ‘floating dock’ was built with a ‘strong lock-gate’ to retain the tidal water. Later, a part of the Cryddan brook was diverted to help maintain the level. This dock was the first such ‘floating dock’ to be built in South Wales as shown below in an extract from a NAS booklet. 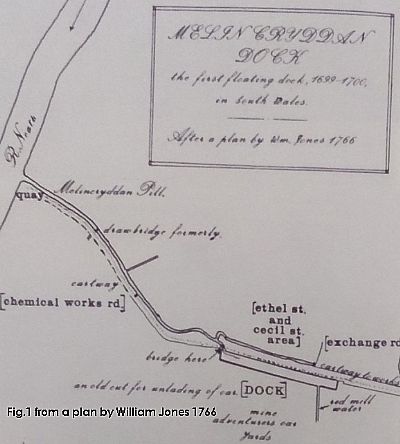 It was used to unload/load up to 30t boats with ore and finished goods respectively, the tidal water in the pill allowing sailing to and from the river so minimising horse-drawn transport to the quay area. The elevation at the top of both Ethel and Cecil Street is believed to be a consequence of raising the ground level over that area using copper slag from local industry, to allow building of the dock. The cartroad leading to the dock from the (then) main Crythan Road became the evocatively named ‘Chemical Works Road’. These discoveries from NAS resources that my own street was virtually part of history was a revelation to me and instilled further pride in my origins!

Of further interest was the observation that the brook had not always been a feature of this part of the Melin with the course being changed many times, just one example shown below, Fig.2, where it forked across Crythan Road – I had never considered that before. 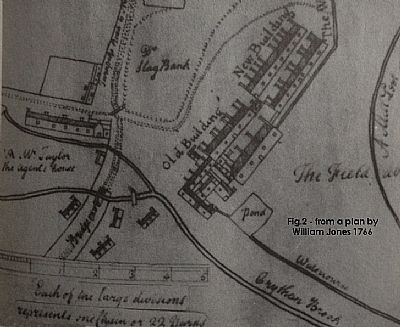 Originally, the brook had run from where it is now at Crythan Road down towards Briton Ferry, joining the river the other side of where the Metal Box factory is situated. The chronology of these maps from this period to present-day further showed how the whole of the Melin area developed from marshland to the industrial heartland of Neath with the subsequent introduction of railways and an increase in housing necessitated by the labour-intensive requirements of these industries.

These findings and numerous others that I have since become aware, have both answered many questions from my childhood and has fortunately/unfortunately(!) opened-up numerous other fascinating aspects of both the immediate and surrounding areas, many still to be fully investigated.

The use of historic maps, as above, within the NAS is only one part of the available resources; period local records, communications, photographs, plus the ability to search for similar items not held locally all add-up to an extensive set of reference materials to satisfy the most curious of minds. I have experienced great satisfaction from a better understanding of my early memories, with the option of undertaking more comprehensive research on these or other topics of interest at my own pace and with plenty of available support if needed.