The Neath Antiquarian Society (NAS) was founded in 1923 as a natural successor to the Neath Philosophical and Antiquarian Society which had its origins in 1834. The badge of the former Society, depicting the great seal of Neath Abbey, was adopted by the new NAS as its emblem.

The NAS was formed to maintain and restore ancient monuments of Neath and District; to study history, manners, customs, art and literature; to visit places of archaeological and architectural interest; to arrange lectures and meetings; to collate all available information that shall be of interest and value to the Society and to publish transactions; to set-up and maintain and, when possible, add to the Society's library, manuscripts, records, books and objects of interest; to maintain a Museum and Repository of records; and to pursue such other activities as are incidental to, or conducive of the attainments of these objects.

Soon after its foundation the Society was involved in the major excavation of Neath Abbey ruins. This took many years and involved the removal of over 7,000 tons of industrial waste. Later excavations took place at St. Margaret's Chapel and at Neath Castle.

The Society has had a number of different homes in the town but in 2001 it moved to its present accommodation at the Neath Mechanics' Institute in Church Place. In a joint venture with the West Glamorgan Archive Service the extensive archives of the Society were properly catalogued and made accessible to a wider readership. The Society shares the building with the West Glamorgan Archive Service. The Mechanics' Institute is only 5 minutes walk from the railway station or the bus station and is alongside St. Thomas' Church in the middle of the town. 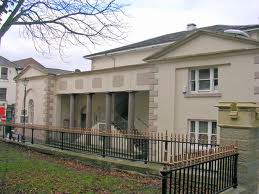 Meetings are held monthly at 7 pm on the third Monday of each month from September to April at the Old Town Hall, Church Place, Neath (pictured left).

A guest speaker is arranged for each meeting. The Society organises a visit to a place of historical interest each September and may arrange other visits as appropriate.

The Society maintains an extensive library and a collection of manuscripts, records and other objects of interest at the Mechanics' Institute in Church Place. These are accessible to the general public. Members may withdraw library books on loan. There is also a photographic collection.  Copies of the images are available subject to the NAS Reproduction/Permissions Policy, dependant upon the purpose for which the copy is required, and completion of the necessary form and payment of the fee levied.