Buried in the churchyard of St Catwg’s Cadoxton, with the exception of one family member, is the complete lineage of a branch of the Kirkhouse clan.  Head of this branch of the family was the eminent engineer William Kirkhouse who will be remembered as constructor of the Tennant Canal.  This story, however, is about William’s third son, also named William Kirkhouse.  His story will also account for the missing family member.

William was born in 1814 and baptised at St Catwg’s on 2nd January 1815.  His early civil engineering tuition was obtained when he assisted his father with projects in and around Neath and Swansea.  A confident young man he set off from Dulais Fach to see the Coronation procession of 1838 which he witnessed whilst stood in Parliament Street.  This was no small feat in those days.  He first travelled by barge on the Tennant Canal to Swansea.  At Swansea he took the packet steamer Palmerston to Bristol and there he boarded a coach bound for London. This one-way trip to London took him three days to complete.

With his civil engineering background William was fortunate enough to be employed by Brunel.  He surveyed portions of the Great Western Railway between Maidenhead and Reading which opened as far as Reading in 1840.  That same year, now aged 26, he set up in business with his brother John and advertised thus in The Cambrian newspaper, 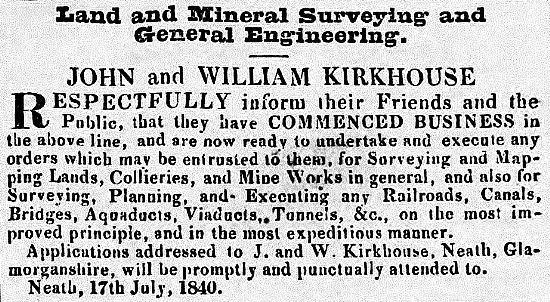 In 1844 an incident occurred at Swansea Race Course (commonly called 'Swansea and Neath races', the course was on Crymlyn Burrows and meetings were held during August), reveals that William was a many facetted man.  Like any man- about-town William’s attire included a walking cane, and not just any walking cane!  On this notable day at the races William was at the 'Vale of Neath booth' when he witnessed a very drunk racegoer being taken into custody.  William took exception to the rough handling of the drunk by the police and intervened.  A scuffle with the arresting police-sergeant resulted in William being tripped to the ground.  When he got to his feet William pulled out a hidden blade from his walking cane and thrust it at the police-sergeant.  The police-sergeant, unscathed, disarmed William.  Meanwhile, John Kirkhouse on seeing his brother on the floor approached the scuffling parties demanding to know what was going on.  John’s walking stick was taken away from him by a constable who pulled out a similarly concealed blade from this walking cane.  Both brothers were 'collared' and charged with assault and disorderly conduct.  At their trial both were found guilty with William being fined a total of £3 and John £2.

In 1849 William left Swansea for Australia on the 294 ton barque Ann Smith of Aberdeen.  The only other passengers on the voyage were David Williams (a carpenter of Swansea), his wife and their two boys.   Their passage took them around The Cape of Good Hope arriving in Australia on 18th December 1849.  William practiced his profession as a surveyor in Adelaide and Melbourne.  In the 1850's he purchased a great deal of land in the first subdivision of the new town of Melbourne.  At the discovery of gold, the gold fever caught him, and he joined in the gold rush and 'roughed it' in Ballarat and other places.  It was in Ballarat that his younger brother George joined him in the search for gold and after a digger’s life and a pocketful of gold George decided to return home.  In 1869 George made his way to Melbourne and booked his passage home.  On the morning of his departure George’s non-appearance prompted the hotel’s landlord to check his room.  George was found dead in his room; his death caused by a rupture of the aorta.  In the January of 1870 William left Australia returning to the family home in Pen-yr-Alley, Skewen.

William’s share from prospecting for gold allowed him to travel extensively.  His early travels took him to New Zealand, the United States and Canada and back to Australia.  On a passage from San Francisco to New Zealand William was shipwrecked off the coast of Honolulu.  In 1894, now aged 80, he returned to Wales and made his home in Llansamlet.  However, it was not the end of his love for travelling as in December 1895 he set off on his own on a trip to Egypt and Palestine and stayed at Jerusalem until May 1896.

William died on 24th September 1897, at Lon-las Cottage, Llansamlet, the house of Mr and Mrs John Jordan.  William never married and none of his brothers or sisters had children, therefore, with his death his father's direct family line became extinct. 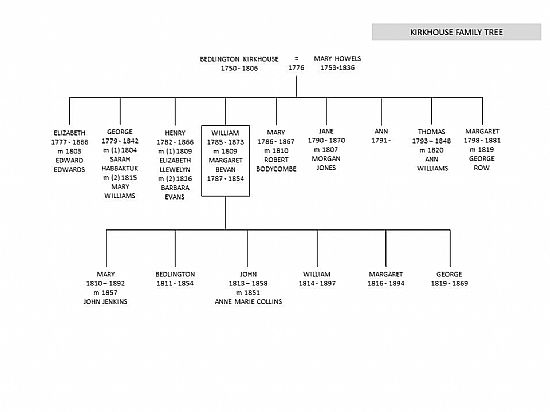 Accordingly his estate was inherited by distant members of the Kirkhouse clan.  The beneficiaries of William’s estate were:

Robert Bodycomb (probably the son of William's aunt Mary i.e. his cousin) was left real estate at 12 Ireland Street, West Melbourne, Colony of Victoria, Australia, which was valued at £780.

Gladys Kirkhouse (the daughter of Robert Kirkhouse of Ynysymond, who was the son of Henry Kirkhouse by his second wife, Barbara Evans) inherited a cash sum of £100.

The 'altar style' tomb in Cadoxton churchyard contains the bodies of nine persons and has the following inscriptions on a rectangular frustum of a pyramid; 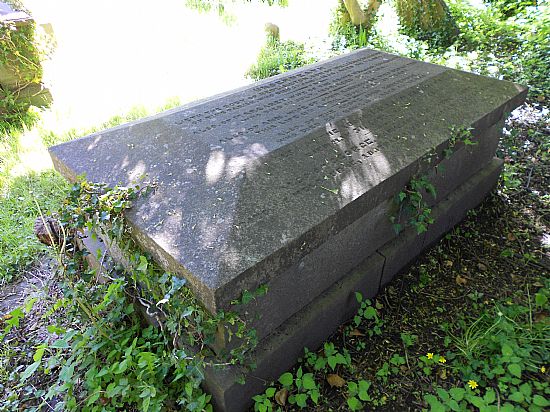 UNDERNEATH LIETH THE BODY OF BEDLINGTON, SON OF WILLIAM KIRKHOUSE,

ALSO, OF MARGARET, WIFE OF THE ABOVE WILLIAM KIRKHOUSE,

ALSO, OF THE ABOVE JOHN KIRKHOUSE,

ALSO, OF THE ABOVE WILLIAM KIRKHOUSE,

ALSO OF GEORGE, YOUNGEST SON OF THE ABOVE,

ALSO WILLIAM, SON OF THE AFORESAID

ALSO OF MARY JENKINS. DAUGHTER OF THE AFORESAID WILLIAM KIRKHOUSE.

ALSO MARGARET KIRKHOUSE DAUGHTER OF THE ABOVE,